What's the rationale behind this choice of resistor for a BJT common collector amplifer?

As part of a design lab, we're using a common collector amplifier, and the instructor's choice for the emitter resistor makes no sense to me. 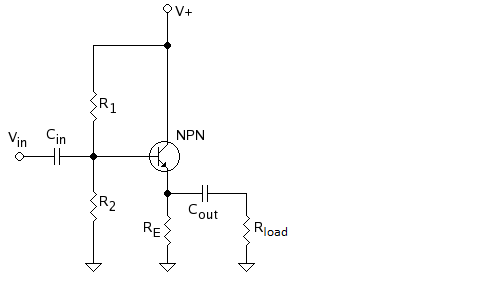 The power rail is at V+=15 volts, and the load is 8 ohms. The design specifications give us a power across the load of 5mW. We assume capacitors are large enough to ignore for the AC signal.

We want maximum voltage swing, so we say the emitter DC voltage is approximately 7.5V, half of our positive rail... ok, makes sense for a rough design. From the given power and resistance, we know the current through the load has an amplitude 35mA, and the voltage across the load has an amplitude of 0.28V, from ohm's law and the usual power equations. Then we say the total emitter voltage is AC + DC, and swings from 7.22V to 7.78V.

Here's the part that confuses me: the instructor claims that the emitter resistance should follow the relation

Where does this relation come from? What's the rationale behind it?

By the problem description, the amplifier is to source a 35mA sinusoidal current through the load.

Note also that the BJT current is (assuming the transistor is active) always out of the emitter.

Thus, during the negative half cycle, the current through the emitter resistor is the sum of the load current and BJT emitter current.

Since it is already given that the emitter voltage should be \$7.22V\$ at the negative peak, and we know the resistor current is at least \$35mA\$ then, Ohm's Law gives

In other words, we have established an upper bound on the value of \$R_E\$.

We want maximum voltage swing, so we say the emitter DC voltage is approximately 7.5V, half of our positive rail...

For sinusoidal operation and assuming the capacitor voltage is constant (the capacitor is an AC short circuit) and equal to the DC emitter voltage \$V_E\$, we have:

Typically, one wants these to be equal in magnitude, i.e., we want the output voltage swing to be symmetric.

Basically you want \$V_E\$ to be nominally half the supply rail AND, you want to be able to deliver a peak current to the load of 35mA. When the negative peak current is being delivered, the emitter voltage will reduce to 7.22V (7.5V - \$\sqrt2\cdot 20mV^1\$).

A little bit of an explanation is here

12
Where does the Maximum Emitter-Base Voltage come from?
0
Is my understanding of how this amplifier circuit works correct?
0
Why is voltage output inverted between common-emitter and common-collector amplifiers?
9
BJT Puzzler: Common Emitter or Emitter Follower?
4
Assumptions when designing an amplifier
0
Collector current for common-emitter audio amplifier
1
Choosing Collector Current for Transistor Amplifer
0
Maximum Symmetrical Swing for BJT Amplifier
0
Fixing the Collector Current for a BJT amplifier