When I try to burn a bootloader to my atmega328 the arduino IDE gives me an error:

When I burn a program to my avr chip i change the port to com3 and it works just fine, but I only know how to burn the bootloader via the arduino IDE and do not know how to change the avrdude preferences to use com3 instead of "usb". Any help on how to do that?

This implies you are using the usual USB cable to load software onto an Arduino board from the Arduino IDE.

When I try to burn a bootloader to my [ATmega328,] the [Arduino] IDE gives me an error

To burn the bootloader, you'll need to buy an AVR-ISP (in-system programmer), USBtinyISP or build a ParallelProgrammer. The programmer should be connected to the ICSP pins (the 2 by 3 pin header)

Sparkfun have an excellent tutorial - it is well worth reading carefully all the way through.

Some comments on configuring the Arduino IDE

The Arduino IDE is heavily criticised by professional engineers and developers because it is very simplified and lacks a great many features that those people expect to find in their tools. It is also criticized for encouraging bad programming habits. However it is aimed at beginners and many people think it does a good job of making it easy to get started.

In the "Tools" menu of the IDE you find "Board" and "Programmer". Typically the definition of the board contains a definition of what programmer is to be used. For example in my IDE I have an entry something like "ATtiny85 (with Arduino as ISP)" which means the IDE expects you to be using a separate Arduino board as a programmer. 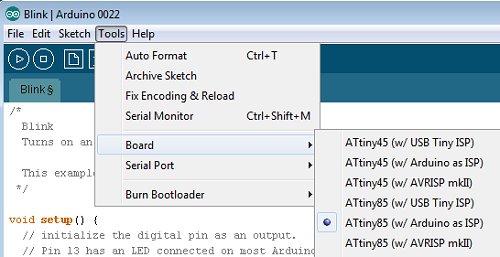 However, even after selecting this, you can go to the "Programmer" submenu and select a different programmer to be used to program the target "board". This works well for loading programs (sketches) onto any AVR.

I haven't burned a bootloader but I imagine this is how you select a programmer for boards that are normally programmed via the USB/serial connection.

Not the answer you're looking for? Browse other questions tagged avr atmega atmel avrdude or ask your own question.

7
Arduino Bootloader
6
Bit bang ATmega328 with Arduino bootloader using AVRDUDE
3
Am I able to burn a bootloader and program with an AVR ISP?
5
Does Arduino need the bootloader if programmed with programmer?
1
Burning arduino bootloader with avrdude and AVR dragon on ATmega32U4 failing
5
Burn Micronucleus bootloader to use ATtiny85 via USB (AVRDUDE)
2
ATMEGA328p-AU BootLoader
0
Wrong device signature for ATmega32A-PU while burning MightyCore bootloader