I'm making a little linear PSU for my lab. Based on the good ol' LM338K. I fried one last night and I'm still trying to figure out why. I think it might be EMF from my transformer.

I have a transformer, a toroidal 220V to 12V 200W. I noticed it was built as two coils in parallel, so I figured i could connect the coils in series to make it 24V 100W. Indeed, this seems to work (when they're in the right phase, of course).

Now, to reduce dissipation on the LM338K, I decided to add a small relay and connect it like this (let's call the point where the two coils are joined together the "center tap").

This allows my PSU to start at 12VAC -> diode bridge + capacitor -> LM338K (I added all the suggested external components, especially the discharge diodes from Vout to Vin).

To control the relay, I have a PIC (which also serves as voltmeter and current meter). I programmed the PIC so that when the output is over 9V, it switches to the full 24V. When it's below 8V, it switches back to 12V coil.

To recap: here's the schematic for the relevant part. 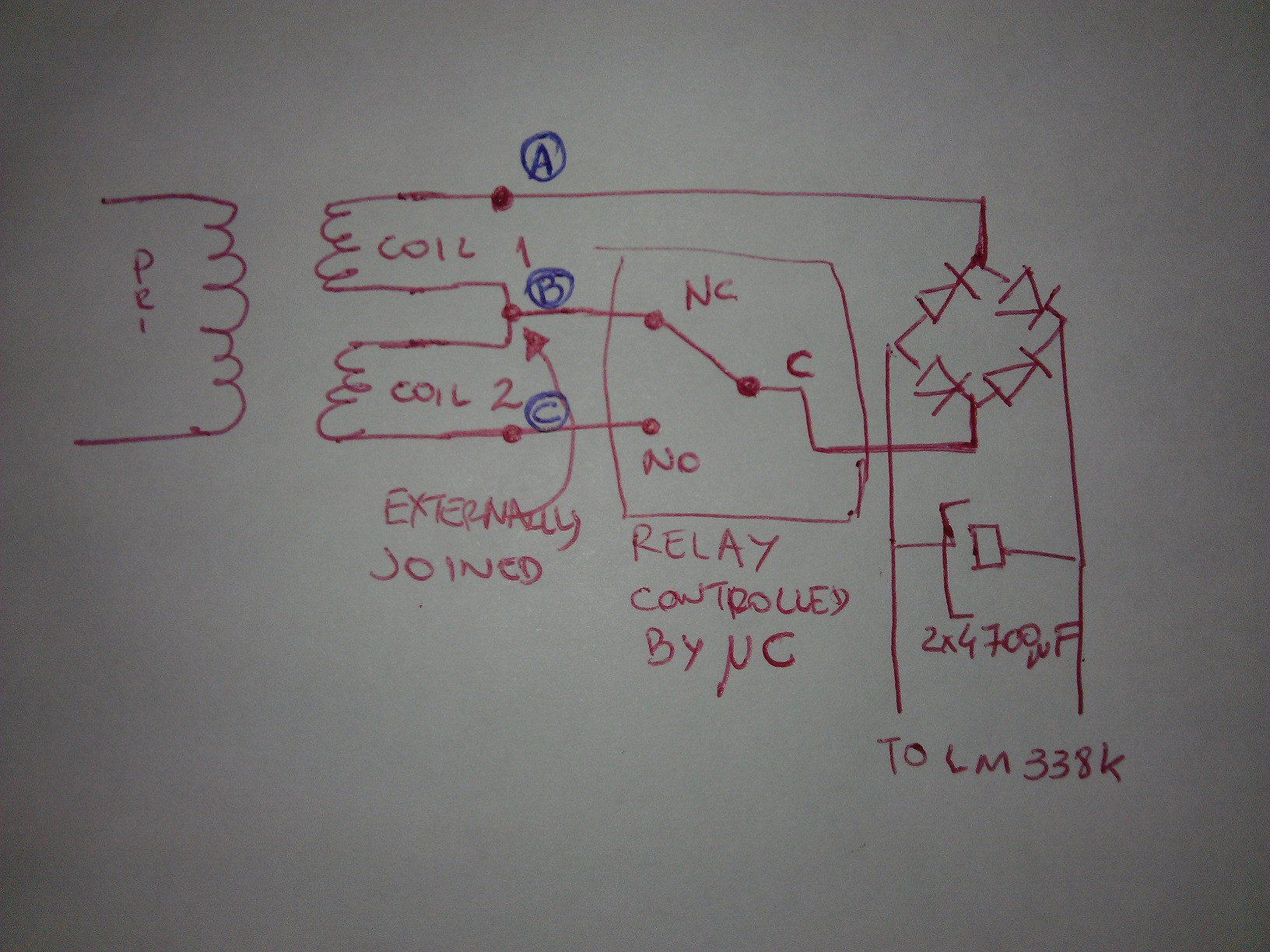 Now, I was testing this last night. Something weird happened. I dialed my pot to 12V, I heard the clicking of the relay and I had effectively 12VDC at the output. When I loaded it with a 120R resistor, all was fine. Then I used a 12V 50W lamp. I gave it 6V. it was working good, regulated excellent. So i started dialing the voltage up to 12V and it started clicking like crazy (I suppose the hysteresis on my program was too quick), it switched 12/24 a few tens of times and then the voltage output went to 0.3V. I quickly shut everything down. Discharged the 2x4700uF caps at the diode bridge output, and turned it back on. It was working again. Then I noticed the voltage was a little off and smelled of "heat": it was the potentiometer glowing inside! The voltage output was = Vin. My LM338K was dead (this is not a fake 338K as the autopsy revealed the component is genuine: i took the cap off and it had a proper copper heatsink and several bond wires for high current pins).

I'm thinking I didn't do anything wrong with this. All current and voltages were within spec of the regulator. The 338 has enough protections (my dad's 30 year old power supply has seen worse and the 338 never burned. Only that time when he accidentally hit a TV's B+ ..60V).

The only thing I can think went wrong is that, when the coil is switched over, I have an open circuit on the transformer for a few milliseconds. Then the other coil is connected. I think what could have happened is EMF from the coil switching making a very high voltage spike appear on the 338 and frying it.

Does this make sense? If EMF could be the problem, how could I solve this? I suppose a snubber network somewhere should do the work, but I'm not sure where. In my schematic, should a snubber network go between: - A and C? - A-B and B-C - AB, BC and AC?

Also: how would I calculate the value for an RC network of this type? The relay specs 10mS "Operate time" and 5mS "release time".

Switching an inductor may make it work like a boost converter, and thus temporarily generate a higher voltage.

One way of making sure that the input voltage to the LM338 converter is no higher than allowed, is to wire a high-wattage (between 600W and 5 kW) TVS diode with an appropriate clamping max voltage biased against the input voltage and ground.

Also, if you're switching on the measured/actual output voltage, then you can get into oscillation. It would be safer to switch on "desired" output voltage, and let the regulator make sure it gets there. You could perhaps feed the bias voltage from the regulator ADJ into your microcontroller with a resistive divider to achieve this. Or you could just use a comparator with a pre-set trip point to drive/un-drive the relay.

Your system definetely oscillated, because of the wrong point of sampling, and wrong switching timing. So on each cycle the initial charge of the capacitor is quite large. What you've probably done is drive the regulator into over current as if it was being powered up 100 times/sec (in case of 50Hz). 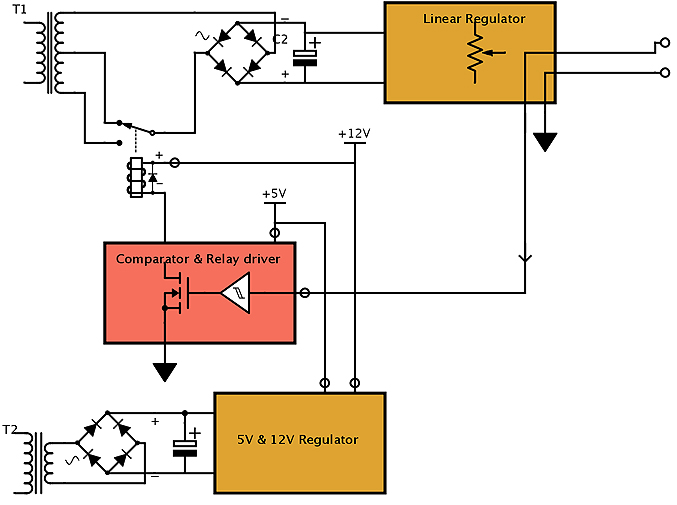 You can use this comparator to monitoring the output of psu, but don't mix grounds. Use a separate for Opamp power. Switch at around 10V because 9V and 12V used widely and it is not likely to switch at this levels. Look at the MCP6541 data sheet for calculations assistance if you want to to change the trip voltage.