For a better detection of the modulated signal with the diode detector below, one requirement is that the time constant of the RC filter conforms to:

How exactly can we prove that?

The formula is derived from practical experiences and not from mathematical 1st principles. It is unprovable other than by being practical and thinking what a diode detector has to achieve.

Firstly, the formula states that RC has to be equal to or greater than \$\dfrac{1}{\omega_c}\$.

If the RC time constant were too short there would be significant levels (ripple) of the carrier frequency on the output - this is not what is wanted from a diode detector (or an AC rectifier in a power supply) BUT, it's never going to be a perfect brick wall filter and so carrier ripple has to be acceptable (to some degree).

Personally, I would like to see the RC time constant 5 times greater than \$\dfrac{1}{\omega_c}\$

At the other end of the scale, RC cannot be too big or it will start to significantly attenuate high frequencies in the "detected" analogue waveform that is represented by \$\dfrac{1}{\omega_m}\$.

Here is a picture that hopefully explains: - 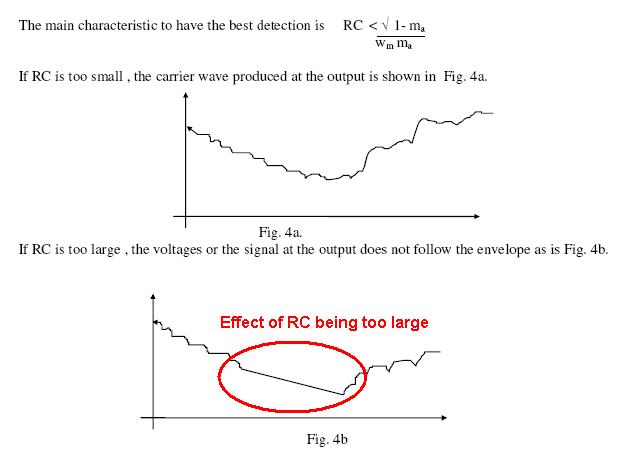 This picture was taken from here and basically is saying, if the modulation index is too high for the value of RC chosen there will come a point in the detection of the signal that the RC time constant is too long.

You should also note that as the modulation index approaches 1, the RC time constant has to theoretically be very small and this will make it likely clash with the requirement for it to be significantly greater than \$\dfrac{1}{\omega_c}\$.

your derivation is partially correct. Pls checkout my images for complete derivation. 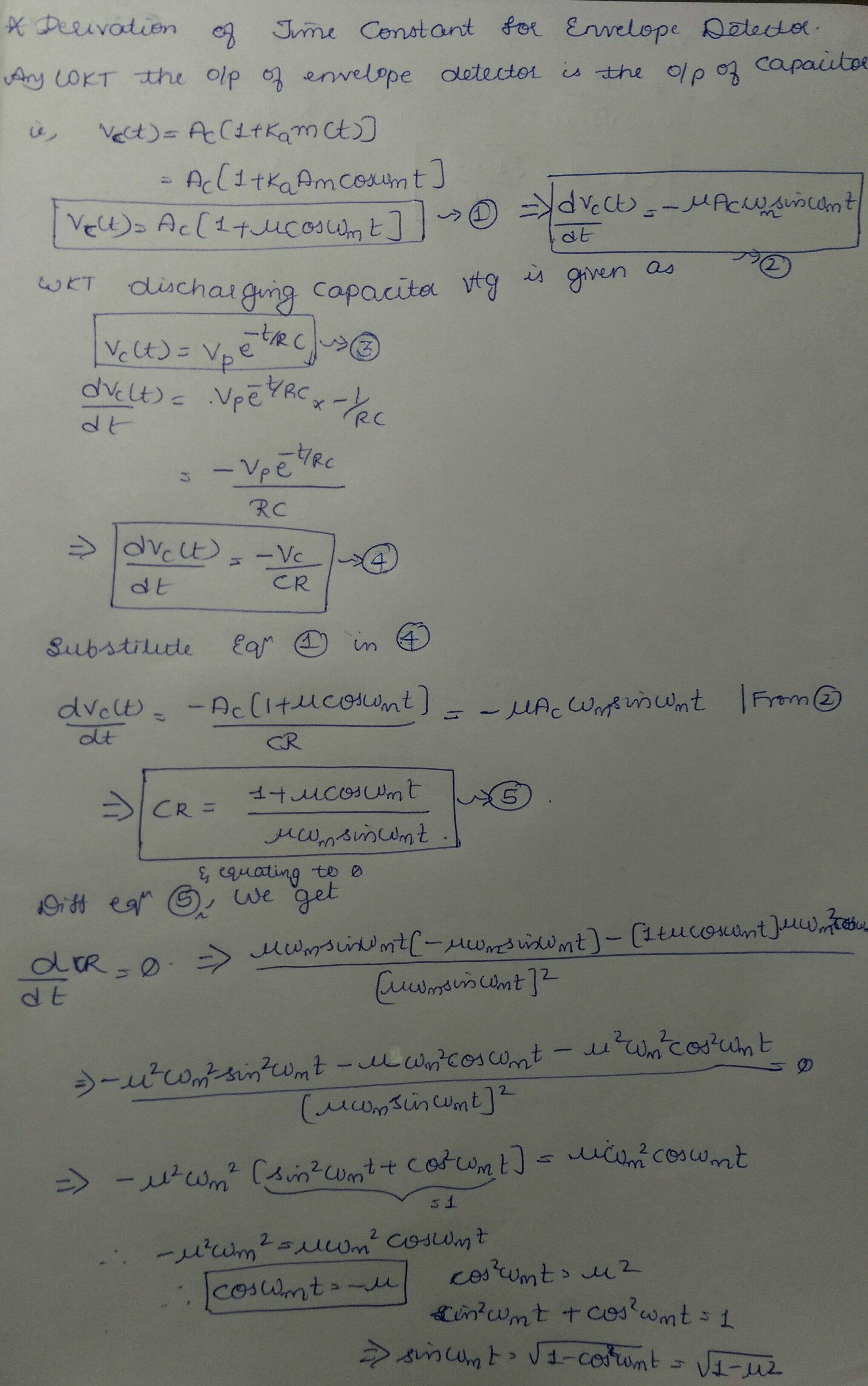 I had the same doubt, so I cooked up the following derivation after looking up various links such as those given by Andy aka. My derivation of the formula gets every term in it except the factor of \$\sqrt{1-\mu^2}\$ which is puzzling me. Here goes -

For the first inequality, note that the time required for a capacitor to discharge to \$99\%\$ of its initial charge is about \$5RC\$. Now the output must not fall appreciably between two consecutive 'peaks' of the modulated wave. The time between arrival of two peaks of input modulated wave is about \$\dfrac{2\pi}{\omega_c}\$ so we want \$5RC \gg \dfrac{2\pi}{\omega_c}\$ which we can write as \$RC \gg \dfrac1{\omega_c}\$. The exact constants \$5\$ and \$2\pi\$ need not be specified since equality is not going to take place, and "5" is not an exact bound anyway.

Now the second inequality is required to get rid of negative peak clipping.

Now I don't seem to get the factor of \$\sqrt{1-\mu^2}\$ over here. I think I have done it almost right, but some part may need some refining to bring in this factor. Perhaps someone may clarify on this point?

Not the answer you're looking for? Browse other questions tagged modulation demodulation or ask your own question.

0
The criterias to select peak detector capacitance and resistance

1
How can I do a frequency sweep when the frequency modulation index is dependent on the amplitude?
5
FM Quadrature detector - is it the best choice
2
Definition of \$\mu\$
1
AM Demodulation of Square wave
4
Modulation scheme for simple signal generator
2
Select Phase Detector Cutoff Frequency? Phase Locked Loop FM Demodulation
0
Equation for square law circuit modulator
1
Envelope detector and distortions
0
Spectrum of FM signal?