I am following the Standard Sensor Performance Parameters from the "MemsIndustryGroup" to test some Gyroscopes: 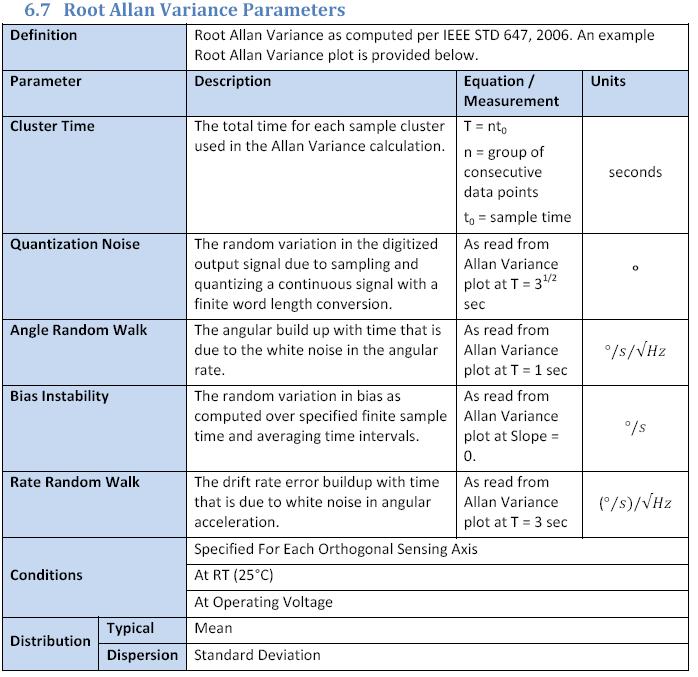 I conducted a test and plotted the square root of AVAR (Allan Deviation) against Time per IEEE Std 952-1997 using MATLAB: 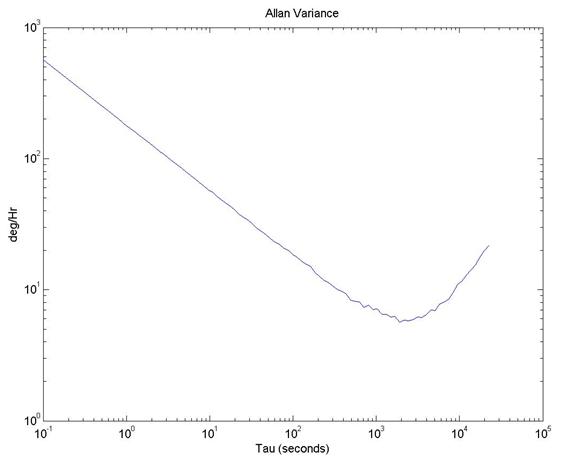 I am confused however, by how I can read the Quantization Noise, Angle Random Walk, Bias Instability, and Rate Random Walk from this plot. The Standard Sensor Performance Parameters state to read them when T = 3^1/2, T = 1, Slope = 0, T = 3.

When I read these values, my results look like this: 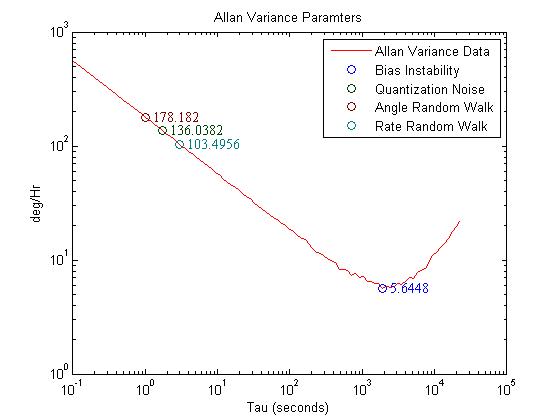 I was wondering if I am doing this correctly. The example plots from both Standard Sensor Performance Parameters and IEEE involve slope lines that do not have anything to do with reading my plot: 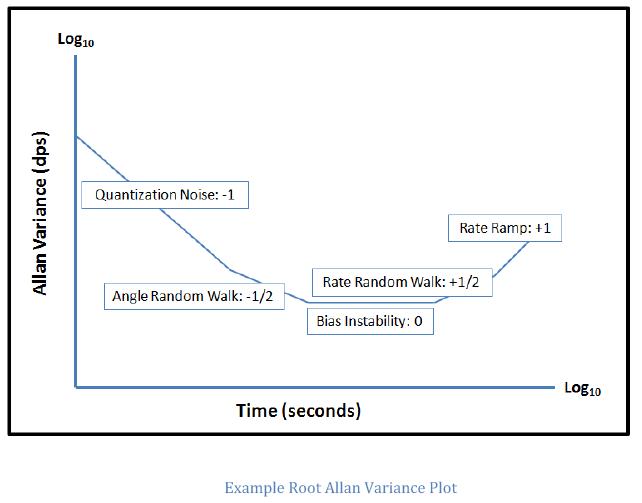 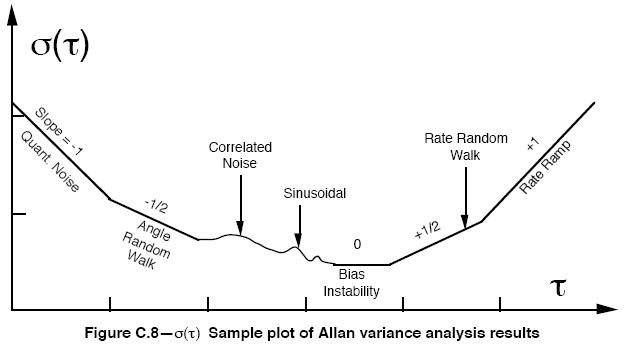 What is the proper way to read these noise parameters from my Allan Variance/Allan Deviation plot?

Is my approach of reading the values correct, or should I try to make my graphs use the slopes as seen in the two examples? Etc.

The example plots show how five different parameters of the device characteristics contribute to the overall shape of the Allan Variance plot.

However, it does not follow that you can always unambiguously derive the five parameters from any given plot. Depending on the relative values of the parameters, the effects of one or more of them may be completely masked by the others.

The quantization noise seems not to influence your root AV curve at all. (I can see no part with slope of -1). Thus it seems negligible. Perhaps you use a very high resolution ADC to sample the gyro data or you decimate the data before you perform your AV calculations? I've never worked with the quantization noise, but I suppose you would do it the same way as with ARW; i.e. you find the part of the curve with slope of -1, if neccessary extend this with a straight line so it passes \$\tau = 3^{0.5}\$ seconds, and convert to proper units.

As for bias instability, I believe it requires that you actually have a part of the root AV curve which is actually flat (i.e. slope of 0) as shown in your 3rd and 4th figure. The bias instability is then simply the level of the flat part of the curve. (No further conversion needed). This would be the part of the curve where further integrating the rate signal (i.e. longer integrating time) would no longer increase the accuracy of your reading. (White noise (ARW) drops when you average over longer time periods, flicker noise (bias instability) does not drop when you average over longer time periods).

Not the answer you're looking for? Browse other questions tagged noise standard mems or ask your own question.

6
Reduce noise from a Hall effect sensor
6
MPU6050 accel/gyro noise that behaves strangely - what might be doing this?
1
Allan std deviation: why do we need to read the values at specific sample times?
0
Effective impedance calculation for noise removal from supply
2
Considerations for transmitting the signal from a MEMS microphone over a short cable?
2
What is the origin of multiplicative noise from a DSLR sensor?
0
How is the intensity of sensor noise determined experimentally?