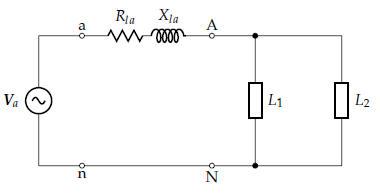 LOOK WHAT I HAVE TRIED:

When I throw this equation at wolfram alpha, It says there's no solution:

These two currents are equal so you should be able to solve for VAN.

You can use Bhaskara's formula to solve this equation. Apparently, there are two valid solutions.