I'd like to fully understand the circuit marked as "Minimum Parts" at page 5 in LM386's datasheet: 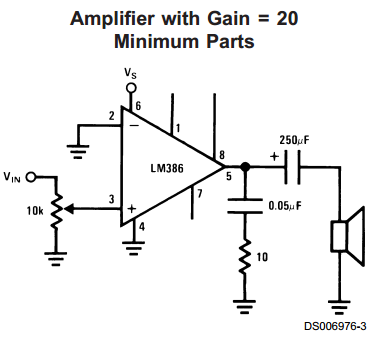 Is there any reason for 10k resistance at the input potentiometer or is it just an arbitrary value?

It's more-or-less arbitrary. 20K or 5K would be fine too, 10M, not so much. They suggest less than 250K source resistance, which would imply a 1M pot driven from a low impedance source would be just okay.

For an audio application, should that be a logarithmic pot?

There is a resistor and a capacitor connected in series to ground right after the output. It looks like a low-pass filter to me, but I've usually seen those with the load connected between R and C, not parallel to both. What's going on?

It's a type of compensation, to keep the amplifier from oscillating. You may notice that when you want it to be an oscillator, it's not required. Take note also of the minimum gain requirement. The part is only guaranteed stable for gain > 9. As Brian Drummond points out, it is a Zobel network that helps make the speaker look less inductive and more resistive.

Why is there a 250uF polarized capacitor right before the speaker? Is it just a DC blocking cap?

Why 250uF and not other value? Perhaps just a high value so that the resulting high-pass filter cutoff is low enough?

It needs to be be low impedance compared to the speaker at the lowest frequency of interest. A 250uF capacitor has 8 ohms reactance at ~80Hz.

Not the answer you're looking for? Browse other questions tagged amplifier lm386 or ask your own question.

38
Why should I use a logarithmic pot for audio applications?
3
What is the role of these capacitors?

1
Maximize performance LM386 and 4Ohm speaker
6
What is the purpose of the 250uF capacitor in the LM386 circuit?
0
What is a good capacitance to use for a low pass and high pass filter?
3
LM386 Amplifier not amplifying
1
Not understanding aspects of the LM386 amp
2
LM386 audio amplifier with push-pull output
0
Op-amp unity gain buffer introduces distortion in the LM386 circuit with high gain factor
2
Why am I getting crackling / popping with my LM386 audio amplifier?