How does iPhone detect when dock connector is connected to an audio input?

I'm trying to solve a seemingly simple problem with (hopefully) an equally simple solution. I'm strictly an amateur when it comes to electronics, so I'm hoping someone here can guide me in the right direction so I don't do something stupid and fry my iPhone...

I have an iPhone dock in my car, and the dock routes the audio output from the iPhone's dock connector to the line-in jack on my car's receiver. Over time, the line-in jack on the car's receiver has become worn and loose, and as a result it seems to disconnect for just a tiny fraction of a second whenever I go over a bump in the road. The disconnect/reconnect cycle is quick enough to be inaudible, but the iPhone detects it and pauses audio playback because it thinks I've unplugged it from the dock. This is annoying, because I have to keep hitting the play button on my phone every time I go over a bump.

Based on my (admittedly limited) knowledge of electronics, I'm guessing that the iPhone detects the disconnect by measuring the impedance on the audio output and pausing playback when the output impedance goes above some threshold. Based on that assumption, my theory is that I should be able to build a cable that will fool the iPhone by providing a small load on the audio output circuit even when the other end of the cable is completely disconnected. That way, when I go over a bump and the line-in jack does its microsecond-disconnect-thing, the iPhone will still see a load and think everything is still connected.

In its simplest form, this could just be a resistor strung across the two wires of the audio cable, but I have no idea what value to use for the resistor. I also don't want to fry my iPhone, so I thought I'd ask around first to make sure I'm not doing something totally stupid.

Will this work? Is it as simple as the resistor idea, or do I need something more complex? 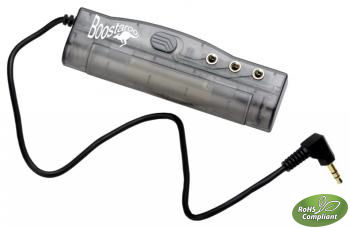 But your issue doesn't require a parallel load. The powered splitter is just a couple of opamps as buffers and amplifiers, and is the same thing you need.

An opamp in buffer mode, will provide a constant load for the iPhone that should prevent the impedance check from pausing the music, and will prevent any lowering of volume that a parallel load would. Since it is being used to buffer and not amplify, there should be no clipping and very little to no audiable change in sound quality. 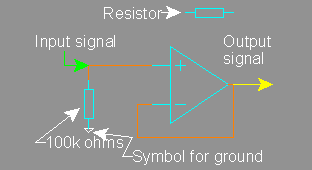 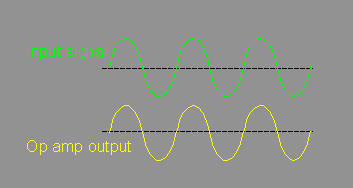 Any low voltage opamp will work, with a minimal number of parts. A dollar store car usb charger can be used to power it.

Potentially it may work and should be safe, although resistors of lower value than headphone impedance (32 ohms) could theoretically be damaging. I would try 100 ohms and 50 ohms first. Standard 1/4 watt resistors will do. Note there will be a loss in signal amplitude through the resistor. Make sure you avoid the possibility of shorting out the wires by careful construction.

Not the answer you're looking for? Browse other questions tagged iphone or ask your own question.

1
How to wire sennheiser headphones to an iphone headphone cable
4
Digital input to mobile phone headset port?
1
How can extend the cable distance from a condenser microphone to the ADC without loosing fidelity?
5
80's Cassette Line to Microphone Level for iPhone
15
Electronic aspects of iPhone 3.5mm audio output
0
Amplifying analogue audio from an iPhone docking station
2
TRRS connector with iphone circuit board, how to get mic compatible with PC input (Bose Q25)
0
Emulating the start/stop button on the remote control of the iPhone
3
Microphone voltage on a 3,5mm PC microphone/headphone jack
2
problem solving: line level to iphone attenuator buzzing sound