I checked the link to this question, but as I was attending a few lectures I was constantly told (also told by some very experienced designers/enthusiasts) that adding an emitter resistor to an NPN transistor reduces chances of saturation and shorting the emitter to the ground drives the transistor to saturation. Is this true? If this is, why is this the case?

The way I see it, 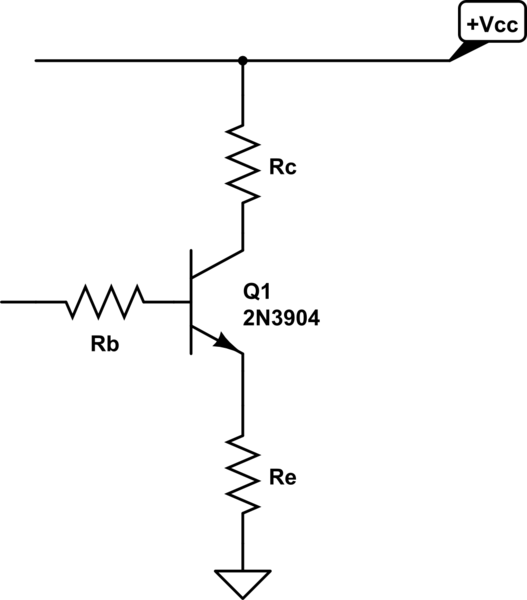 The base emitter loop gives me the equation -

Using the value of \$I_b\$ arrived at from the base equation, we get

In all this I can't figure out why having \$R_e\$ shorted or having \$R_e = 0\$ would be beneficial in any way towards getting the transistor saturated.

When you DON'T have an emitter resistor, the voltage you put on the base pretty much defines the current into the base - it's a forward biased diode so base current starts to rise rapidly above about 0.4V and by the time the base voltage is 0.6V you might be putting 10mA into the base. The transistor will be likely saturated with collector at about 0.2V above emitter.

This means the emitter resistor is stopping "foolish" levels of current entering the base and this is a type of negative feedback. It largely prevents saturation with reasonable base voltages.

The way I write it is:

But in saturation, the value of \$\beta\$ obviously isn't a constant. In fact, it's not an input to the equation. It's an output once you get an approximation using other means.

(Again, the above is a gross approximation and ignores some important, secondary effects. But it's within the ball park.)

If \$R_b >> R_e\$, as is often the case, then the denominator is about the same when you "short out" \$R_e\$. But the numerator get's much larger because a major subtraction (not infrequently close to \$\frac{1}{2}V_{cc}\$) is removed. So \$I_b\$ is typically larger by that action. With any appreciable current gain at all, this difference is multiplied substantially and the increased current much more easily overwhelms the somewhat larger drop required (roughly \$\frac{1}{2}V_{cc}\$, again) across \$R_c\$ to cause saturation.

Does that make sense?

By the way, the emitter degeneration is often used for reasons other than avoiding saturation. The value of \$r_e\$, based as it is upon \$\dfrac{k \cdot T}{q}\$, depends linearly on absolute temperature. A CE configuration without emitter degeneration has its gain similarly dependent upon temperature. Jacking up \$V_e\$ to about a volt or more above ground makes the gain (and the design itself) much less dependent upon temperature.

14
How do BJT transistors work in a saturated state?
1
Solving a transistor circuit and determine the base current
5
Voltage between collector and emitter (in transistor circuit) [2N3904]
2
BJT Transistor question help here?
1
How do you calculate the current and voltage when the emitter is grounded for saturation mode
0
Help with understanding common-emitter amplifier
1
decreasing base current on saturated npn transistor
1
Effect of emitter capacitor in common-emitter amplifier