I2C communication with AVR - how to let the lines "float"?

I am trying to implement I2C using an AVR controller without the designated internal TWI registers.

The I2C protocol requires that the Master device drives the SDA and SCL lines to begin with in order to address and begin a communication transaction. The problem I am having is that after an address is sent over the serial line, you must let the data line "float" (that is, be pulled high by the pull-up resistor) in order for the slave to drive the line low for an ACK signal.

I am able to successfully successfully address the I2C device, but when I attempt to let the line "float" I am having a bit of trouble. I was under the impression that in a input HIGH-Z state (tri-state that is - DDRX 0, PORTX 1 for a particular pin) would essentially be modeled like: 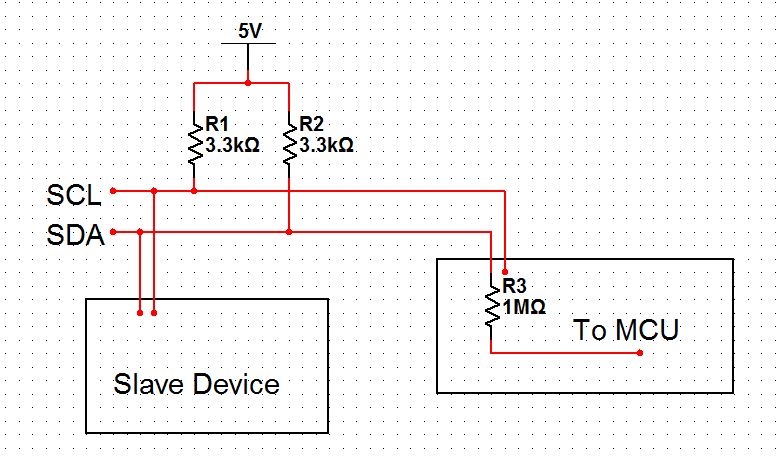 However, the state of the SDA line remains high even though the I2C device is responding with an ACK bit by driving the line low. I know this to be true because I set a sizable delay after setting the pin as input. During this delay, the line remains high. However, if I remove the wire tying the MCU to the SDA line then it will drop to LOW due to the slave device.

In short, how do you handle "letting go" of a line to ensure its potential is driven by the devices on your I2C data line rather than being influenced by the MCU?

A large delay was inserted after SDA on the MCU is set as input for testing. The line remains high. If the SDA line is removed from the MCU (wire no longer connected), the SDA line is driven low by the I2C device being addressed (device is sending ACK). Clearly I am doing something wrong here.

For set_in, you’re passing I2C_PORT, which is PORTB, but you need to pass in DDRB.

Not the answer you're looking for? Browse other questions tagged avr i2c or ask your own question.

4
bitbanging i2c problem with ACK from slave
0
I2C Communications with Arduino
2
When do you release and re-aquire control over SDA around an i2c Ack?
3
Trouble initiating I2C communication between Arduino and 3.3V Slave
0
AVR Can Write I2C, but Fails to Read (Fails to Write Register Address)
0
stm32f0 sht35 i2c communication failure
0
I2C clarification
1
How to configure the I2C of the MSP430
1
Data frame ACK bit is always high from I2C target device read