I'm having problems with documentation and what appears to be conflicting use of the word grounded. The way I understand it, a thermocouple can be [grounded, ungrounded, or unsheathed] (http://www.omega.com/techref/themointro.html). But neither of the two wires are actually connected to ground, they're still floating when they go into the thermocouple amplifier.

However, I've been reading a lot about thermocouples and they talk about grounding them by connecting the T- side to ground through a 1M resistor. This is a completely different type of grounding to me (http://www.analog.com/library/analogdialogue/archives/44-10/thermocouple.pdf)

I'm trying to use a Max31855 breakout board, and it specifically says it's not compatible with grounded thermocouples. So which grounding do they mean? I've not had either wire connected to ground (but I'm using a K-type grounded thermocouple), and occasionally a static shock when I touch it will reboot my Arduino and send out all kinds of garbage over the serial.

Grounded thermocouple. Thermocouple is deliberately connected to the sheath to improve the response time. 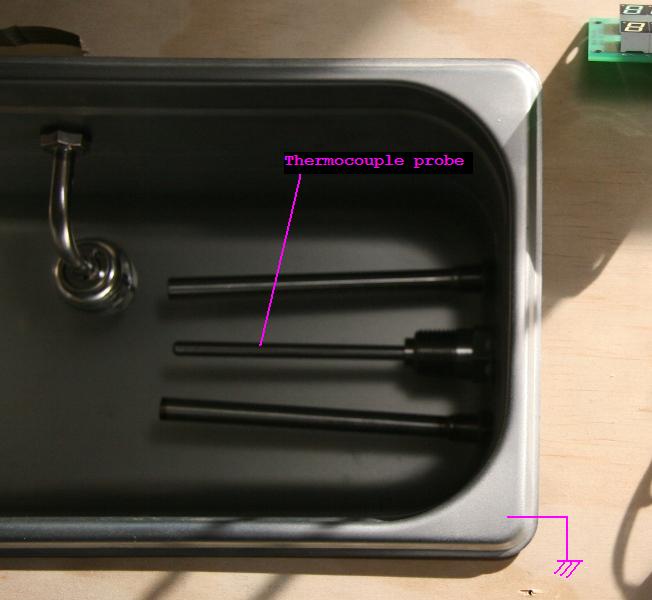 The MAX chip will not work with conventional grounded-junction thermocouples where the two wires are welded into the end of the metal tube. Typically the tube is then shoved into a hole in a block of material or immersed in a liquid with the tube connected electrically to a grounded tank through a compression fitting. This type is the fastest and most robust type of thermocouple (and also somewhat more economical and more reliable), so it is unfortunate, but it is what it is.

You may be able to use shielding on the thermocouple wires to avoid the ESD events you describe or some kind of RC filtering to ground.

Not the answer you're looking for? Browse other questions tagged ground thermocouple or ask your own question.

6
Multiplexed Thermocouple Considerations
2
MAX6675 and 50Hz noise
0
Should the thermocouple wires be insulated against a metal shaft
3
Thermocouple temperatures change drastically when my whole system is powered vs when just my arduino is powered
3
Large excursions in thermocouple readings with MAX6675
-2
What do thermocouple type names (eg K, L, B) signify?
1
Is my K-type thermocouple defective, or am I using it wrong?
1
Should this cold-junction compensated thermocouple-to-digital converter (MAX31855) output an accurate temperature?
0
What options are available for measuring grounded thermocouples?
1
Thermocouple on a grounded stainless steel box
See more linked questions

6
Serial data transfer from Omega DP80 legacy hardware to computer
4
Handling the output of an AD8495
2
Earth Ground's role in 3 prong AC systems
2
MAX6675 and 50Hz noise
1
µC (Arduino) and Dealing with thermocouple noise
0
What options are available for measuring grounded thermocouples?
1
How to Amplify Thermocouples (and DC sensors between 1mV and 1µV DC)?
0
Splitting/y'ing a thermocouple amongst 2+ inputs
0
Cold-junction point