I'm trying to build a UV LED exposure box to aid in the PCB etching process. There are plenty of guides around, but they all seem to involve haphazardly throwing LED's onto some perf-board with little thought of hotspots/LED coverage. Sure, enough LED's on one board are certain to guarantee adequate UV exposure, but I'd like to put a little thought into precision/accuracy.

However, I've long since forgotten the necessary math skills to do this... I imagine the best arrangement would be a series of equilateral triangles of LED's. The LED's should be spaced so that given some fixed distance (z) away from the LED's and given some variable coordinate (x,y), the brightness remains consistent. It's probably impossible to have exactly the same brightness at all points, but I find this problem interesting and worth the effort.

Some specs to work from: the LED's I have in mind are 5mm flat tip, clear UV LED's with a viewable angle of 140 and intensity of 1200 mcd.

The way I understand it, half of the viewable angle is the angle at which the LED's intensity is half of the intensity at the center. I can't seem to find any good technical documentation on how intensity varies from the edge of the viewing angle to the center, and I'd greatly appreciate any pointers on that. I'm hoping it's somewhat linear, but am very doubtful.

Anyways, any thoughts on this or links would be greatly appreciated. Thanks!

I think what you are interested in is what this BIVAR datasheet calls: Relative Luminous Intensity vs. Radiation Angle 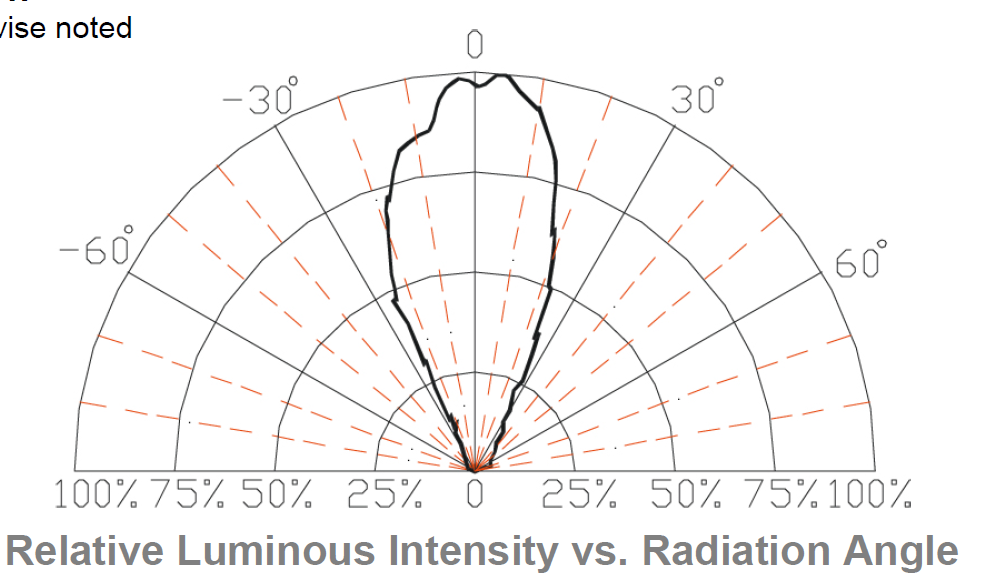 I think it is hard to keep the relative luminous intensity exactly constant along all points in x and y at the fixed Z of the board as I suspect this may not only be affected by the incoming luminous intensity but could also depend on how the different materials/components on the PCB react (some may be reflective/cast shadows/different heights).

You might want to consider some sort of lens (such as this spherolit lens) which changes the dispersion properties.

In short, I think if you can:

Then you will be going along the right lines.

Perhaps if you had some measurement/test equipment (such as a voltage outputting UV sensor) so that you can experiment with different UV LED arrangements and measure the UV intensities using a grid of fixed points on that Z plane this will help evolve/refine your design.

Here is a link to the page containing the BIVAR datasheet with information in it: http://uk.rs-online.com/web/p/visible-leds/7134888/

Not the answer you're looking for? Browse other questions tagged led pcb-design or ask your own question.