I was wondering... I have read about ideal op amp, that we could change this circuit :

Into this one (with the ideal model), where the input resistance Ri is infinite, and the output resistance negligible (so Ro = 0 Ohm) :

But what happens if we have that? 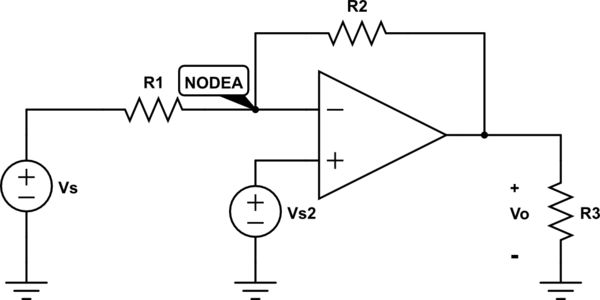 Will the voltage at A still be zero? Does it changes absolutely nothing to have Vs2 there? I'm confused on this one. I've seen only problems with the + gate of the op amp at ground.

Will the voltage at A still be zero? Does it changes absolutely nothing to have Vs2 there?

To find the answer, write an equation for the node voltage \$v_A\$ using superposition. For simplicity, assume the input resistance \$R_I\$ is infinite.

Try this. Think of the op-amp as a control system: - 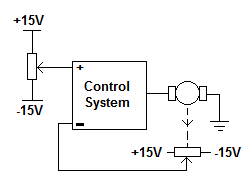 You set the demand with one pot (on the left) and the motor rotates until the other pot reaches a position where the voltage it produces equals the demand voltage.

0
Ideal inductor in series with a resistor:
0
Input/Output Current from OP amp
0
Op-amp and ideal diode problem: determine Vout as a function of Vin
4
Ideal Op Amp and its Input Voltage
0
Gain of an Operational Amplifier
1
Ideal Voltage/Current Sources in the Theoretical Total Resistance of a Circuit
1
Frequency response of a non-ideal op-amp integrator (input bias current considered)
2
Input Bias Current in an OP-AMP and its value in a datasheet
1
Determining Output Resistance of Transresistance Amplifier
1
Eliminating ideal voltage source for node analysis