Choosing resistor values for inverting amplifier and why?

The gain here is A = -Rf/Rin. However, lets say I want a gain of 10 V/V. Which resistor value would you choose and why?

I know that you could have infinite number of combinations for these resistors but why would some one use specific value. i.e Rf = 100Mohm, Rin = 10Mohm gives a gain of 10V/V but also Rf = 10 ohm and Rin = 1 ohm gives the gain of 10V/V. What difference would it make to the design?

My thoughts say that higher value resistors are not precise so it wouldn't give you precise gain and using lower value resistors sink higher current from the source (Vin). Are there any other reasons? Also, let me know If I am right or wrong as well.

There are downfalls with choosing very large resistors and very small resistors. These usually deal with the non-ideal behavior of components (namely Op-Amps), or other design requirements such as power and heat.

Small resistors means that you need a much higher current to provide the appropriate voltage drops for the Op-amp to work. Most op amps are able to provide 10's of mA's (see Op-amp datasheet for exact details). Even if the op-amp can provide many amps, there will be a lot of heat generated in the resistors, which may be problematic.

On the other hand large resistors run into two problems dealing with non-ideal behavior of the Op-Amp input terminals. Namely, the assumption is made that an ideal op-amp has infinite input impedance. Physics doesn't like infinities, and in reality there is some finite current flowing into the input terminals. It could be kind of large (few micro amps), or small (few picoamps), but it's not 0. This is called the Op-amps input bias current.

The problem is compounded because there are two input terminals, and there's nothing forcing these to have exactly the same input bias current. The difference is known as input offset current, and this is typically quite small compared to the input bias current. However, it will become problematic with very large resistance in a more annoying way than input bias currents (explained below). 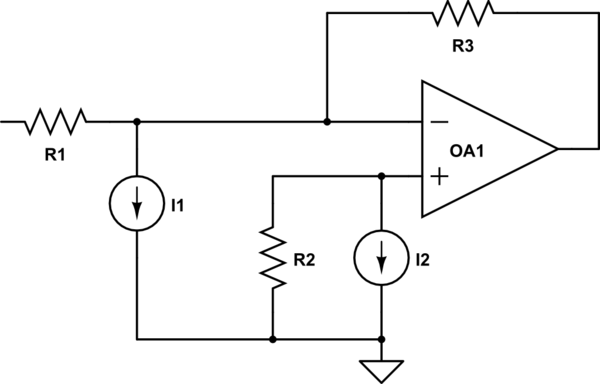 Notice that there is an additional resistor R2. In your case, R2 is very small (approaching zero), so a small resistance times a small bias current I2 is a very small voltage across R2.

However, notice that if R1 and R3 are very large, the current flowing into the inverting input is very small, on the same order as (or worse, smaller than) I1. This will throw off the gain your circuit will provide (I'll leave the mathematical derivation as an exercise to the reader :D)

All's not lost just because there's a large bias current though! Look what happens if you make R2 equal to R1||R3 (parallel combination): if I1 and I2 are very close to each other (low input offset current), you can negate out the effect of input bias current! However, this doesn't solve the issue with input offset current, and there are even more issues with how to handle drift.

There's not really a good way to counteract input offset current. You could measure individual parts, but parts drift with time. You're probably better off using a better part to begin with, and/or smaller resistors.

In summary: pick values in the middle-ish range. What this means is somewhat vague, you'll need to actually start picking parts, looking at datasheets, and deciding what is "good enough" for you. 10's of kohms might be a good starting place, but this is by no means universal. And there probably won't be 1 ideal value to pick usually. More than likely there will be a range of values which will all provide acceptable results. Then you'll have to decide which values to use based off of other parameters (for example, if you're using another value already, that might be a good choice so you can order in bulk and make it cheaper).

In your specific op-amp circuit, the voltage on junction of Rf and Rin is the same as the voltage on the non-inverting input. This has to be so - it's called a virtual earth. Given that fact, this means that your signal (Vin) sees an input impedance of exactly Rin. It also means that your output (without connecting to anything else) has to drive an output load that is Rf.

These two facts usually dictate that Rf and Rin are not very small i.e. they are 50 ohms or upwards.

The op-amp has other things about it that means you need to avoid the high end resistor values. These are: -

I think that's enough for now!

First, your diagram is an inverting amplifier, not a non-inverting as in the heading for your question.

There are some common resistors that make good ratios for gain and better yet, common precision resistors with low temperature coefficient and nice resistance ratios. I like to use the precision parts if at all possible. (Same is true for caps in op-amps like for integrators - polystyrene precision and temperature stable). Like 10K/1K or 33K/3.3K. Beyond 100K/10K the Resistance gets high enough that the small capacitance in the circuit starts to turn your circuit into an integrator or differentiator (or low pass filter).

Very low Rin values load the input and high Rf values increase output impedance. These problems are easily overcome. Most op-amp packages have more than one OA. Use one as a voltage follower and as the input to your OA that has gain. Your total circuit presents a very high input impedance and your OA with gain sees a very low impedance on its input and you can use low values for Rin. You can also use an OA follower on the output to have high drive current and low impedance output. You can even easily configure the output to match impedance of the next circuit or a coaxial cable, etc. I like to use high precision low tempco resistors or low tempco pots (or digital pots) for Rf and trim for gain.

I have used 1M/1K for a gain of 1000 (2 op-amps in a row gives gain of 1 million) with low-pass for seismology, but this is a few Hz bandwidth and works even with the lowly uA741. LM308 requires much less trim. Good modern OA's are great by comparison. If you get into the 10M to 100M area for Rf, your bandwidth will drop off and noise will go up.

The claim that "higher value resistors are not precise so it wouldn't give you precise gain" is usually not quite true in itself (but is true by proxy for other reasons, as I will discuss below).

However, very large resistors do reduce precision because of other reasons. Two that have already been mentioned in other answers are (i) the effect of bias and offset currents; (ii) Johnson noise.

Another reason which hasn't been mentioned is that very large resistors start to be become comparable to the resistance of the environment (e.g. the PCB), especially in the presence of humidity and/or salinity. This does make them imprecise, because they are now seen by the circuit in parallel with whatever is surrounding them.

The bottom line is, try to avoid resistances larger than 1MOhm if possible, and really try to avoid anything over 10MOhm. On the other end of the spectrum, around 1k is usually the lower limit.

Not the answer you're looking for? Browse other questions tagged operational-amplifier current-source gain feedback stability or ask your own question.

8
Is there any advantage or disadvantage of using high value capacitor instead of high value resistor in filter?
5
How do you determine the input impedance for an inverting amplifier?
1
What determines absolute value of resistors used in opamp circuits?
2
OpAmp feedback resistor query
1
Does the resistor values used for opamp circuits come from the equations?
-2
Thermocouple with Difference amplifier

1
Advice for my Voltage controlled Amplifier
1
Choosing resistor values for Op-amp and inverting/non-inverting configuration
28
What is noise gain, really? And how is it determined in the general case?
0
Experimentally measuring the gain of an amplifier with noise
2
op amp current source oscillating
4
JFET stabilised wien bridge component ratios
1
Help selecting feedback and ground resistors for a gain and offset circuit
1
Current sense op-amp with integrated shunt vs expensive resistor
1
Beginner nodal analysis exercise: Why would the voltage of the output of the op amp swing from 15V and 0V when op amp is in the follower configuration
10
Considerations in resistor sizing for op-amp circuits?