Why there are no circular LCDs?

There are some potential uses for round LCDs, for example smart watches. Searching reveals couple news from while ago but I haven't seen any in real use. What is the main reason why these non rectangular displays are not common?

It is very difficult to cut round shapes out of glass or produce concave corners. Straight cuts which go all the way across a reasonably-thin sheet of non-tempered glass can be made quickly and reliably by scoring a line and trying to flex the glass there. It's not necessary to score very deep, nor very thoroughly--all that's necessary is to ensure that the scored part breaks before anything else, and the failure of the scored part will tend to cause the entire sheet to fail on that line. Making a curve is much more difficult. If one scores a curve in glass and tries to break it along the curve, the fracture will start somewhere on the score, and depending upon the curvature and depth of the score, the crack may follow the score for some distance, but the scoring must be very deep to have much useful effect, and even when the scoring is deep the crack will still often diverging from it. If one is trying to form an outside curve, one may with some effort be able to to snap off the places where the glass fails to break cleanly on the score, but the amount of work required will be much greater than for a straight break, and the results will be much rougher. Someone who's hand-making stained or fused glass as a hobby project might not mind the amount of labor required to cut curved pieces, or mind the fact that sometimes breaks won't be confined to the parts of the glass one is trying to remove (if one does large pieces first, one may be able to use broken "large pieces" as source material for smaller ones). Such issues, however, would render score-and-cut an ineffective method for mass production.

The only way to effectively mass-produce round displays would be to saw them or machine them. That's much slower than the score-and-cut process used for rectangular displays. It's certainly possible to mass-produce cut glass circles, but doing it with LCDs (where the cut circles would have to line up with the printed patterns on the LCDs) would be harder than doing it with featureless sheets of glass.

Producing octagon-shaped LCDs would probably not be overly expensive compared with square ones--start by scoring a square grid, then add a score to each corner; the leverage available to snap off the corners would make it fairly easy. A 16-sided shape might be possible (start by forming an octagon, then snap off a little bit off each of the 8 corners, but much less leverage would be available on the corners, making it harder to snap them cleanly. Unless the product's physical dimensions would absolutely require the use of a round display, going with a rectangular display would be cheapest, and I would expect an octagonal display would probably be second-cheapest. Its ratio of maximum radius to minimum radius wouldn't be as good as a circle (whose ratio would be 1:1 of course) but at about 1.088 it would be much better than that of a square (whose ratio would be 1.414).

I asked an LCD maker or two about this. It's possible, if you have the money to spend.

I note that the Nest thermostat (where they did have plenty of money to spend) appears to be a masked square LCD with a bezel and crystal that give the illusion of a round LCD display. 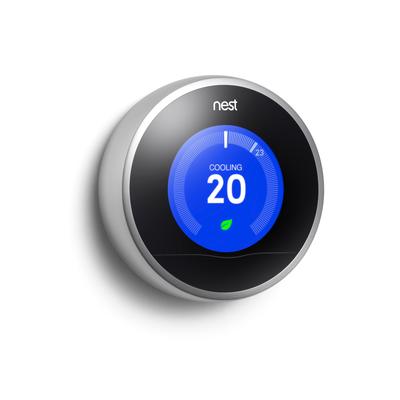 I think it's market demand. The existing tooling and processes are set up for rectangular displays because the vast majority of market demand is for these types of products. There's a huge investment in changing the tooling an processing so for a relatively small demand it doesn't happen. It's a little more difficult to produce a circular display because of cutting, material waste, connections, etc, but if there were a huge market demand (and the market was willing to pay the premium for the extra difficulty) you can bet they would be making them.

There are lots of these available from Japan Display, that is the source of supply for the pebble watch/wearable. 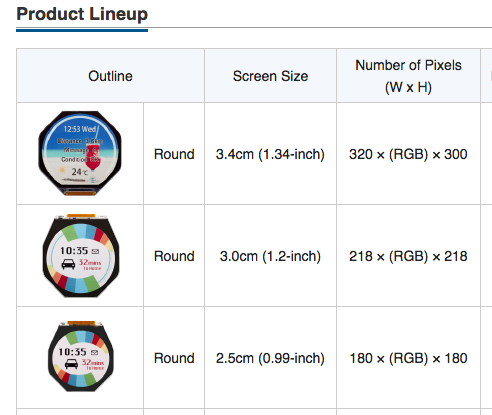 As you can see in some places the Glass is octagonal, but the 3.0 cm diameter outline is a distorted octagon.

I would say, it's purely an issue of demand (after all, manufacturers can pass costs to clients and the costs are not that expensive with appropriately chosen technology).

If you can settle for OLED instead of LCD you will have plenty of options like this one: http://www.alibaba.com/product-detail/1-13inch-Round-OLED_621657930.html

If one thinks about how information is displayed, one comes to the conclusion that there are very few ways information can be meaningfully displayed in circular format. Sounds so pompus stated that way.

But... pixels are just the smallest controllable element in a display. How they are arranged is up to the graphic artist laying out the display. A moving dot can be laid out in a straight line or a curved line. The farther from the beginning spot the dot moves shows how strong or weak what ever is being measured value is.

Another thing is that data is stored in data arrays and is easier for the engineer to keep it straight in his/her mind if it is linear in nature.

Finally, lines look horrible when made up of pixels as they are never quite in alignment except at 45 or 90 degree angles. All that being said even TV is rectilinear in nature.

This question has always held my attention in SciFi movies. The one thing I love is the color in the displays but it is a bad idea to rely on color as in green for go red for no-go because somewhere, sometime a dadblasted color blind person will stand watch and misread the indicators. Oh yeah, they sure will. One may thumb one's nose at the Universe thinking one has idiot proofed ones work and the Universe will smile back and make bigger idiots.

1
Daytime viewable LCDs
6
How are dot matrix LCDs controlled?
0
How to work with Dot Matrix LCDs?
14
Why are LCD panels polarized at 45 degrees?
2
Controller that supports multiple LCDs, ideally up to 5
18
Do graphical/pixel mapped LCDs need a screensaver?
5
Why not use monochrome LCDs instead of E-ink?
0
ARM M4 based Microcontroller or Particle Photon drive multiple small colour lcds?