Is a N-Channel Mosfet save/reliable for level shifting UART from 3V3 to 5V?

I am busy with a design that needs to connect a Raspberry Pi to an Arduino via UART. Previously I have designed a circuit that worked okay. 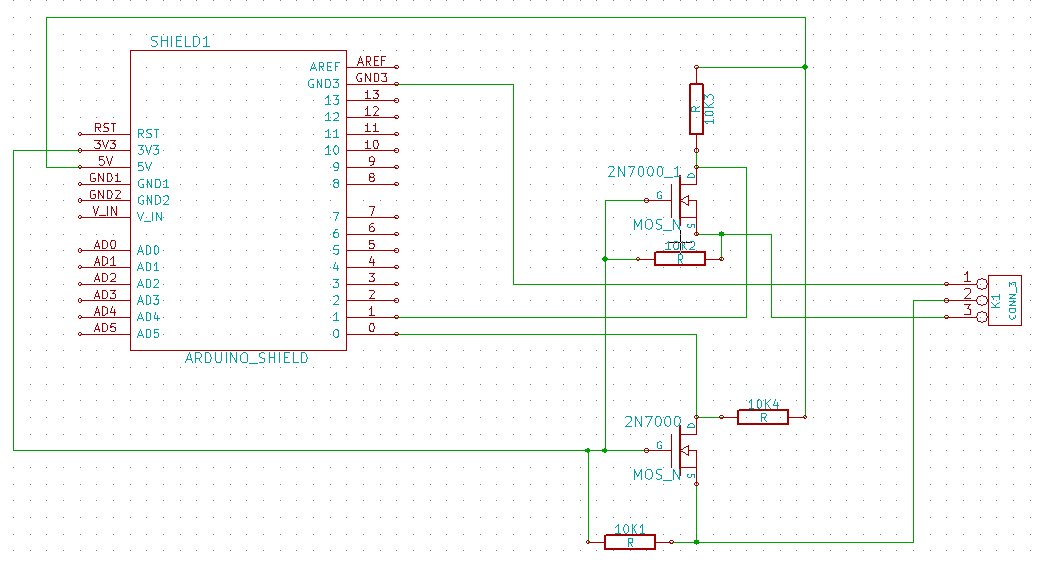 But now I want start using SMD components and is planing on using the following component: BSS138BKS + 10k Resistor Bank.

I am not an expert at these things and I am usually use designs from other circuits in my new designs.

My question is, will the BSS138BKS used like in the original setup with the 2N7000 be able to run continuously without issues.

And is this the right way to do level shifting between the two devices? (I don't want to damaging the boards).

The BSS138 should work just fine in your level shifter circuit. Just make sure to connect it's G, D, and S pins up in the same method that you used for the other FET. For a level shifter like this it is essential that the D (drain) pin be connected to the side that has the 5V levels so that the body diode in the FET does not go into continuous forward BIAS.

When you build it up with the BSS138 parts you may want to check the rise time of the signals passing through the level translator. If they are too slow for the baud rate you intend to use you may need to lower the value of the pullup resistors on one or both sides of the translator FETs.

Do both UARΤ connections refer to direct connections to the mcu pins? If any of the two boards is using a UART driver (MAX232 or similar) then you are going to have troubles caused by the bipolar voltages (about +8/-8v).

I haven't seen a level translator like this used for UART connection, not that it's not possible but usually there are faster alternatives like SPI or I2C (TWI) that can be used for short distances. If you are using UART in order to be able to transfer the signal to a long distance then I don't think it's going to work, you'll need to use dedicated UART drivers.

Note that for a unidirectional level translator there is another option, using a diode and a pull-up resistor (when there in not an internal pull-up that can be used). 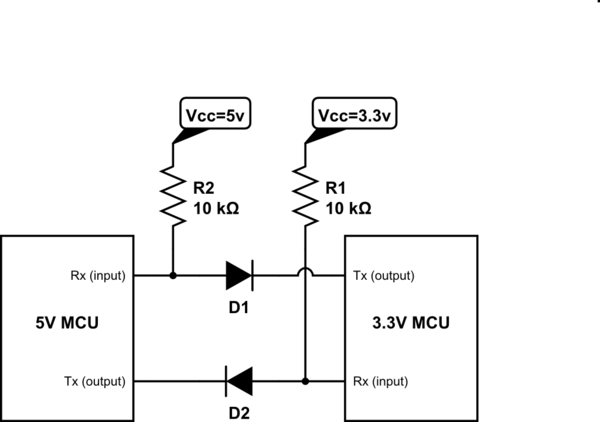 In both cases the voltages are in the proper range to be translated as logic High and logic Low from the mcu inputs.

Not the answer you're looking for? Browse other questions tagged arduino transistors uart raspberry-pi level-shifting or ask your own question.

5
Is a 40109 fit for 3V3 <=> 5V level shifting?
0
Transistor Ohms
0
Replace an inverter and a MOSFET with an IC for 3v3 to 5v level shifting?
0
What transistor setup to use for level shifting to create a logic ENABLE signal (for DC-DC converter module)
0
Using a Non-Inverting Buffer for Level Shifting
1
Level Shifting a MOSFET
1
Making a Darlington transistor (eg: TIP120) with D882 to drive 12V LEDs with 3.3V or 5V input RPi
0
USB-UART Converter Design based on CH340G not responsive