My purpose is to build a cheap quick-and-dirty "robot" using 2 electrical screwdrivers connected to the wheels and a smartphone to control them. I want to control each motor (forward/idle/reverse) using two phototransistors/photodiodes/photoresistor facing the smartphone screen.

My idea is to use the battery (3.6V) and motor of this electrical screwdriver http://www.ikea.com/us/en/catalog/products/60196103/ and somehow connect it to a smartphone screen to move it forward or backward or switch it off. The smartphone would show two squares on the screen each of them can be black or white. The phototransistors would be placed on the screen, detect the color and switch the motor (using other transistors or relays). For example if both squares are white the motor would go forward, if both are black backwards and if one is white and the other black the motor would be idle (without short-circuiting the battery).

I am not an electronics expert and I don't know what is a good detector for the light coming from a smartphone screen (infrared detectors won't work). I assume that the detector should be touching the screen and isolated from exterior light. I don't know which is a good switch for this kind of motor (3.6V), either a transistor or a relay.

I would like the solution to be simple and cheap, using the 3.6V battery of the motor. I want the motors to be either on or off depending on a light threshold (no linear response depending on the light).

UPDATE: This is the motor 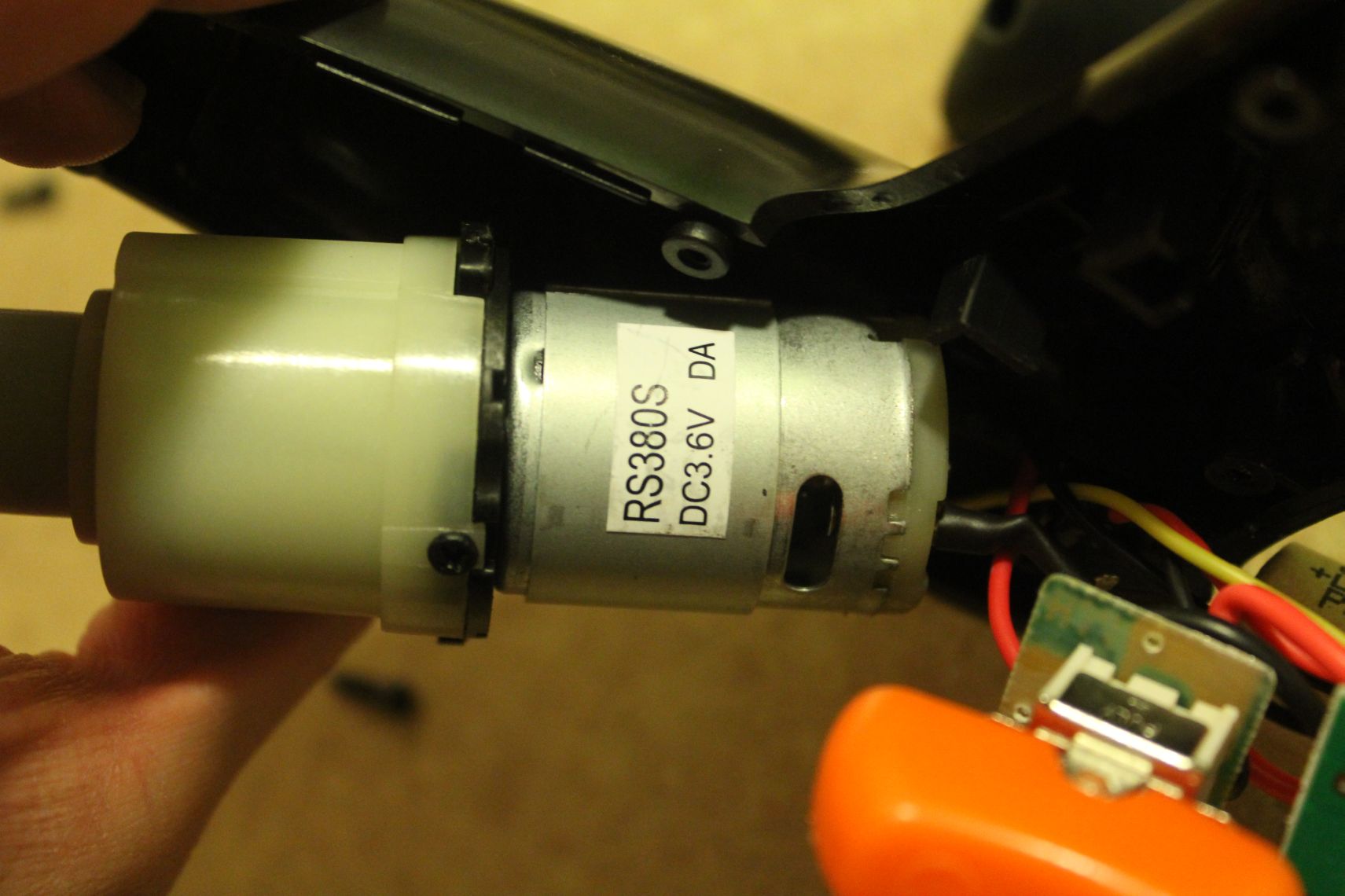 When running without load (only the gears) the current I measured is 1.84A, but when it starts is higher (I think I saw more than 3A).

I found this specs that may be from the same motor: http://www.mabuchi-motor.co.jp/cgi-bin/catalog/e_catalog.cgi?CAT_ID=rs_380sh the name is nearly the same (there's an extra H) and the dimensions are the same.

I think that your project can be done very easily. 1)because you don't have an electronic background, I will tell you to ignore the comments about noise being injected into the battery. 2) you are right about the screwdriver motor. It does give you more torque...considering that we don't know anything about your load, you might need it. 3) Those screwdrivers usually have a rechargeable battery and wall charger. If you have the one that came with the screwdriver, really ignore the noise comment. 4) Do you know what a relay is? From digikey.com you buy a relay for your project. I will suggest that you buy a relay that can handle at least 5volts at 5A max. 5) your motor will be connected to your relay. You will activate the relay with the output of a color sensor. There many color sensors out there. I do believe that there is a color sensor that gives you a 5v output when a black black line is detected. Check parallax.com or sparkfun or robotshop.com. 6) To recap, when the sensor sees black on the screen, the output will go high, hence activating your relay, which will turn on your motor. Good luck !

Not the answer you're looking for? Browse other questions tagged dc-motor touchscreen phototransistor photodiode or ask your own question.

4
Is it possible to control and reverse the direction of a dc motor through a headphone socket?
4
Homebrewed phototransistors - unijunction versions
3
Difficulty getting motor to reverse
1
Using photodiode to measure onset of screen refresh
2
Simple, cheap and robust light gate for use in schools
0
How to physically stimulate a touch screen with an external device
4
Which color puts the least "strain" on an LCD pixel to avoid burn-in/ghosting?
3
Very low current (<10 microamps) darkness detector circuit that turns off in light
1
Solar Panel-Photocell Wiring