I want to implement a alert system using a comparator circuit. The circuit will alert the user when he is a certain distance away from an object of interest. The comparator circuit will comprise of an op-amp powered with only a +5V voltage supply. There will be a Infra-Red sensor to sense the distance. The idea is to turn on a vibration motor only when the user is 2 cm or closer to an object. The output voltage of the IR sensor is proportional to the distance of the object it is sensing. This output can, thus, simply be compared against a voltage of interest to produce an output voltage. 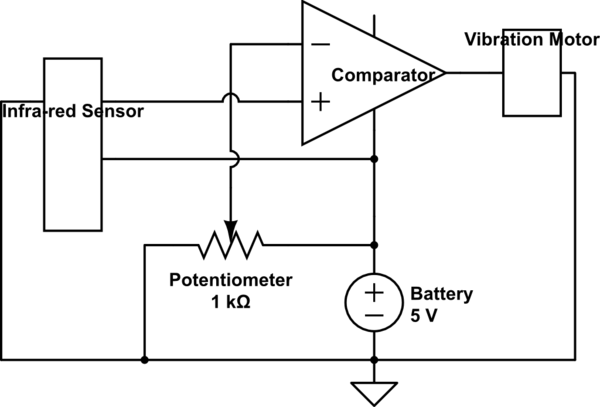 As shown in the circuit above, a 5 V voltage supply will be used to power the IR sensor, vibration motor, and the operational amplifier. The voltage output of the IR sensor is proportional to the distance to the object it is sensing, and varies from 2.65 V to 0.4 V as the distance changes from 2 cm to 28 cm. This voltage is fed to the non-inverting output of the op-amp. The inverting output is connected to one terminal of the potentiometer. The knob of the potentiometer can be adjusted such that the input to the inverting input varies from 2.65 V to 0.4 V. If, suppose, the input to the inverting input is held at 2.65 V, then the output from the op-amp is 5 V (the positive voltage rail) only for distances the IR sensor detects to be less than 2 cm. If the distance is more than 2 cm, the input voltage at the non-inverting output will be less than 2.65 V, which means it will be lower than the 2.65 V voltage at the inverting output. This would normally force the output to saturate at the negative power supply voltage, which is simply not present for our circuit. This means the vibration motor will turn off for distances more than 2 cm.

My question is whether the idea of using a single voltage source, and estimates of power correct?

In order to bring order out of chaos, I enjoy looking at older questions and helping them to completion. This question, along with the good contributions from the above commentors can be moved forward to help others :

Using the IR sensor as described, I have merely modified the OP's circuit so that the stated function can be implemented.

As stated by comments above, low power op-amp needs a transistor to be able to drive the "vibration motor". Transistor Q1 has been added. Use any transistor that has V-gate threshold less than 4 volts, along with minimum Id of 100mA.

LM393 output is open collector, thus the addition of R1.

R2 was added to put some hysteresis into the circuit, so that the op-amp output doesn't oscillate (bang bang, go hi then low) when sensor signal is close to the setpoint.

Setpoint is achieved by the potentiometer.

The circuit proposed is not supposed to be an exact solution, but one that will give a starter point for others. 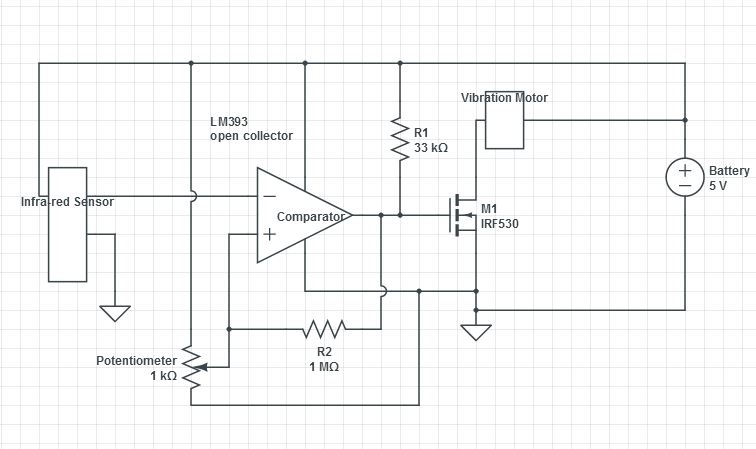 Not the answer you're looking for? Browse other questions tagged power sensor operational-amplifier infrared vibration or ask your own question.