I would like to mount a TSAL6400 led on a single AA size battery box, with a simple ON/OFF switch. My problem is that the LED needs exactly 1.35V to function at its rated brightness. At this voltage it uses 100 mA current.

I would like to use Sanyo Eneloop batteries. I've measured them and they have 1.405V one day after charging. I think they will drop to about 1.395V @ 100mA.

I've followed the LED tutorials, which all say I have to wire a resistor in serial with the LED. My problem is that if I calculate, that resistor needs to have (1.4-1.35)/0.1 = 0.5 Ohm resistance.

My question is that what would you recommend me to do this project? I would like to make the box as little as possible, I'm planning on mounting everything directly on a single AA box.

UPDATE: I've made some measurements on my LED:

The last one is when I connected it directly to a Eneloop AA battery. By definition it's overdriving, but I don't know how dangerous it is for the LED. 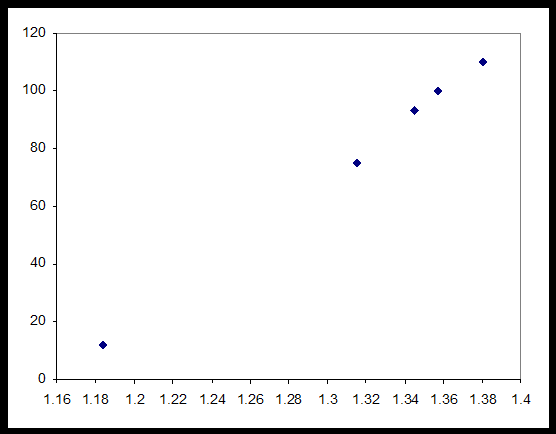 By coincidence I was looking for a bycycle dynamo operated LED lamp. White LEDs require about 3.6V, but because the supply varies from the speed you cycle (6V max, AC) I had to put a bunch of electronics in there for it anyway. Furthermore I wished high effiency, I don't want to be cycling for a resistor converting my power into heat.. So I started looking.

Also note that if you get a 1.4V battery, if you drain it, the voltage will slowly drop to about 1V. At 0.8V it's completely dead. You may want to consider to have a working product at 1.2V or 1.1V for example, also if you want to support rechargeable batteries.

For that you really need a DC/DC converter to boost a voltage up. The LT1932 is probably even more suitable for your purpose. It converts a low voltage to a constant current (which you need for a LED). It's a bit expensive (because 1) it's linear technologies, 2) you're trying to do something low-voltage), but it is able to drive a single LED from 1V. It also has a SHDN pin so you can control it:

It can drive several white LEDs (they require over 3V drop each) from 2V input. This figure shows 4 white LEDs, so that's why it needs 2.7V minimal. I don't know how it will behave if you put only 1 LED in there, but I think it will work just fine.

All you need for this driver is shown there. Rset sets the current through the LEDs(in the datasheet is probably a table). It drives the LEDs in this example with 15mA. And as said, LEDs are controlled by current not by voltage. The resistor you normally use only sets a 'fixed' current (for a certain voltage you apply on the system). This regulator is set to a certain current with the resistor Rset, and then you're done. If you put another LED in series, it will adjust the voltage so the current stays the same. Ofcourse, this has limits, but you won't reach that I suppose.

There are more of these IC's and are quite handy. You probably find more examples that are cheaper, but might not be able to work from 1V.

Use a switching boost converter to, say, 3V. The output will be regulated, so you will be able to get a stable 100 mA through the LED with a suitable resistor, and the battery will last much longer than if you connected it directly to the LED and resistor.

The simplest circuit you want is commonly called a "Joule thief", which consists of a resitor, NPN transitor, and a hand-wound inductor. Such a circuit will allow you to pull useful current out of a single AA, AAA, etc battery even when the voltage is far below the LED's threshold voltage. Not sure this will generate a full 100mA though-- this will depend on the inductor and resistor values.

LEDs need current, not voltage. When an LED is conducting it imposes a certain voltage at its terminals but the current that flows through is conditioned by a "conditioning circuit" (which can be a simple resistor in series). You are right, you need 0.5Ohm resistance (which, just like you said, you can get with two 1Ohm resistors in parallel) but once is a very small value it probably will work well without it.

If you want to turn led ON/OFF maybe the use of a transistor should be a better option. The transistor works as a LED drive.

As Leon Heller says, you will need to boost the voltage to something higher. The 1.35V forward voltage you mention is not an accurate reflection of the voltage you will get with 100mA forward current, but a statistical average.

If you are only building one of these, you might well get a fairly 'average' LED and get a reasonable brightness - but you can't guarantee it.

You don't always have to have a resistor. They are there to limit the amount of current going through the LED. LEDs have a maximum current rating, and can also handle a higher current if you PWM them for short periods of time. Anyhow, if your battery has a limited output current, you don't even need the resistor. For example, with LED throwies, you typically use a coin cell. I can't remember the exact amount, but I think they max out at 20mA, which is well within the rating of most LEDs.

The 1.35V indicates to me that it is an infrared or IR LED. Instead of a voltage regulated circuit and a resistor, you should use a current regulated circuit. In its simplest form this is a chip with a few components such as an inductor, resistors and capacitors. One maker of these is Maxim.

Not the answer you're looking for? Browse other questions tagged led resistors voltage-regulator potentiometer or ask your own question.

5
Will these LEDs work for throwies?

2
how to drive 5x5 IR LEDs with 100 mA, using Arduino
18
accounting for LED resistance
0
How to drive an LED with an LED driver
14
LED forward voltage is a range, so how do you calculate resistor value?
0
How to increase (optical) power of arduino circuit with LED? Increasing current with fixed voltage
0
3.6V Circuit and 2.8V LED
1
How to power a white LED from batteries
1
Leds in series with buzzer without resistor
0
Proper resistor(s) for limiting LED brightness