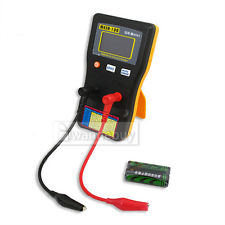 It claims to be able to test capacitor ESR with the caps left in-circuit. It appears to work well from my tests so far. However, how much can I trust the in-circuit readings? Are they going to be less accurate? Are there certain circuit configurations where it wouldn't be possible to measure ESR in-circuit accurately?

[EDIT: Added the model as requested] :

It's quite useful for repair purposes. The voltages are low enough that semiconductors don't come into play. When there are parallel e-caps, you should be comparing a total ESR of the parallel combination, but you're really looking for gross differences not even the last 2:1. The typical situation is an older piece of electronics where the electrolyte dries out, causing the capacitance to change a bit, but mostly the ESR to increase, so you get mains ripple or SMPS ripple, which eventually causes the thing to stop working adequately. E-caps do eventually wear out, and replacing them can often restore an older item. Especially the caps in the power supply- because they usually have less margin and because they tend to be in a hotter area and have more self-heating (due to ripple current and ESR-- so the higher ESR gets, the more self-heating occurs).

The other factor affecting usability is that a lot of recent electronics uses low-Z caps, so what's excellent for a standard e-cap is a bulging mess on a low-Z cap. You may have to look up the part number or guess from the schematic or circuit configuration (something like 1000uF/6.3V on a motherboard is just about guaranteed to be low-Z).

I wish I had one of those, there's a few times it would come in handy, but I don't do enough repair work to justify it. Usually I just tack a known-good cap across the suspect one and see if it makes a difference!

You can't rely on readings when the capacitor-under-test is in circuit because other components (such as other similarly sized capacitors) may be in parallel. I'm talking about power rail circuits because they are a common usage for large electrolytics where you might be particularly relying on ESR being low.

In places other than power rails, electrolytics are of course used but, is the ESR that important in these places? I'm thinking time delay circuits like 555s.

I have used a relatively cheap Atlas ESR meter to test capacitors in a faulty Jamo E7 Subwoofer.

The meter accurately identified the faulty 10uf capacitor in circuit.

I am happy to report that the sub is still working, 6 months after the cap replacement. (I was expecting the repair to be short lived.)

It depends on the design (excitation voltage) and the dut surrounding circuitry. If the excitation voltage is low, it may not turn on a transistor or diode, sand there isn't other resistors or inductors around, it can be fairly accurate.

Not the answer you're looking for? Browse other questions tagged esr test-equipment or ask your own question.

0
Is there a reliable way to read an in-circuit capacitor?