I got an old CRT oscilloscope someone had laying around unused in his garage (an ATAIO AI 751A which seems pretty obscure, not getting any meaningful Google results). Unfortunately the user manual is missing, I couldn't find it online and this is the first CRT oscilloscope I work with, so I'm not sure if I'm operating it properly.

It powers up but there's nothing on the display when the probe is not touching anything, even when it is set to GND. Touching the probe's tip triggers a (very flickery) 50Hz ~10mV peak to peak signal (yes, I'm european) but setting it to GND to center the signal vertically stops showing the signal. At dual display mode both channels are shown when I touch the tip in channel 1 (channel 2 disconnected is shown at ground level), but as soon as I release the finger, both channels are gone too.

Touching a 9V battery gets a single sweep when the tip touches or releases the battery, while I'd expect at least that channel to be shown at a constant value.

Setting a high period for the time division and touching the tip triggers a single sweep, but as soon as it reaches the far right it stops. I can trigger another sweep touching or releasing the tip again.

I pressed a switch labelled "Auto Level" which I think should make the trigger level automatic based on the last samples (which seems plausible since the trigger controls don't do anything when auto is on) but still nothing is shown on the display when touching a 9V battery.

Fiddling with the controls (e.g. pressing the "Auto Level" switch) triggers a single sweep too.

Is the oscilloscope broken or am I doing something wrong? Where should I start troubleshooting? 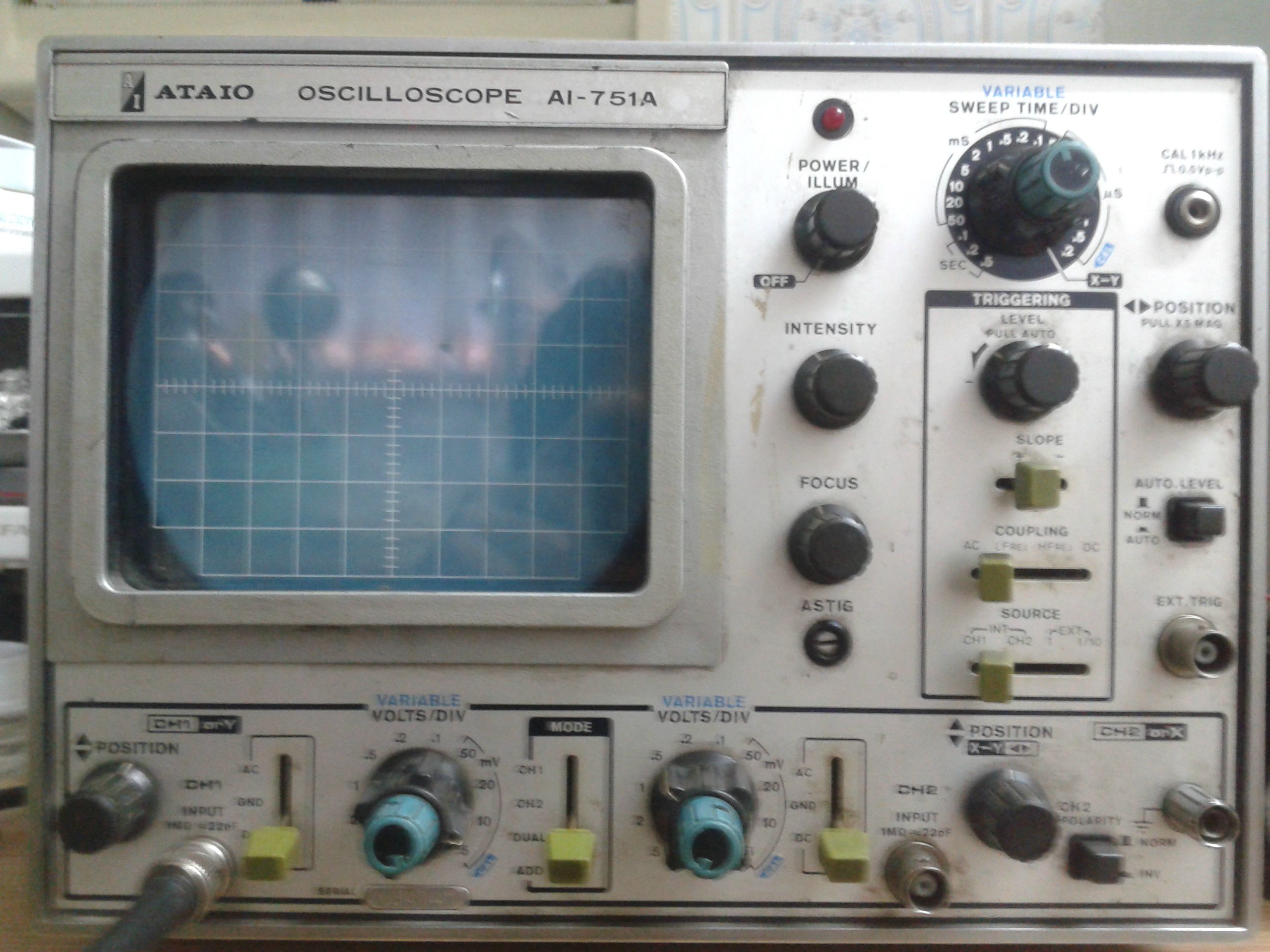 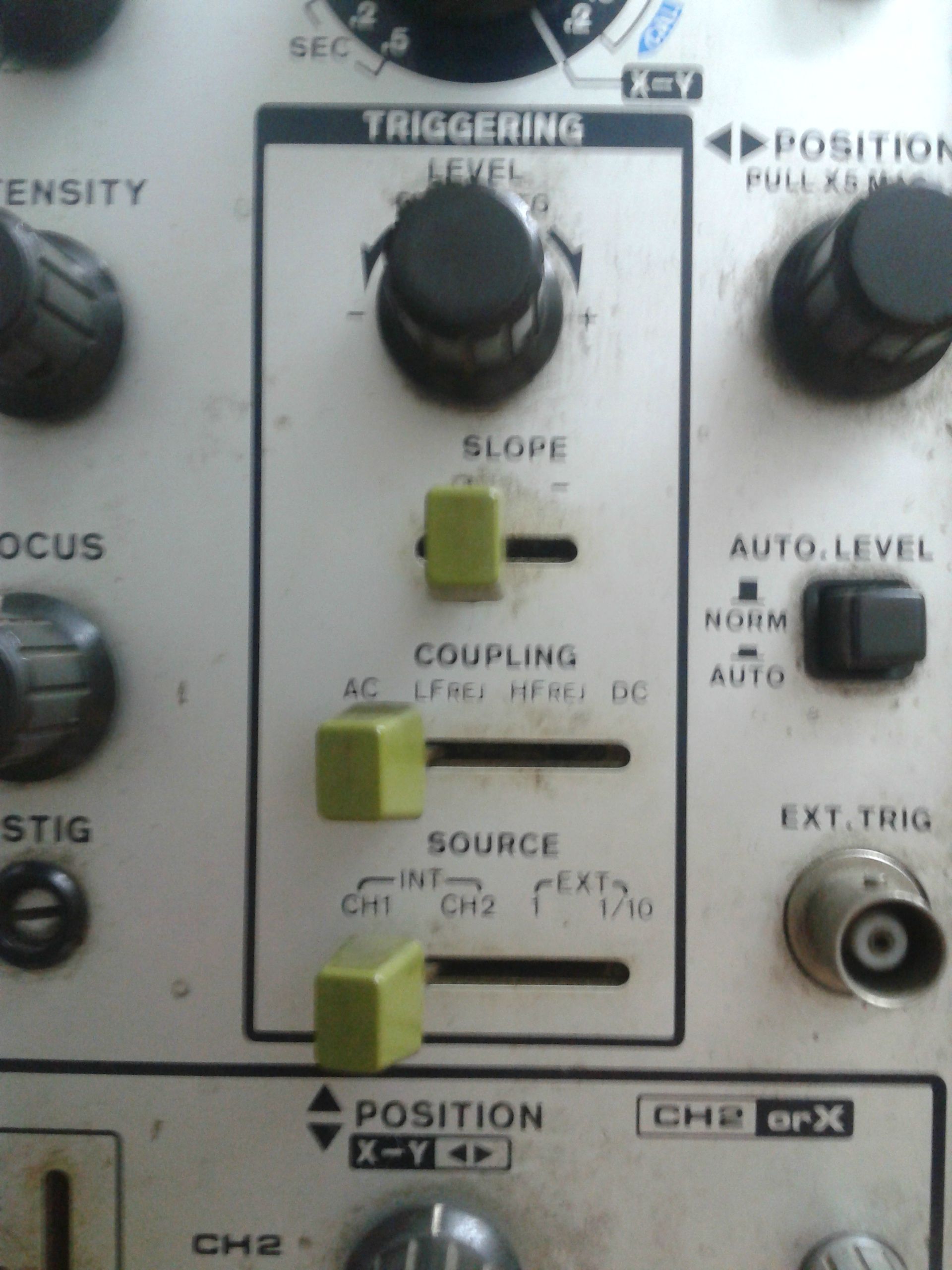 Pull out the trigger level knob. This will put it into "auto" trigger mode, which basically means it will automatically start a new sweep a short interval after the previous one ends. This will give you a continuous trace even with a DC input signal.

On modern scopes that have microprocessors, "auto" now means something completely different, in which the micro searches for a set of vertical and horizontal settings that give a "reasonable" display (YMMV).

The "Auto Level" button does something different: It uses a pair of peak detectors to determine the swing of the signal, and places the trigger level at some intermediate (50%?) value.

I suspect your scope is fine, and you just need to manually set the trigger mode, channel, and level. Even on today's modern digital scopes, hitting an AUTO button does things you don't want it to do.

Further, pretriggering on these dinosaurs is difficult or non existent, so the trigger point will be at the far left of the screen, and not the center, which you're probably used to.

You'd be better off starting your experience with a sine or square wave than with a DC battery. Is there a little doohickey coming off the front somewhere that provides a square wave output for adjusting your probe? That would be a convenient source to play with.

Not the answer you're looking for? Browse other questions tagged oscilloscope troubleshooting or ask your own question.

9
Why does Oscilloscope cause short?