So far I've learned these circuit analysis techniques for:

Circuit that can't be solved using only KCL: 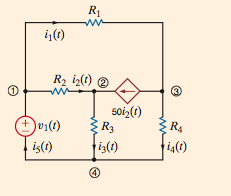 because using KCL at the nodes gives:

which are three linearly independent equations with 5 variables, so can't be solved.

"Superposition" is not a method for solving a circuit. It is a part of the other methods that is used when multiple sources are present in the circuit.

"Tellegen's Theorem", although I don't recall it from school, doesn't seem to produce a practical method of solving circuits since it only produces one equation for the circuit (according to a quick scan of Wikipedia). However I'd be glad to corrected on this point --- its not something you run into often in the real world.

Nodal analysis can not solve a circuit that contains a voltage source.

Mesh analysis can not solve a circuit that contains a current source.

If you want to solve a network that contains both voltage sources and current sources, you will need the modified nodal analysis. Using duality you could also imagine a "modified mesh analysis", however this method is not commonly used. The modified nodal analysis is the most commonly used method of solving circuits because it is easier to set up the equations for a computer.

Just the KCL and/or KVL equations are not sufficient to solve any circuit. These equations can be written simply from the topology of the circuit and take no account of what kind of elements are on each branch. For example they don't make any distinction between a branch being a resistor or a voltage source or a current source. You will always need to also include the characteristic equations for the elements on the branches to fully describe a circuit.