I'm trying to use a Xilinx xc9536xl to decode a current modulated signal but am having an issue with the pull ups on the pin. From what I've gathered the CPLD has pull-ups on the order of 10s of k ohms and they cannot be turned off which I did not anticipate.

The problem is that my circuit uses 500k resistor to generate the desired voltage level which is no where near strong enough to pull the CPLD input back down.

I have a PMOS currently available on the design that I could use and I've attached a proposed modification (in red) that I tried to implement unsuccessfully. Basically I'm trying to translate the 6V pulses on the output of the opamp into clean, 3V pulses on the input of the CPLD. Does anyone have any other suggestions to solve this issue?

Edit: In order to solve the problem initially, I fed the output of the opamp directly to the CPLD, however this swings from 0-6V which while tolerable isn't ideal, and it is not a very clean pulse.

After implementing my suggested changes, the output of the opamp only swings goes as high as 2V on most pulses (3V on some) and I'm missing pulses on the CPLD input.

Edit #2: Modified the circuit to remove opamp feedback and now I'm getting nice clean 6V pulses on G1 (0~6V) and the inverse on G2 (0~3V). The issue is that without the feedback loop I'm seeing some weird behaviour at the end of the pulses I wasn't seeing before.

Further, if the feedback loop is not required as I've found, would it make more sense to connect D1 to 3V3, replace the 500k with a strong pull down and drive the CPLD off S1? Should I put a series resistor on G1? 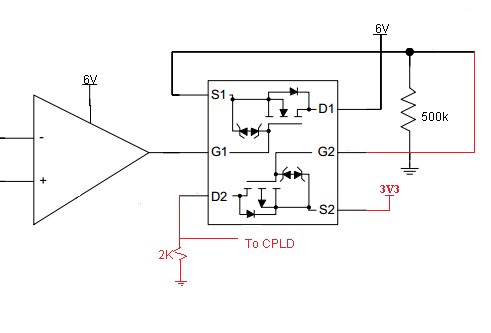 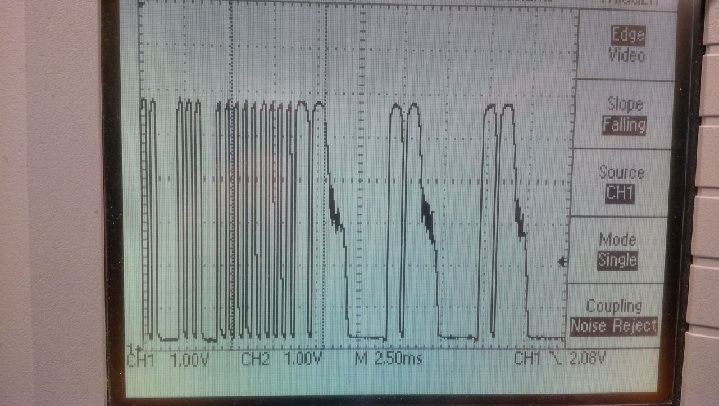 Edit #4: Stray pulses are still there after adding hysteresis, but the pulses are much cleaner. I think the driver is actually generating these pulses unnecessarily.

You're using the N-FET as a source follower, which is fine, but you've wired the P-FET up in such a way that it will invert the pulses — i.e., when the opamp is high, the CPLD input will be low, and vice-versa. Did you account for this in your CPLD design?

However, it isn't clear to me why you have the drain of the N-FET connected back to the noninverting input of the opamp, which creates a certain amount of negative feedback.

Not the answer you're looking for? Browse other questions tagged programmable-logic or ask your own question.