I recently bought an USB sound card to do some measurements/experiments with. What I want to do first is to build a simple amplifier for the headphone output.

Therefore I took the sound card apart and traced out the in- and outputs. Interestingly the ground of the female audio jack is not connected to the USB ground, it is DC biased with about 1.67 volts with respect to USB GND (half the AVDD supply voltage).

Can I just pull the audio jack's ground to USB ground via a resistor?

PS: The amplifier chip I intend to use is a MC34119 (Datasheet) and the USB sound card uses the VT1620A chipset (Datasheet)

Here is a simple schematic of the sound card (the male audio jack should be female actually): 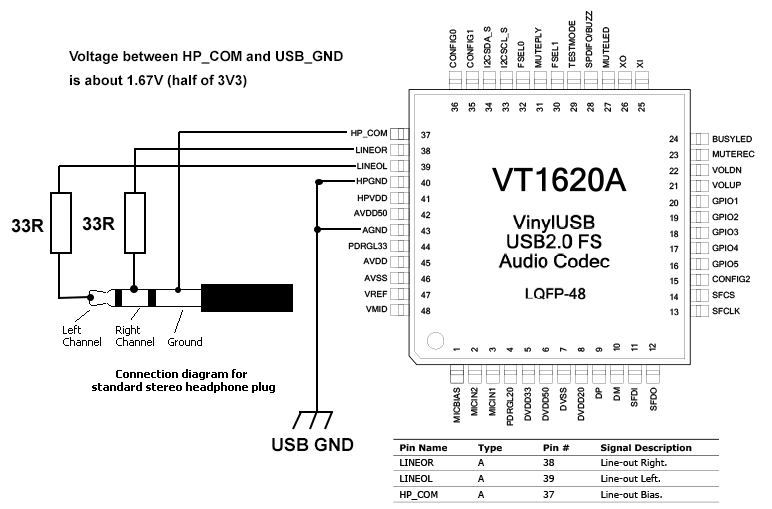 I would assume it's applying that DC-bias because it is cheaper to use an amplifier to generate a mid-rail then use proper series-capacitors to decouple the line out signals.

Basically, the line outputs need to be able to swing positive and negative. The general way this is done is with a series capacitor in each line-out connection, which blocks the DC. However, to get low enough frequency response with headphones, which can be as low as 8Ω, you need a very large capacitor, which is expensive/physically-large.

I would guess they have a additional output driver in the IC that simply buffers a resistor divider, and by using that, they remove the need for the series capacitor.

If you need to reference the outputs to a different circuit, you should use series capacitors to block the DC. Ideally, you should have a high-impedance connection to the USB ground, for any DC, and then the local ground of your circuit should actually be coupled to the HP_COM with a series capacitor.

They actually mention this indirectly in the datasheet: 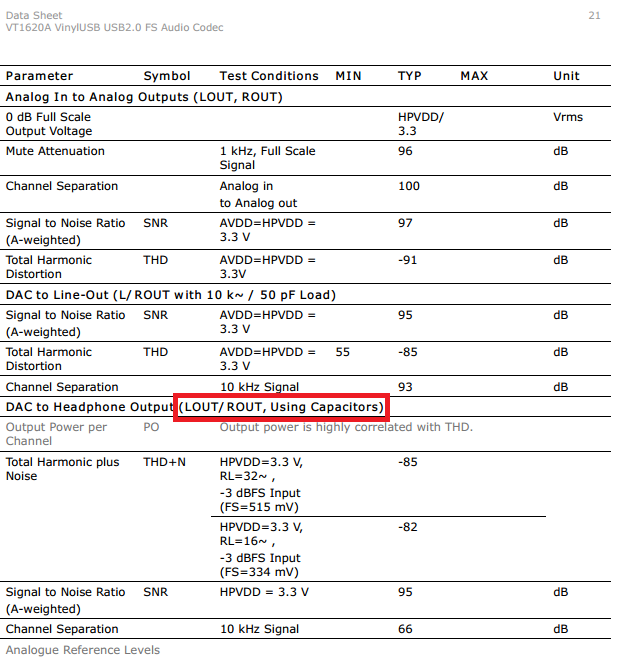 Not the answer you're looking for? Browse other questions tagged usb audio amplifier bias or ask your own question.

6
How do sound cards cope with negative voltage?
1
Line-out: why is there no impendance issue when plugging an amp rather than headphones?
0
Speaker and Headphones on Microcomputer
1
Using an audio amplifier with differential outputs with headphones
2
problem solving: line level to iphone attenuator buzzing sound
2
Add USB-C Jack to USB Device
2
How to wire headphone switch correctly in audio amp (LM4875) circuit?
1
Can I convert usb-male device to usb-female pluggable device?