What happens when supplying an LED with too low voltage?

What happens when supplying an LED with too low voltage? Will it just emit less light? I'm making an octocopter, and need to cut away as much weight as possible. I need to run the LED without cooling if possible. 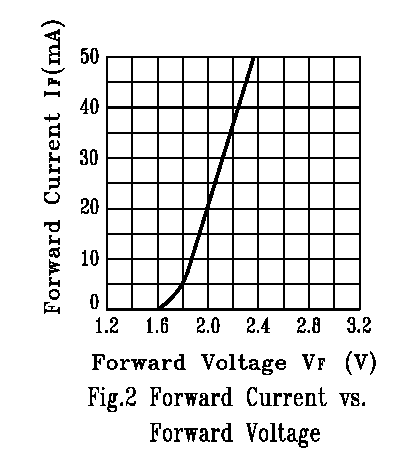 Y axis is current and x axis is voltage. At about 2V the LED takes 20mA and illuminates nicely. At 2.2V the current has shot-up to nearly 40mA and the LED is bright.

At 1.8V the current is about 5mA and the LED is a bit dim. At 1.6V or below the LED hardly takes any current and probably will barely be visible in a dark room.

Below this there is no business until you start going negative then at about -5V applied the LED usually dies, never to recover.

This is a typical old-fashioned red LED and, may not 100% apply to more modern LEDs exactly/verbatim but the general idea is the same.

Since you have mentioned the word cooling I assume you must be talking about a power LED. Standard LEDs generally do not require cooling. A power LED dissipates roughly 1/3 of the energy supplied to it as heat. Therefore it is possible to reduce the heat dissipation of the LED and hence the need for a heatsink by reducing the power supplied to the LED.

As others say, it will depend on that LED datasheet. 50W is pretty big, I doubt you'd be able to run that LED without cooling. Also, you'll want limit the brightness (and power usage / heating) of the power LED with current limiter (eg. driving it with constant current source) or with PWM, not by lowering voltage (LEDs do not behave the same as your typical lightbulb!)

And/or you could always use lower specd LED (with less power drawn, less heating, and of course less light produced).

Alternatively, as it is for octocopter, I'd guess you have 8 pretty good active cooling parts already, maybe you can use them to cool the LED instead of the big passive heatsink on it (just a small one + wind generated by propellers through it).

4
Driving a high-power LED at very low levels *efficiently*
7
What are the relevant parameters for a reverse-biased LED light sensor?
3
How to light an LED with very low voltage and low current?
3
LED and photodiode characteristics at very low currents
5
Will 74HC595 as LED sink damage LED when pin goes high?
0
Voltage Drop across an LED
0
Do LEDs care about too much voltage?
0
What is the voltage of LED string when not conducting?
0
LED modulated @ high voltage -vs- constant @ low voltage