how to drive two pairs of DC motors with arduino

I want to power four independent DC motors of a rover with arduino. Besides the voltage (6.0V) I don't have any other information about the motors.

I decided to make the rover change direction like a tank, meaning that each side's motors (right side and left side) have the same speed, but right side has different speed than left side. I also intent to use one or two L293B or simmilar chips.

I have thought of several ways of creating the circuit:

Case A: Four PWM pins of arduino, each one for controlling an induvidual motor. This means that two L293B chips are required:

Case B: Two PWM pins of arduino, each one splitting

Each one controls an induvidual motor. This means that two L293B chips are required.

Are there any advantages or dissadvantages for each one of these cases?

Also, I would like to ask something about the logic pins. For each channel except of the PWM, two logic pins are required:

Since everytime B = NOT(A), instead of using two logic pins, I want to use one logic pin splitting in two parts. The first part is connected directly to the L293B. The second part passes through a hex inverter, exits as an NOT(A) and is been connected to the L293B. Is that possible to work?

The major disadvantage in your choices/options is the L293 chip itself. It and it's cousins (SN754410 and L298) are likely very poor for what you might be trying to do. Certainly they can switch with PWM very well but the inefficiencies of the output transistors render them nearly useless on low voltage, high current applications. Take a look at this: - 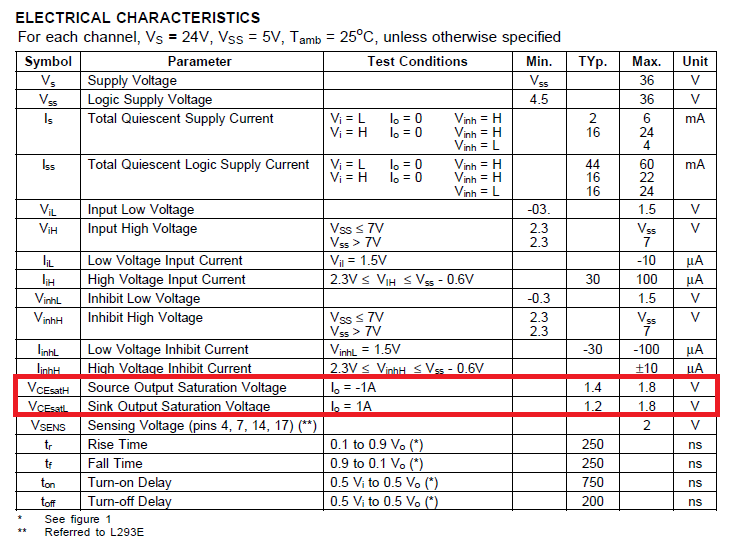 Highlighted in red are the areas of concern. This is what it means - when a transistor is turned hard on and conducting 1A, it will "lose" about 1.3V in the process. For a H bridge, two transistors are needed and therefore your motor receives battery voltage minus 2.6V when being driven.

So if you have a 6V battery and 6 volt motors the maximum voltage (typically) that you can put on your motor is 3.4V. Worst case 2.4V. There are much better devices than these such as the DRV8833. It uses MOSFETs and has a combined on-resistance in a full H bridge of 0.36 ohms - this means at 1A being drawn, the voltage "lost" is 0.36 volts. There are even more powerful devices too.

On your main question, I'd drive all four motors independently from separate PWM channels.

Not the answer you're looking for? Browse other questions tagged arduino dc-motor or ask your own question.