I've also seen people saying that warranties will be invalidated if devices/motor homes etc. are connected to anything other that a power source with a pure sine wave output.

I wonder what the world did before such power sources existed.

Is there science behind this? Surely a standard petrol generator with a good automatic voltage regulator (AVR) or an old-fashioned coil regulator will be enough to stabilize the output to run sensitive electronics like LCD televisions or computers?

Historically, inverters (electronic circuits that take DC power and convert it to AC to simulate the power line) were pretty awful in the waveshapes they produced.

Early inverters produced little better than square waves. This means they included significant power at frequencies that devices were not designed to handle. Most devices that are intended to plug into wall power take the sine shape of the voltage for granted. Some might count on the peaks of the sine being a particular voltage, while others count on the RMS. For a sine wave, the peaks are at \$\sqrt{2}\$ times the RMS, whereas for a square wave the peak and RMS are the same. This presents a problem in deciding what voltage square wave to produce. If you match the power line in RMS, then lightbulbs, toasters, and other "dumb" devices will largely work. However, electronic devices that full wave rectify the line will see a significantly lower voltage. If you raise the square wave voltage, then you might overdrive and damage devices that use the RMS.

The extra harmonics in the square wave can also cause problems on their own. Transformers designed for the power line frequency, like 60 Hz, might not deal well with the higher frequencies. Or these frequencies might cause extra current and heating without them being harnessed for more power. The sharp transitions can also overload electronics that is expecting a maximum slope from the power voltage. For example, just a simple capacitor accross the AC line would in theory conduct infinite current if the voltage changed infinitely quickly.

The next step in inverters was "modified sine", which had a extra ground "step" in the square wave. The point here is that this reduces the power in the harmonics relative to a full square wave. However, many of the problems with square waves were still present, although generally reduced.

Modern electronics that can efficiently switch at many times the power line frequency can produce a output voltage that is pretty close to a sine, meaning it has little harmonic content. This eliminates the issues with square wave and modified sine outputs, since the power line itself is ideally a sine. It is still a bit more expensive to produce inverters with sine wave outputs, but the extra cost is no longer that much and is getting steadily lower. Today, sine wave output inverters are common.

Note that inverters intended to drive the power line backwards, called grid-tie inverters, are all sine wave output. This is due to a lot of regulations covering what you are allowed to do with the power line, especially when you feed power backwards.

Inverters that have a "modified sine wave" output can put additional stress on some devices. 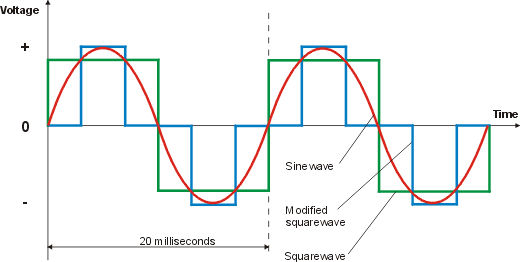 I don't think that caveat is meant to apply to non-electronic sources of power such as conventional (non-inverter type) generators.

The down side is that things that are sensitive to rate of change of voltage (capacitors, for sure, and maybe others) see a much higher dv/dt than with a sine wave. That can cause additional stress.

In my (limited) experience, it's more likely to manifest itself as a requirement to derate the inverter (iow you might have to use an inverter rated for much more wattage than the load requirements or it would shut down) than to cause actual damage to the load.

Petrol generators usually produce pretty good sine waveforms, it's just the frequency and amplitude that can be off.

What's of more concern are the square wave and stepped-sine UPS designs. Some older (and even some new) power factor corrector front ends could not track these waveforms and would not operate properly. They contain lots of harmonic content that can cause currents to flow that were not designed for in the original design, so it can be a problem for even non-PFC designs.

Most quality manufacturers today test with these types of waveforms, but some may still specify sine only.

See the attached picture of my WattsUP Pro ES meter when connected to the output of an old APC BackUPS Pro 650 unit for about 30 seconds. 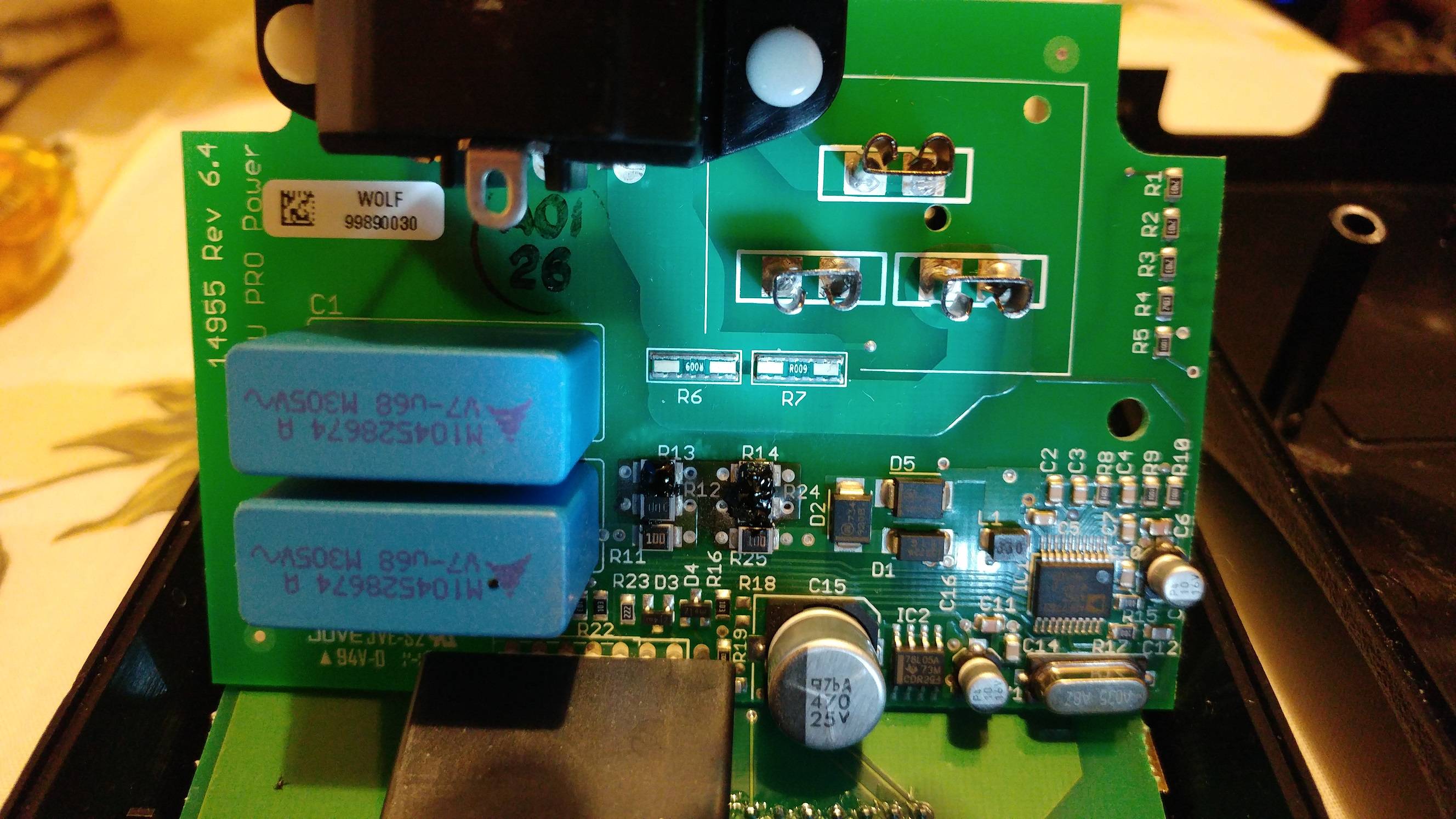 I had changed the battery and was trying to figure out if the battery runtime reported by the software was consistent with what I would get. The load was about 20-25 Watts. The meter was reading 179 Volts RMS (nominal voltage is 230V here) and I was wondering why. Then smoke came out and I immediately unplugged everything.

The meter is still functional and the 10 Ohm SMD resistors still read 10 Ohms but the plastic on four of the resistors have melted, along with some of the closed-up holes (probably these were included because through-the-hole parts were used in one revision of the product).

I have made two mistakes and learned two things in the process:

I wrote this answer in response to comments asking for examples of "catastrophic failure". BTW, the unit still powers an Ethernet switch, a media player and a 32-inch LED TV fine.

Historically and generally, it is a bad idea to use a cheap genset for expensive electronic equipment. This is because cheap gensets have poor voltage regulation. Apart from sparking, that wasn't really about the shape of the waveform.

In the old days, you started with the expectation that in the medium term you would destroy your electrical or electronic equipment by hanging it off a typical poorly regulated generator. Also, your light bulbs wouldn't last very long. But at least they were cheap to replace.

And by the way, those big coal or nuclear power stations output pure sine waves because they are carefully wound to do that. If they weren't so careful, they'd get distorted waveforms too. The distorted waveforms wouldn't bother you, but the power supply companies would loose substations.

I also have heard people saying that anything other than a "pure sine wave" will allegedly cause "noise" or "unwanted harmonics" or "stress" or unspecified "damage". Like you, I am skeptical about the alleged benefits of pure sine waves.

With only one exception so far (the problems with the "CR dropper" technique), every device I've seen so far will run just as well and in some cases better with a simple square-wave inverter than with a pure sine wave inverter.

When I look at the local mains power with an o'scope, the actual waveform is pretty far from a perfect sine. And so these hypothetical devices that allegedly won't work on anything other than a near-perfect sine won't work when plugged into any real wall outlet I've ever seen.

13
which kinds of electrical equipment need a pure sine wave inverter to work correctly?
1
Is this DSP sinewave inverter a marketing hype?