How to test a crystal resonator in board?

I have 2 quartz crystal resonators in my pcb board: 32.768 kHz & 20 MHz. They are connected to a Freescale MC12311 transceiver IC, which has an HCS08 micro-controller embedded in it. I want to test if these crystals are working properly or not.

How should I use these tools to test the crystals in board?

Edit1: I used both the oscilloscope and the frequency-meter (with x10 probes), but unfortunately there was nothing monitored at all.

As I see, no answer was accepted. Let me offer another answer. 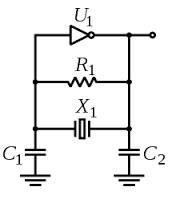 As one can see, the circuit is not symmetrical: the right side is output of some driver (usually designated as XO), and the left side is input to an inverting amplifier (usually designated as XI). Therefore it is relatively safe to probe the XO (output) end, provided that the probe has a relatively high impedance. An usual 1:10 passive probe with 1M input impedance should do the job. In practice, the output driver in circuit amplifier is made intentionally weak, typically no more than 1mA load capability, to prevent Xtal from being overddriven, but 1mA should be well enough to drive a 1M scope probe.

The probe tip capacitance may shift the frequency of oscillation by 20-50ppm, since it will change the circuit tune-up (Xtal load, C1 in series with C2). However, the probe load on XO should not break oscillations, unless the entire circuit is too marginal and does not meet the stability criteria (negative impedance of amplifier should be 3-5 times more than Xtal ESR). If the probe does this, consider the Xtal test as fail.

One should never try to probe the XI input, maybe only with a 100 MOhm probe, and only for curioucity. The reason is not in the tip capacitance (2-8-12pF or wahtever), but in inflicting a DC shift on XI pin due to finite probe impedance. The Pierce oscillator is a very delicate non-linear circuit, and it has a very important DC feedback component R1, which effectively adjusts the input DC level to the point of maximum amplification, usually about half way from ground to Vcc. The component R1 is usually 1MOhm and above, and the oscillations become centered at self-selected DC point. Attaching even a 10MOhm probe shifs this point down, amplification drops, and oscillations die.

And, of course, the best way to test for oscillations is not to touch it with probes, but to have an internal buffer with output to some otherGPIO test pin.

I had a similar debugging issue once with my Atmel ATMEGA328P controllers, the 8Mhz ceramic resonators were not seemingly working. I had a Rigol dual channel cheapo oscilloscope, and had scoped a working board I made previously and the nice 8Mhz signal was easily seen, with no problem due to loading by the probes. You should not worry about the probe's effect on the crystal.

The main issue I found was my controller that was meant to drive the crystal did not have it's fuses set correctly to use the external crystal. Once I had burned the fuses to select external crystal, the resonators showed life signs!

So it's actually a good point to ensure your microcontroller that is connected to the crystal has been set to use the crystal, otherwise there is nothing to drive power into it to make it oscillate. Once you have made sure that is the case, you can then start to see if it's PCB or other trace issues, grounding problems, wrong pins etc.

The external components make the oscillator look symmetrical, but there is an amplifier on the chip that is anything but. The oscillator pin that is on the output side will have a lower impedance and putting the scope probe there will not affect it nearly as much as probing the input pin.

If it's oscillating, the output will have a larger amplitude than the input; it may also not be a very good sinewave. The input side will be lower and should be a sine wave (having been filtered by the crystal).

If it is not oscillating, the input will be noisier and should be something like half the supply voltage. The output pin will be cleaner looking and may be at VDD or ground. Some of this will vary with the design of the chip (and the configuration).

If you have a sensitive communications receiver, like those used in amateur radio, hooking a wire between the receiver antenna input, and the other end an inch away from the oscillator circiut , without even touching the circuit, tuning the receiver around the crystal frequency, you should hear a beat. And, spot on the exact frequency.

Not the answer you're looking for? Browse other questions tagged oscillator oscilloscope crystal test frequency-measurement or ask your own question.

9
SMD Crystal solder(?) problem and any recommended test procedure
1
26MHz crystal not oscillating - strange capacitor behavior
3
How do crystal oscillators start?
0
Could an external circuit with 74HC series IC reliably test a 24 MHz crystal?
2
Why does my crystal resonate at 4 times the specified frequency?
8
What frequency stability crystal do we need?