I'm trying to regulate the voltage of 9 volts battery to DC motor but didn't work. This is my scheme:

The original scheme is for led and just wondering why it didn't work for DC motor.

Here is the image of DC motor with 104 capacitor. 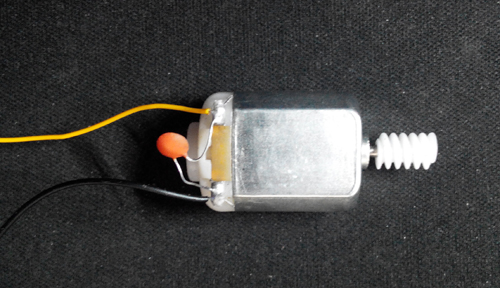 Please give me an idea why it is not working.

The motor needs a lot more current than the LED does. You need to reduce the value of R1, or remove it altogether, connecting the motor directly to the regulator (assuming the motor can take the full 5V).

Also, the 78L05 is only good for 100 mA in any case; if the motor requires more than this, bad things will happen. Even at 100 mA, the 78L05 will probably be dissipating more power than is good for it, and it will (hopefully) shut down to preserve itself.

You have a huge resistance on regulator so you have (not counting motor resistance) 5V/470Ohms = 10.6mA which is hardly any current to be driving a motor. It's enough to drive an LED tho. Either make that resistor smaller or remove it entirely. I would think that the motor could handle a full 5V.

As others have stated, the resistor R1 is not necessary - the old schematic used as reference is for an LED, which usually (in poor efficiency circuits) use ballast resistors for current limiting.

The 7805 regulator must be checked for power ratings - the motor will only draw large currents when starting, and when stalling (you stop the motor from moving with your fingers, or something gets jammed in it).

If you have like a switch or something to allow the 7805 to regulate before turning on the motor, I suggest you should put a 100uF or higher electrolytic capacitor from the 7805 output to ground, to allow it to store energy for the start current of the motor. Please note this is not actually required for operation - things will work fine without it.

the diode 1N4004 will also explode if you do not check it's current rating as well. For the LED circuit it would only be passing 6-7mA in order to give the 5V rail ~10mA for the LED. With this circuit, the diode may have to pass much higher (~100mA, or in start/stall conditions much more). I suggest you completely remove the diode, as the 7805 most likely has a diode-like pass-transistor or MOSFET with diode anyway.

If you really wanted, place the diode from the 5V output to ground ("pointing" at the 5V rail) in order to catch reverse voltage spikes from the motor when it turns on/off due to the inherent inductive characteristics of DC motors. The idea is that it's in parallel with the motor pins. Place it in parallel to that little capacitor if you want.

If you do actually replace the R1 with a 47Ohm resistor, this will limit the current to ~100mA, but be careful that your resistor does not get too hot. a 1/8 or 1/4 Watt resistor might not be good enough. Try for a 1/2 -> 1 Watt power resistor if you go down that path. Please not that the motor will work fine without the resistor - it has it's own internal resistance and when operating will only draw the current that it "needs".

Not the answer you're looking for? Browse other questions tagged voltage-regulator dc-motor or ask your own question.