Why have two NOT gates in series?

I have recently been looking at the datasheets for the 74HC139 IC in order to see if it was suitable for my project, and have come across the following logic diagram which strikes me as a little bit odd:

For each of the inputs Yn, there are two NOT gates after the triple-input NAND gate; I don't understand why this is necessary as simple boolean logic tells us:

Therefore I am assuming there is some electronic based reason why there are two inverters before the output? I have heard not gates called Inverting buffers before, and these supposedly isolate the circuit before and after, however, I cannot claim to understand the use of this so I'd appreciate any enlightenment!

The time required for a gate to switch is dependent upon the amount of capacitive load it must drive, the size of the transistors, and the number of transistors in series. An inverter consists of one NFET (N-channel Field Effect Transistor) and one PFET (P-channel FET); a three-input NAND gate has three PFETs in parallel and three NFETs in series. In order for a 3-input NAND gate to switch an output low as quickly as could an inverter, each of the three NFETs would have to be three times as big as would be the single NFET of an inverter.

For a small chip such as this one, the only transistors which have to drive any significant load are those connected to output pins. Using four outputs driven by inverters, it will be necessary to have four big PFETs and four big NFETs, plus a bunch of little ones. If one assigns the NFETs an area of "1", the PFETs would probably have an area of about 1.5 (P-channel material doesn't work quite as well as N-channel), for a total area of about 10. If the outputs were driven directly by NAND gates, it would be necessary to use twelve big PFETs (total area 18) and twelve huge NFETs (total area 36, for a total area of about 54. Adding 20 little NFETs and 20 little PFETs [12 each for the NAND, and 8 each for inverters] the circuit will reduce the area consumed by big transistors by 44 units-more than 80%!

Although there are some occasions when an output pin will be driven directly by a "logic gate" other than an inverter, driving outputs in such a fashion increases greatly the area required for output transistors; it's generally only worthwhile in cases where e.g. a device has two power-supply inputs and it must be able to drive its output low even when only one supply is working.

If the NAND gate is made in the obvious way (three parallel transistors to GND and three series transistors to Vdd) then it will have low source capability, the transitions will not be sharp, and the delay time will be load capacitance dependent. Adding a buffer (or two to restore the logic) cleans up all those problems.

Here is what a typical unbuffered inverter (schematic like this)...

..transfer function (output vs. input shown on line (1)) looks like: 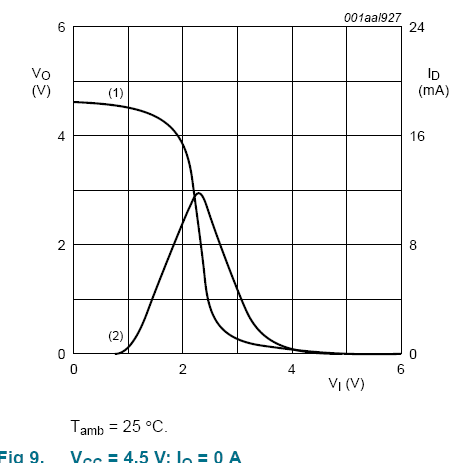 With a buffer, the line (1) will be much closer to a square shape. (the second line is the current that is drawn).

This is silly if you are just trying to communicate the logic of a chip. Probably it is drawn this way because internally there are some buffering stages. The internal gates are probably very small with little drive capability. Signals that go outside need to go thru a buffer that can source and sink much more current. Somehow this implementation detail seems to have made it into the logical description, where it doesn't belong. The logic would be the same if the two inverters in series were replaced by a wire. Then there should be a overall speed and current drive spec for the outputs. You could just as well envision slower and more powerful NAND gates.

While this may seem like a pointless thing to do, it does have practical application. This will boost the weak output signal. The level is unchanged, but the full current sourcing or sinking capabilities of final inverter are available to drive a load resistance if needed

In the past, such arrangement was used for a delay.

Not the answer you're looking for? Browse other questions tagged digital-logic integrated-circuit inverter or ask your own question.

0
What is the point of 2 inverters in series?
0
Number of not gates in multiplexer

6
Why are sum-of-products implementations more popular than product-of-sums implementations?
2
Counter is missing an output signal
7
Can an operational amplifier circuit be made entirely out of diode Nand and Nor gates?
1
Is inverting the output of a CMOS network a bad practice?
2
Question about logic gate optimization and CMOS implementations
1
Logic operations in modern processor
1
Rewriting a boolean expression only using NAND
10
What are the names of all possible logic gates with 1-or-2-bit input and 1-bit output?
0
Is there an intuitive reason for why NAND gate is a universal gate?
1
Understanding the working of a NAND GATE using NMOS Transistors