Background: I am preparing for a full-time employment starting in May. I am coming from a computer engineering background so I only have some working knowledge regarding EE. The job duty is Firmware Engineer - I will be mostly dealing with writing firmware on a micro-controller for a switching-mode power supply board.

My question is: in digital power electronic, how does the PWM generated by the MCU get translated into a output voltage? By looking at the image below, I understand how the transformer, rectifier, and filter works. What I want to know is: what's going on with the waveform between the regulator and the load such that the output voltage becomes so smooth without noise, i.e. how the input waveform of the regulator get transformed into a straight line. Please explain in detail how the PWM, MOSFET, output Inductor, and output Capacitor are involved in this process. 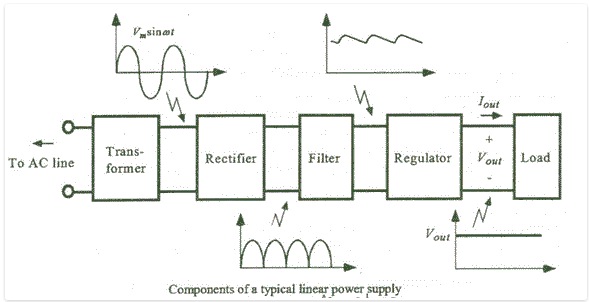 I have done quite a lot of researches online learning power electronics by myself. However, I am experiencing a huge gap in between the digital world and the analog world (as a computer engineer, I only have experience with digital circuit). By looking at the picture of a digital power regulator below, I know that the MCU is responsible for generating a PWM to switch On and Off of a power MOSFET switch - depending on the difference between a reference voltage and a feedback voltage, the On and Off time varies to regulate the output voltage.

My analog knowledge is quite limited, what I understand so far is:

But I must have missed something here. I have been struggling with seeing the whole picture of all these analog components working together to form a complete working regulator.

And, why there are two MOSFET instead of one? 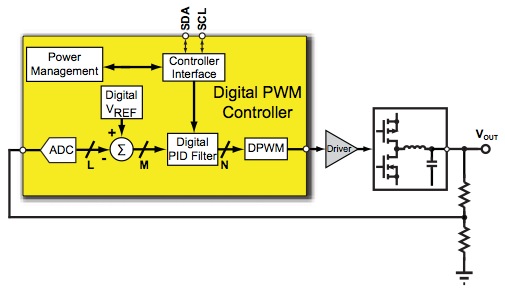 Please help me out here.

You have closed-loop feedback from the output to the controller. What's basically happening is that the resistor divider is providing a fraction of the output voltage. This is compared against Vref (a very constant voltage). If the measured voltage is lower than this Vref, then the high side pmos transitor needs to turn on. If the voltage is higher than Vref, then the nmos transistor needs to turn on to allow current to continue flowing through the inductor.

Note that most Power Electronics books don't show active rectification so usually you'll see the NMOS there replaced with just a diode pointing up from ground. Active rectification with the NMOS allows a much lower voltage drop between ground and the inductor so you waste less power. If a diode is there, there's generally a significant voltage drop on the order of 0.1 to 0.7 volts, which in a low-voltage power supply is very significant.

More detailed analysis: Vref provides a fraction of the output voltage. ADC (analog to digital converter) converts the voltage to a digital number. Then this value is subtracted from a digital reference voltage number. If the number is positive, then the measured value is less than Vref. The converse is true as well. This information then gets sent into a digital PID (proportional, integral, differential) controller which allows relatively easy control over the output without having too much overshoot, undershoot, or oscillations by a simple algorithm. This algorithm then sends the information along to the driver to go high or low resulting in as smooth of a voltage as possible. The PID controller allows changes in the output load, say turning on a motor, to not droop the voltage too long before the DPWM (digital PWM) corrects it by increasing the duty-cycle of the output to drive the PMOS higher for longer amounts of time to source the extra current needed for the motor turn on.

The nmos or diode is not there to drain power from the system. Rather it's there to allow the load to see uninterrupted current. If there was just a pmos there being turned on and off, when the pmos turns off, there's now an open circuit and the load would no longer receive any power at all. Instead, a diode or nmos allows current to continue flowing (from ground up through the inductor) to the load.

The capacitor is a circuit element that tends to resist changes in voltage. This allows the load to see a relatively constant voltage regardless of load changes or the choppy wave coming from the pwm.

The waveforms from the driver will be a variable duty-cycle PWM, i.e. a square wave with high and low times varying each cycle depending upon load. The output from Mosfets should be the inverse of that signal because the mosfets in that configuration act as an inverter. The high-side voltage of this corresponds to the input wave you see in the block diagram picture corresponding to the regulator. So that wave goes into the top of the PMOS. The output of the mosfets & the input of the inductor should switch back and forth between 0 and the wave looking waveform which would sort of be rough square wave. And the output side of it should be the flat line you're shown in the block diagram as the output.

In retrospect of making this explanation, it does seem like a lot of work to go from a bumpy wave -> square wave -> flat line, but there's many advantages including, much smoother voltage regulation, faster response to changes in load, and the ability to lower the voltage to lower than the bumpy wave that was input into it with high efficiency.

Not the answer you're looking for? Browse other questions tagged microcontroller mosfet voltage-regulator pwm switch-mode-power-supply or ask your own question.

10
PWM & output voltage
4
Easiest way to go from analog input to PWM output?
2
Power switching a higher DC supply from a mcu
5
Why is voltage gradually increasing from the source of a power MOSFET?
1
Why is the voltage dropping when using pwm output pin of a microcontroller?
0
How to connect PWM output from a dsPIC MCU to 12V LEDs?
0
Powering MCU with capacitor during short power off when MCU VCC comes from LDO?
15
Where do the oscillations on the output voltage of my buck converter come from?
0
What are the issues of using the analog output of a microcontroller to control a power MOSFET instead of using digital pins and PWM?