How to realize a zero at infinity ? RC synthesis 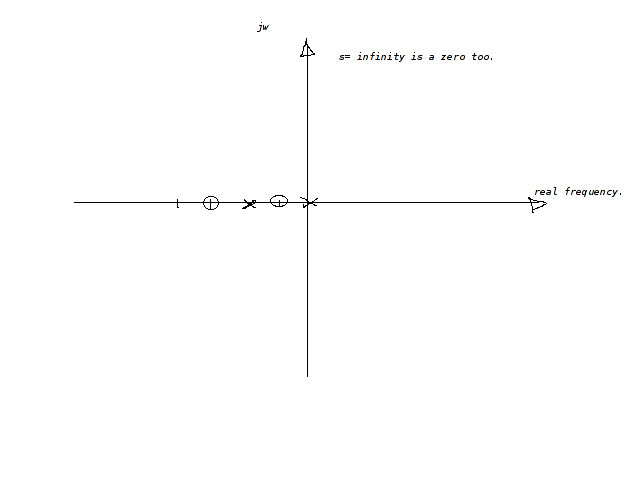 Since now I have come up with the following equation.

But I have no idea about how could I fabricate a zero at infinity there? $$ \lim_{s \to \infty} {Z(s)} =1 $$ does not equal to zero there. So any idea how could I made it possible to make it go to zero when it goes 's' to infinity ? How could I change my impedance function? Could you suggest a change?

Should be realizable according to this: "Physically realizable control systems must have a number of poles greater than or equal to the number of zeros. Systems that satisfy this relationship are called proper."

Comment answer: The question you ask is actually quite complicated. Beyond second order RC filters, the math gets painful. Usually active filter design is much easier to synthesize because once you build an active filter building block, you can just link more to it without each block effecting the other. This is due to active filters having characteristics such as high input impedance and low output impedance. If you really wanted to go with RC's I've found a couple places to start from.

The first one shows a bridged-tee notched filter which gives you two poles and two zeros. The second link is just the rc transfer function. If you put these two together you should have what you're after. Since these filters are not active though, once you create the entire circuit, you have to recalculate the entire transfer function because the first filter will affect the second filter. I reiterate here, this is not a simple task.

The alternate is an active filter. Since you have two zeros that don't lie at zero (1 and 3) you end up needing a notch filter, which doesn't have too much literature on. Most filter texts focus on Low-pass, high-pass and band-pass. I pulled up this at least:
http://www.radio-electronics.com/info/circuits/opamp_notch_filter/opamp_notch_filter.php
Then you would add a low pass filter (adding another pole probably at 0 because poles generally come in pairs). Using something like a sallen-key low pass:
http://en.wikipedia.org/wiki/Sallen%E2%80%93Key_topology#Application:_Low-pass_filter
This allows you to combine the two filters without having to re-derive any transfer functions because others have already done that work for you.

As a last note, if you're really interested in how these things are made on an IC, keep in mind that in an integrated circuit, resistors come at great cost: they take up lots of space and prone to vary between chips. To work around this issue, Gm-C (transconductance-C) filters are used. If you're interested in that: http://www.analog.com/library/analogdialogue/archives/43-09/edch%208%20filter.pdf

Not the answer you're looking for? Browse other questions tagged impedance plot or ask your own question.