How to use MOSFET thermal data for simulating in software

I have a MOSFET (irfb7434pbf) acting as load switch in a circuit.

The usual operation is well within the SOA region, but, on situations where the load would short circuit, the MOSFET is set to limit the current to a certain value. The ambient temperature is 20˚C and the MOSFET is allowed to cool down before the next short.

During the time the MOSFET is in current limitation I have a MCU integrating the current and the drop over the MOSFET to find out the MOSFETs current thermal status.
And yes, you guessed right, the MOSFET dies. Not always, not the first time around, but it does die.

Now, checking the MOSFET's data sheet the SOA looks like this: 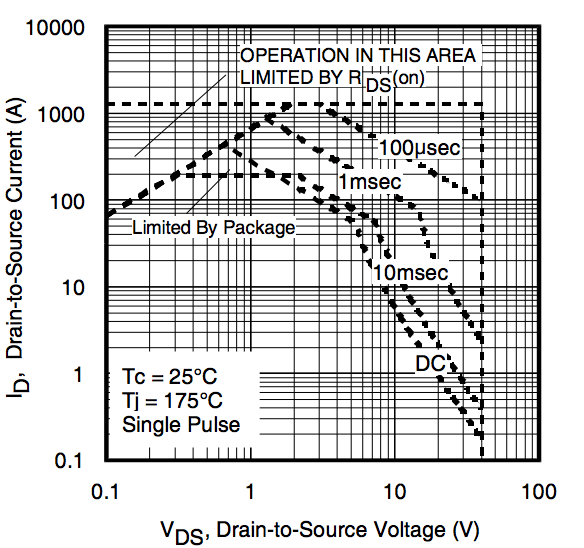 I set the MOSFET to limit at 45A, which produces a voltage drop of 8.7V, which is outside of the SOA area.

And then it is when it gets tricky. In order to simulate the MOSFET's behaviour I run software, which uses the RthJC of the MOSFET for calculations.

Maybe I am not interpreting things right. Does it make sense that the MOSFET dies?

In the same datasheet there's a "maximum" power dissipation of 294W, which is lower than the power in one of my shorts. Is that the limit I am hitting?

The IRFB7434 is a rather modern MOSFET, possibly employing trench gate structures. In linear operation, these modern MOSFETs can exhibit a positive temperature coefficient on a local scale, leading to current localization followed by local overheating and finally by failure. Further information on these effects can be found in the application note "Automotive MOSFETs in Linear Applications: Thermal Instability" by Infineon.

All SOA diagrams I have encountered so far in datasheets do not take this effect into account and are thus invalid for describing linear operation behavior. This localization effect also renders thermal models invalid if these are based on the thermal impedance graph, as a homogeneous power loss density within the silicon die is assumed.

It is important to note that the SOA data is not actually measured, it is calculated from models and statistical data. Apparently, the models used by most semiconductor manufacturers are somewhat outdated.

Long story short: You cannot use the SOA diagram of modern MOSFETs or the thermal impedance diagram to predict their behavior in linear operation. Maybe you can modify your circuit to prevent linear operation.

Old question, but I find important to note that SOA can be used only for rated(datasheet) cooling conditions. In order to use this particular SOA, the mosfet must be provided with a cooling system that dissipates 294W of power for indefinite time while keeping case temperature at 25 C!

OP did not mention cooling conditions (heatsink thermal resistance etc.), so it may be the reason of failure.

Not the answer you're looking for? Browse other questions tagged microcontroller power mosfet datasheet thermal or ask your own question.