What is the symbol on the supply voltage that looks like a shaded-in capacitor?

I am looking at a datasheet for NJM2073 (dual low-voltage power amplifier). On the fourth page, there is a sample circuit; right at the V+ input there is a symbol that looks like a capacitor. However, it looks like it is shaded in. What is that? 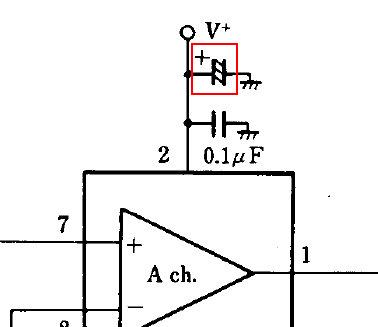 This is a polarized (electrolytic) capacitor

While all the schematic symbols used for capacitors will have two lines or a line and a curve in parallel, thus looking like a parallel-plate capacitor, the precise nature of these symbols varies across region. EIA (North American) practice uses a parallel-line-and-curve symbol for a non-polarized capacitor and adds a + polarity marker on the line side for polarized electrolytics, while IEC/EN (European) practice uses a two-line symbol for non-polarized capacitors and a line-and-box symbol with the box on the + side, along with the + sign for polarity, for polarized capacitors, and EIAJ (Japanese) practice is to use the shading/crosshatching between the two lines to denote polarity instead of the box, as they use the two-line symbol as well.

BTW: if you're wondering why the US uses the line-and-curve capacitor symbol, it's to avoid confusion with the parallel-lines symbol used for relay, and more importantly contactor, contacts in industrial electrical work (such as ladder logic diagrams and industrial wiring diagrams).

5
What is the meaning / significance of this Capacitor Symbol?
4
Why is this component that looks like a capacitor with ground lines in this circuit diagram different from a polarized capacitor?
1
Capacitor Circuit question