Can the output of two 15-amp motor drivers be hooked up in series to achieve a 30-amp tolerance?

I had a cheap 15-amp motor driver that I bought on eBay. You can see product details here.

I was planning to use this motor driver to power my robot, which uses two 24v wheelchair motors. Then I connected both motors on the motor driver and wrote a simple program that gradually accelerated the motors from 0% to full power. I hooked up two 12v car batteries in series (making 24v) and then connecting this voltage to the controller.

As soon as I ran the program, the motors worked for a few seconds and then smoke came out the motor driver. After I inspected the motor driver, I that saw a couple of MOSFETs were fried along with part of the circuit board. Assume my batteries and motors were correctly connected to the motor driver. Under this case, I would conclude that my motor driver got was damaged due to over-current. The voltage clearly did not exceed the maximum rating. Although I don't exactly know the current rating of the motors, I heard a few experts say that my motors use around 15-amps to 30-amps depending on the load applied.

Again, this brings me to this question: Can I hook up the output of two 15-amp motor drivers in series to achieve a 30-amp tolerance?

Medium answer: No, because outside of perfect conditions, you can never guarantee that both drives in parallel are equally turned on at the same time. A few milliseconds difference and the motor will attempt to pull the current from the lowest impedence path, the one driver that's more fully on, and boom, kill it. Then the second one becomes the lowest impedence path, and that gets killed too. It's a lose-lose situation.

As the others have suggested, since your driver uses external fets to provide the actual current handling, you could replace those with similar but higher rated parts.

Long answer: maybe but probably NO, because of the following reasons. First of all you are misusing the word "series": you can't actually connect two of these things in series since they have more than two terminals, anyway if you hook their outputs in someting that might seem "series", and that's not possible since they seem to be full bridge controller, what you would achieve is dobule the maximum voltage rating. You might want to connect them in parallel thus dobuling the maximum output current. That might actually work, but there's some reasons why it probably won't. Have a look at this pic: 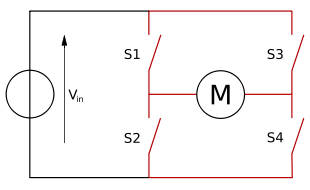 Assuming you understand basic electronics, the circuit you are seeing is pretty simple: when S1 and S4 are closed the motor spins in one direction, when S3 and S2 are it spin reverse. Since you say you wrote an application that goes from 0% to 100% I'm assuming that you know also what PWM is so I'm just skipping that part. As you can see from the photos from ebay that's exactly your circuit, the eight big components with metal tabs on theyr back are the MOSfets, four per each channel, and they are used as switches.

So let's say you take two full bridge circuits, A and B, you'll have \$S1_A\$, \$S1_B\$ and so on. Let's assume you hook the node \$S1_A - S2_A\$ to the node \$S1_B - S2_B\$ and similarly with \$S3_x\$ and \$S4_x\$, then you connect your motor just as in the picture and fire up your program. Of course you need to tie togheter the PWM and direction input pins of both the controllers. Assuming you connected all up correctly the corresponding switches should be on or off at the same time, so you have two parallel mosfets, that is good, and they can actually bring double the current. But here comes the trick: there's some sort of circuitry between your control inputs and the mosfet gates, U1,2,3,4,5,6. There also is a step up, but focusing on the MOS driver part we can isolate the problem. These circuits take your TTL or CMOS inputs and translate them in gate volages for the mosfets. These circuits introduce delays, and dealys differ from one chip to the other due to manufacturing tolerances. It is then possible that due to different delays one circuit switch off S1 and S4 and then turns on S2 and S3 while the other is still keeping S1 and S4 on. What do you get? A short circuit on the batteries, which is very very bad. The thing might even work, maybe the short circuit time is so small that the mos can actually carry the current, but they'd get very hot, your motor would be braking (shorted terminals!) and efficiency would be not acceptable. What can you do about that?

Easy solution: try and see if it works. I discourage this because it might work, without proper equipment you can't really see what's happening and you will end up with an unreliable design.

Easiest soultion: find out your motor specs and buy the correct drivers

Tricky solution: that's what you are looking for. The mos driver circuit is aware of the danger of shorting the supply, so when it switches off S1 and S4 it waits some time before switching on S2 and S3. If you provide U1 and U2 codes (can't read them from the photos) I can help you check the datasheets to see if this "dead time" is long enough to let you actually hook up the outputs in parallel and rest easy. As Phil noted this solution is still a bad idea because also if you can be extra sure that no supply short circuit will ever occur it is not possible to switch all the mos at the same time, so there will be (brief) moments in which only one mos supplies all the current, that is twice its maximum or four times the maximum power.

Not the answer you're looking for? Browse other questions tagged voltage current motor driver amperage or ask your own question.

3
DC Motor driver interfacing problem Atmega32 Board
0
How can I limit the current in a 12v car battery to be safe for my 25a motor driver?
0
Stepper motor is heating up?
0
How to reduce current
0
Is there any way I can power my 120-220V AC motor from a battery
0
Powering a 5v raspberry pi, a 12v motor and a 24v motor using 2 batteries charged with a solar panel
0
Inconsistency Issues With Stepper Motor
0
24V 250W motors