Why are switchers more efficient than linear regulators?

I know switchers can get hot; I have one on a board that gets so hot you can barely touch it, but then again it's only 2 1/2 millimeters on each side and looks like an ant compared to a through-hole 7805 with its heat sink.

Linear regulators work by effectively putting a controlled variable resistor between the source and load. All of the current for the load flows through this resistive element. And the voltage across it is equal to the difference between source voltage and load voltage. So the power dissipated is

which is, of course, 0 W. Typically much of the inefficiency in the real world is due to power lost during the very short switching inteval between the "on" and "off" parts of the cycle.

Usually switching regulators are more efficient, but not always.

An ideal linear regulator has a voltage drop \$V_{IN} - V_{OUT}\$ and there is a linear pass element such as a transistor that acts like a resistor, so the power loss in the ideal case is P = \$I \cdot (V_{IN} - V_{OUT})\$, as you say. That's the ideal case, in reality the regulator needs a bit of current to work, and there may be a component that depends on the output current. Some LDO linear regulators that depend on lateral PNP pass elements can have very high consumption close to the dropout- perhaps 100mA wasted for 1A output current (because PNP transistors made with some IC processes tend to be have pretty crappy current gain).

Where the switch is a transistor, and D1 may be a diode or it may be another transistor. In the ideal case, there is no energy loss mechanism. The diode either blocks perfectly or conducts perfectly, the switch does the same, the inductor has no DC resistance, and the capacitor has no ESR. So the power in equals the power out. Of course reality can only approach that ideal. There will be losses that are 'overhead' and losses that increase with increasing current.

Note that the inductor is a critical part of this circuit- if you tried to omit it, the immovable (in the short term) voltage on C1 would come up against the immovable voltage on Vin and the current would become infinite. In a real circuit, SW1 would have some resistance and it would get as hot as the pass transistor in the linear regulator (except it would also be making tons of EMI).

It is well-know that switching regulators are more efficient then linear regulators.

To a point. Putting 3.5V into a LDO 3.3V linear regulator gives an efficiency of 94%. You'd be hard-pressed to find a switching regulator that can do that.

I also know that linear regulator have to dissipate the different between the input voltage and output voltage times the current as heat.

Ideal switchers do not dissipate any power. They take a bit of power from the input side, store it and then release it on the output side.

Energy is stored either in a magnetic field inside an inductor or an electric field in a capacitor.

Due to non-idealities of real components, like ESR in inductors, they dissipate a bit of power. They also loose some power during transistor switching. Some energy is also lost in the controller.

Then, during the off time, the energy storage circuit elements deliver power to the load.

This is the crucial difference - only enough power is drawn from the source during the on time to power the load continuously.

For example, if the load requires a continuous 5W, the source might deliver 10W 50% of the time and 0W the remaining 50% for an average power of 5W. The energy storage circuit elements 'smooth' the energy flow - absorbing excess power during the on time and then delivering it during the off time.

An ideal buck-boost switching regulator may be modeled as a pair of caps connected directly to the input and output, a coil, and some routing circuitry which can switch between three configurations (a buck-only, boost-only, or inverting circuit would only need two).

Assume components behave in ideal fashion (no resistive or switching losses, etc.) the source caps sit at 10V, the output draws 1A, the switcher spends half its time in the first configuration, half in the third, and cycles fast enough that the cap voltages and coil current don't have a chance to change much during each cycle.

To bore everyone with the good old water-flow analogy I'll add this: assume we have three height levels H1, H½, H0; a supply of water comes from H1, then flows at H½ a bit to its destination, a mill or something, and then back all the way on H0. The regulator is at the transition from H1 to H½. 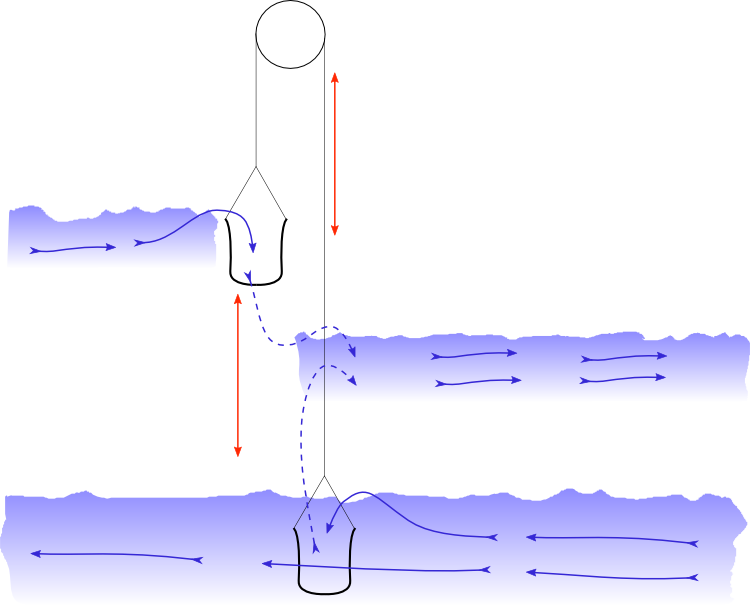 Not the answer you're looking for? Browse other questions tagged switching-regulator linear-regulator or ask your own question.