What's the difference between a FP, gain guided and DFB laser diode?

What is the difference between a Fabry-Perot (FP), a gain-guided and a Distributed Feedback (DFB) laser diode?

I think Fabry-Perot is the default configuration, gain-guided has something to do with a strip electrode (but I'm not clear on how it works) and DFB uses a Bragg-grating to limit the output of the laser to a single wavelength. However, I'm still a little blurry on the details. Help clearing up the differences would be appreciated.

Fabry-Perot laser diodes are lasers whose mirrors are simply the flat cleaved surfaces at the ends of the laser chip.

Distributed feedback (DFB) laser diodes are lasers that have a grating structure in the cavity that produces multiple reflections throughout the cavity. This leads to narrower linewidths than are produced by FP lasers. 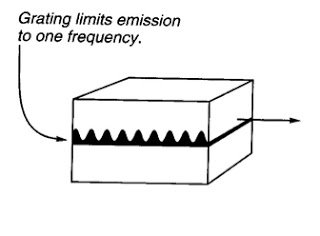 Another type you didn't ask about is the Distributed Bragg reflector (DBR) laser. A DBR typically has two separate grating regions, on either side of the gain region. They're usually distinguished from the DFB because the grating doesn't overlap the gain region, although there is some grey area and the terms are not always used consistently. 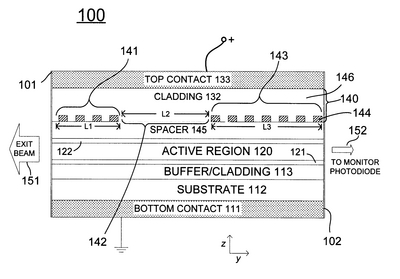 Where FP, DFB, and DBR types describe how the longitudinal reflections that provide laser feedback are produced, the designation gain-guided describes how the mode is confined in the transverse dimensions. In a gain-guided laser there is no waveguide patterned between the reflective structures (end facets or DBR regions). Instead, we rely on a narrow region where current is injected to maintain the transverse mode.

This works mainly because any transvese modes that don't overlap the injection region will see much lower gain and so won't lase. 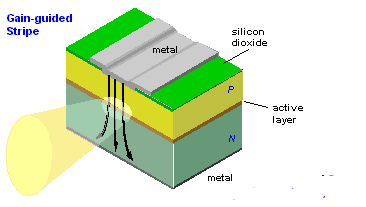 The Fabry-Perot laser is the default configuration for a laser (the usual population inversion, stimulated emission and positive feedback), except of mirrors at either end for creating positive feedback are replaces with cleaved surfaces.

The DFB as you said, has a Bragg-grating in the active region to limit the emission to a single wavelength, since a laser actually emits multiple wavelengths called longitudinal modes.

A Fabry-Perot laser is a resonator that lases at wavelength selected by the gain bandwidth of the lasing medium. These are called longitudinal modes. It will usually lase with multiple longitudinal modes that fall within the gain bandwidth. The cavity modes are determined by the optical dimensions of the resonator. Depending on the dimensions of the cavity, the laser may also oscillate on multiple spatial modes.

A more detailed discussion about the differences between DFBs and DBRs can be found here (http://photodigm.com/difference-between-dbr-and-dfb-lasers/).

Not the answer you're looking for? Browse other questions tagged laser laser-diode or ask your own question.