I'm using a Attiny45 microcontroller and USBtinyISP as my programer, and this is the first time I need to hook stuff up (in this case just LEDs, but eventually I'll want to conect a raspberry pi) to the programing pins (SCK, MISO, MOSI). As I want the microcontroller to be re-programmable when it's all soldered up. I first breadboarded the circuit to make sure it works. This is what I found:

If I have a LED and resistor in series between SCK or MOSI, avrdude throws this error at me:

unplugging the LED gets rid of the error, but isn't ISP ment to allow this?(Arduino's have a LED connected to pin 13 SCK)

However on MISO this never happens and I'm free to upload the program with the LED attached. Why is this? Is there a way to obtain this behaviour on the SCK and MOSI? How is this issue going to be affected if I replace the LEDs with raspberry pi GPIO thru a logic level converter?

Yes they do , but take a look at a typical schematic of Arduino UNO (as an example) 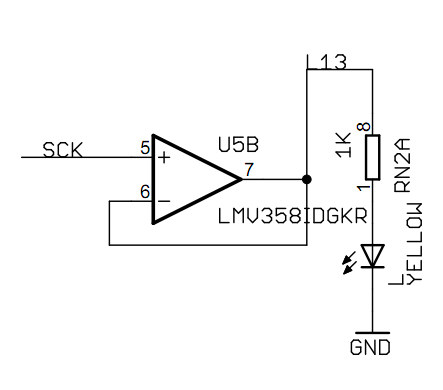 As you can see the SCK pin is connected to an OPAMP wired as a buffer which then drives the LED. The effect of that, is that the SCK pin only sees as a load the high input impedance of the OPAMP, so the pin can be easily driven by the programmer.

However on MISO this never happens

The MISO pin is the slave output and in this case the slave is the AVR which apparently has a higher drive ability compared to the programmer and can successfully drive the output even with the LED attached.

If you want to use a LED then you should ether use a high impedance driver (like an OPAMP, a comparator, a mosfet etc), or you can use a jumper to detach the LED while programming.

Not the answer you're looking for? Browse other questions tagged arduino avr raspberry-pi avrdude isp or ask your own question.

2
atmega1281 + Nokia 5110 LCD circuit works with USBtinyISP plugged in. Hangs without?
4
Why do I get gibrish output to the serial monitor of my arduino mega 2560?
5
Programming a ATmega328P on a breadboard - programmer cannot connect
7
How do I know I have the right Bootloader Installed on my ATMega328P-PU?
2
Unable to program ATmega128 - 16AU using USBasp
7
Using AVRDude to program AtTiny via Arduino-as-ISP
1
ESD SPI/ISP bus protection
2
Getting started with AVR programming concepts