We are using two omni ferrite rod antennas to transmit a signal at 125 KHz. The two antennas are positioned at 90 degrees from each other on the PCB plain, and the device installation is with the PCB parallel to the ground. The device will typically be installed on the ceiling, so we'd like to have good reception in a half-sphere around the device, to the sides and towards the floor.

The mobile receiver also uses two ferrite antennas that are at 90 degrees from each other. Naturally the orientation of the receiver with respect to the transmitter can change.

Overall reception of the 125 KHz signal is good, at about 5-6 meters, but we have some voids. In these voids reception drops to around 0.5-1.5 meters.

These voids are at roughly 45 degrees to the transmitter antennas, but we haven't mapped them all yet: 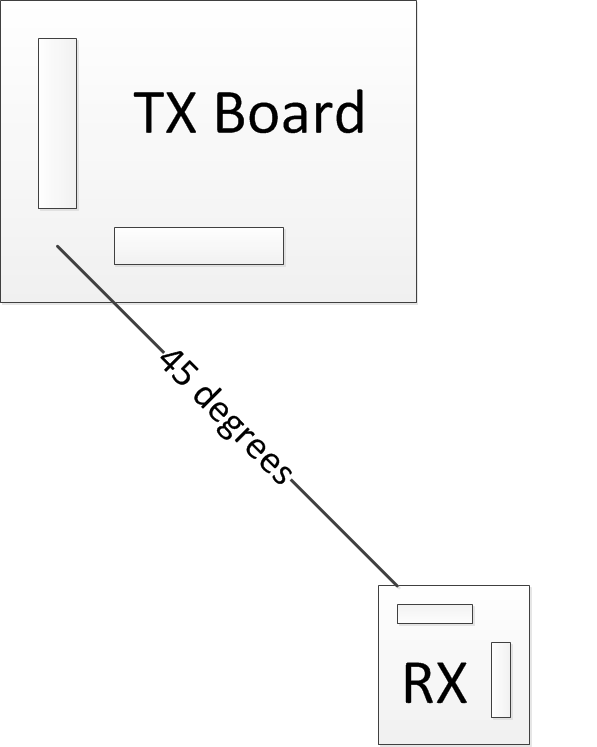 Can anyone give some clues as to why we would have these voids? In theory, having two transmitter omni antennas should cover all voids, no? Perhaps the angle between the antennas should be changed?

Edit: the transmission signal is wired in series to the two antennas. On the receiver side the receiver is wired separately to both antennas (i.e. not in parallel).

It depends on how the two antennas are wired. In general, if you're feeding two antennas with the same signal, you're not going to get "omni" coverage, you're just going to shift the directionality to a new angle. For example, a single loopstick has a figure-8 pattern, with nulls in two directions. Two loopsticks wired in parallel will still have a figure-8 pattern, but the nulls will point in different directions.

The same thing applies on the receive side. If you wire two antennas to a single receiver, you're just going to shift the directionality. To get true omni coverage, you need two separate receiver front-ends.

If you can phase-shift the signal to/from one of the antennas by 90° relative to the other, you can create a "circular" polarization pattern that will help mitigate this problem. Now the nulls will be in the plane of the PCB. 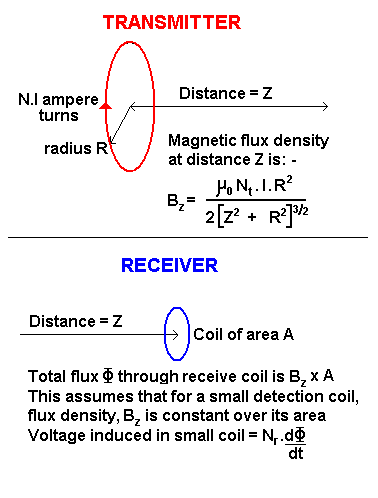 It tells you the flux density at distance Z from a circular coil. Point Z is perpendicular to the plane of the coil and directly below it - this is where maximum flux occurs.