The basic puzzle: how to conveniently view stepper motor current on a scope?

I am building a test fixture to examine the behavior and parameters of small stepper motors and various inexpensive stepper driver ICs. The motors would be size NEMA 8 to 23, < 3A windings, bipolar. The drivers are Allegro A4988, commonly available mounted on a carrier with a standard pinout, such as Pololu A4988 Carrier, with related models of chip and carrier having different voltage and current specs.

I want to be able to display various voltages and currents conveniently; this question focuses on the winding current.

The schematic shows the basic idea: A stepper driver IC implements an H-bridge which can switch current to flow in either direction through a motor winding. There are two such bridges in a typical driver IC, to drive the two windings in a typical motor. 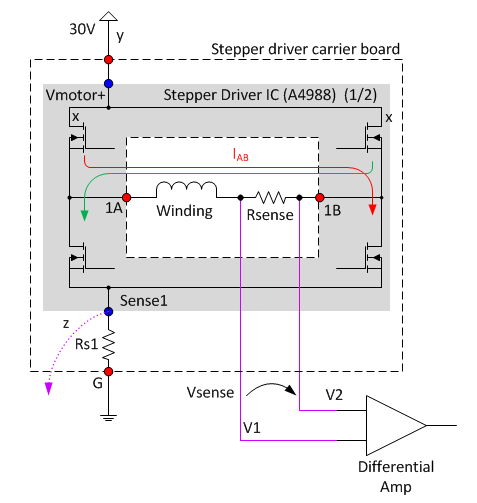 So, the "obvious" approach is to interpose a a sense resistor (here Rsense, say 0.1 ohm), across which to measure a voltage with a differential amp, providing a voltage to the scope. Example current-sense amps: Linear LT1999; Analog AD8216.

Although the DC Common-Mode Rejection Ratio of such amps is adequate (100dB = 100,000) to avoid the 30V difference between low and high states from impinging much on the 0.1V/Amp sense voltage, there is almost definitely a problem with the AC CMRR.

The stepper ICs control the current using PWM, presenting pulses with durations as short as the low microseconds, and rise-times in the tenths of microseconds. To be clear: These pulses are distinct from the change of state when going from one step to the next, and are ongoing even when the stepper is held in a specific position (or micro-position).

So Vsense is in the range of 0 to 0.3V, on top of frequent common 0-30V pulses which we wish the differential amp to reject. Yet for current-sense amps that I've examined, CMRR drops off to about 60dB (=1000) at 1MHz, and 40dB (=100) at 10MHz. It seems that an amp with specs in this range is likely to produce quite a large unwanted output from the PWM pulses.

I've considered various ways to reduce the bandwidth of the two signals seen by the differential amp, but any imbalance in their frequency response, I suspect, for the PWM pulse edges, will precipitate a differential which will get amplified.

Is there some cleverer way out of this puzzle that manages to evade the problems noted above?

Answers that are less than ideal:

I like using the closed-loop Hall effect LEM current transducers for this sort of application. They're a lot cheaper than a genuine current probe for a scope (only about $20 or $25), have excellent accuracy and bandwidth from DC up to a couple hundred kHz. 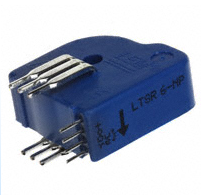 The particular one I've linked has a +/-6A range, but you can put a couple loops through to get +/-3A full scale. Just feed it a reasonably clean +5V and Robert's your uncle.

If you want to make more of a project of it, you can offset the output with differential output between the LEM and a 2.5V reference, or actually subtract it with an op-amp and bipolar supplies, but for most purposes, just adjusting the scope zero will do the trick.

I think your discounting of putting a current shunt resistor at Y is illogical. That sounds perfect to me. You could also place one at G and you will have pretty damn good knowledge of current going into, and out of, your stepper motor. Surely if you are holding position, the distribution of current is equal to each pole? During movement, the current load will shift as required to move the rotor/shaft etc.

Give it a try! Sum of currents into the motor is better than nothing at all, and like I said with some assumptions it's reasonable enough.

If you have a scope, you measure the current through the resistor manually by looking at the voltage built up over a known precision resistor value.

Otherwise, get a current shunt monitor breakout board, for something similar to a Texas Instruments INA138 etc. and examine this component's output voltage which is a linear voltage with relation to current detected. These shunt monitors are specially designed for very high differential sensing and CMRR.

There is some useful application notes on this exact topic by Linear Technology, Here, pages 25 and 26

A very common application of bi-directional current monitoring is in a full or H bridge circuit. If there is access to the supply rails to the bridge, the optimum way to measure the load current is to use either low or high side sensing as depicted by RX and RY in Figure 16

Where in this case, RX and RY refer to current shunt resistors at V+ and Ground as I have suggested.

Not the answer you're looking for? Browse other questions tagged stepper-motor current-measurement or ask your own question.

4
How do I determine the power rating of a stepper motor?
1
When driving a unipolar stepper as a bipolar with a chopper driver, should I decrease the current to prevent overheating?
0
stepper motor driver constant current under load, motor driver powering off losing brake effect
0
Matching Stepper Motor to Driver
2
Why is it harder to turn the shaft of an unpowered stepper motor when connecting the terminals of a phase?
0
Stepper motor waveforms
0
Inconsistency Issues With Stepper Motor
4
Why sometimes a stepper winding is not fully powered?