I'm not sure when or why it stopped working. It would be either while I was messing with the ambient light setup which was working perfectly. I could have accidentally shorted something.

Here is what I have tried so far using a multimeter.

It looks like the TX pin is shorted to the 5v pin. Is there anything I can do to fix this?

Or while trying this. 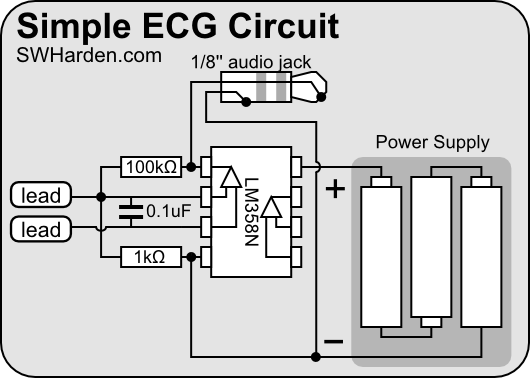 I powered the ECG circuit from the Arduino's 5v pin. I tried to upload a blank sketch (Bare Minimum from the examples) thats when this problem popped up.

In both cases when I use the serial monitor there is no echo. When I type something in serial monitor and hit enter the RX LED on the Arduino UNO blinks but the TX LED does not blink.

Are there any other tests I could do to determine the problem? Should I consider my Arduino UNO dead?

P.S. I have no background in electrical engineering but referring to the EAGLE schematics found on the link below can anyone tell me what I should test for using a multimeter? http://arduino.cc/en/Main/arduinoBoardUno

This may or may not be an answer, but it should be interesting.

First off, your question and other comments indicate that an awful lot of the Arduino is working as expected. Some comments about that:

Now, the fact that you don't see the TX LED light is a key symptom. This could be:

Some tests you can do using the loopback procedure:

Test 1: Is 16U2 able to output to RX? Run the loopback test from the Arduino IDE serial monitor. Make sure the built-in RX LED flashes to confirm that the right COM port is engaged. Set a slow baud rate (like 1200) so that the symptoms will be easier to see. Now connect an LED to the RX header pin, as in the following diagram.

With no communication, the LED should be off, but if you send a message from the serial monitor, the LED should flash. If it does not, then there's a problem with either the 16U2's output, or the path from the 16U2 to the shield header. Regardless, continue...

Test 2: Can we get RX-->TX to work by eliminating part of the path? You can short the path indicated by the curved wire in the following diagram.

You can do that by applying a pointy metal object across the two pins of the '102' (1 kohm) resistor pack, as shown in this image by the red arrows: 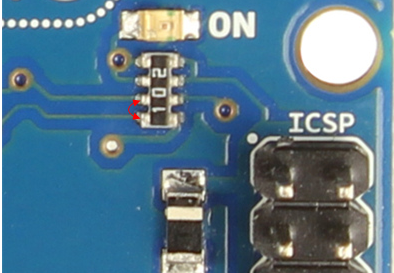 With that in place, perform the loopback test again. If that permits loopback message to make it back to the serial monitor, then there's some issue with the resistor pack, or the traces beyond it.

If it doesn't work, yet the on-board RX LED flashes (confirming a reasonable test) then there's something more obtuse wrong with the 16U2, and probably not much chance of tracking it down.

The Arduino IDE is often quite buggy and sometimes closing it down and opening it again can fix programming errors.

Assuming you've done that, you made the comment "I powered it up from the 5V pin". What does this mean? That you powered your ECG circuit from the 5V pin of the Arduino, or that you powered the Arduino by putting a voltage to its 5V pin? When an Arduino's plugged into a USB port it will draw power from the USB 5V rail. It's not a good idea to connect any other power source at the same time.

The Tx and Rx pins are connected on the board to an ATMega8U2 chip which does the USB-Serial conversion. It's not clear if you tested the voltage with the AVR present or not, but if there's a voltage on those pins it's not necessarily indicative of a fault. According to this SO question the Tx pin is held high when the serial connection is idle.

Generally if an Arduino dies it's because something happened to the AVR microcontroller, which in the case of the UNO is in a DIP socket. You can buy Arduino-bootloader ATMegas for perhaps $5.

I had the same problem and I don't think your your Arduino is broken. You need to upload a bootloader using avrISP MKII (unfortunately you need to buy it for about $30) and you need to flash the file "optiboot_atmega328.hex" located in C: program(x86)/Adruino/Hardware/adruino/bootloaders/optiboot (or a similar location) following these instructions on YouTube: Arduino Tut. #5 - Bootloader Burning with AVR ISP MKII.

I am quite sure it will work for you as I had an identical problem. It seems without flashing the file above the IDE does not recognize that there is a microcontroller connected at the other end. I have tried with 2 more new ATmega328 and when I try them I get the same behavior until I flash the bootloader and the problem is fixed.

If you buy a new Arduino maybe it may work directly or you might get the same problem. So it is up to you as it is difficult decision to take.

Im having the exactly the same problem. I had tried most of the method suggested online and still cant. Lastly, i just simply tried to replace a new 328 chip (board still the same), surprisingly, it works!!

2
Unable to upload Arduino sketch to Arduino Uno using AVR ISP MKII and Ubuntu 12.04
5
How to resolve this :Arduino UNO not working with Arduino wifi shield?
3
Arduino Nano v3 atmega 328p avrdude: stk500_getsync(): not in sync: resp=0x00
3
error: avrdude: stk500_getsync(): not in sync: resp=0x00
0
Arduino Board malfunctioning
0
How to run Arduino-on-breadboard at 3.3V and still have USB communication to PC
0
arduino IDE isn't able to load skethes to my arduino mega board
0
Arduino as ISP programming the Arduino, not the connected ATmega328P
0
Can't upload sketch to my custom designed arduino Uno