What are the most important characteristics to look for in a MOSFET for switch a precision 50nA load?

The MOSFET should be able to switch the load on or off within 1us. The overshoot/undershoot while switching should be minimised.

Here's a simplified schematic of the circuit I'm describing. 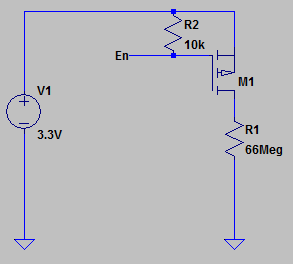 The load is at 3.3V and the 66M Ohm resistor gives very close to 50nA current when M1 is switched on. This is affected by the Rds_on of the MOSFET but with a 66M Ohm load resistor it's going to be negligible for pretty much any reasonable Rds_on.

Overshoot/undershoot is fine as long as the voltage at the load (non-grounded terminal of R1) does not go above 3.3V or below 0V. 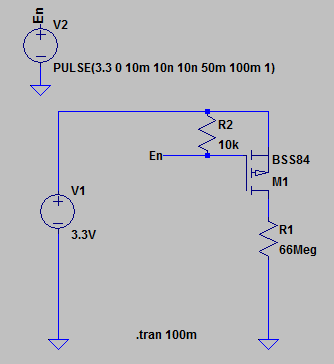 The transistor is a BSS84, the En pin is fed the following waveform:

The rise/fall time of this signal is 10ns.

Here is the current through R1:

The turn-on response is quite fast, the rise time from 0nA to 50nA is 14ns. There is some undershoot of 3.7nA. The turn-off response is terrible, the fall time is 18ms from 50nA to 50pA. There is also 6nA of overshoot.

During turn-off, the current/voltage drops very quickly until the load voltage is 2.1V then it decreases slowly like a capacitor is discharging.

I want the load current to drop to 0A within 1us ideally. I presume this could be accomplished by finding some way to drain the drain-source capacitance of M1 quickly once M1 has been shut off. I tried using another MOSFET as per the circuit below but it didn't achieve what I wanted. 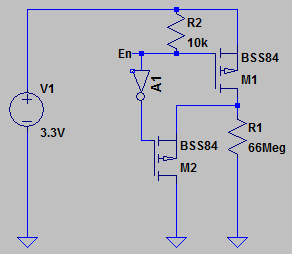 I replaced the P-channel M2 with an N-channel and it seems to work well: 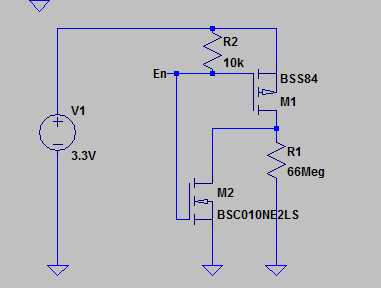 The current through R1:

Why was everyone saying this would be so difficult? Am i missing anything here?

"Why was everyone saying this would be so difficult? Am i missing anything here?"

Does it bother you at all that the BSS84 used in your model has a leakage spec that is about 2X the 50nA you are trying to switch?

Single MOSFETs are designed for low Rds for die size, not so much for switching extremely low currents (although tcrosley found one that will almost do what you want). To switch low currents like this, one would use a low leakage analog switch. For example something like DG2012 might work.

Remember that all models are wrong, and it is up to you to figure out if it is right enough to be useful.

The SD5000 quad N-channel MOSFETs have extremely low drain-source leakage -- typically under 1 nA (although the maximum is 10 nA). Typical Vgs is under a volt. Turn on and off times are typically under 1 ns. It is rated to handle ±10v signals.

They are available in a DIP package at Future Electronics.

Not the answer you're looking for? Browse other questions tagged mosfet current-measurement or ask your own question.

1
Using BSS84 P-channel MOSFET
2
gate current direction during turn-ON of P-channel mosfet
1
P-Channel Depletion Mode MOSFET for Negative Pulses
1
Why do most N Channel MOSFET Circuits have the Source Pin tied to ground? + Circuit Question
0
Switching a Step Up Converter with Mosfet
3
MOSFET reduces LED switching time - why and how to resolve
2
Overshoot on MOSFET drain
0
How to measure small AC mains currents from a microcontroller?
0
N-MOSFET switching behavior when turning off