How to combine PC's power and HDD LEDs?

I'm going to buy a PC tower case which has only one LED intended to be used as the power LED, thus no HDD LED is available. My intention is to have that single LED at about 50% of its intensity when the PC is turned on and there's no HDD activity, and to have it at about 100% brightness to indicate HDD activity. Thus, it would become some kind of a "hybrid" LED indicator.

I'm not sure how the LED outputs are actually constructed on the motherboards, so my initial thoughts were to use optocouplers. Please keep in mind that I'm nowhere close to being an expert when it comes to designing electronic circuits, even the simple ones. So, here's what I had in mind: 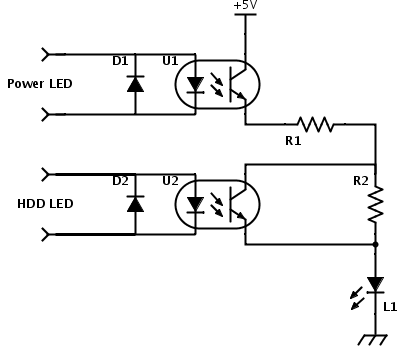 I haven't calculated the resistors yet, though having 220 ohms in all places should be fine -- or at least it looks to me like that. Also, I haven't looked yet at exact optocouplers and their CTR values. Could the whole thing be made simpler without risking to damage the motherboard which is an expensive one?

UPDATE: Based on a reply below, here's how a simplified circuit might look like. It would also handle ACPI sleep states when there's no +5 V from the PSU except the +5 VSB, and the power LED blinks in such cases. Would it work?

UPDATE #2: Yeah, it should work as pointed out below, and it also cuts the required number of components in half. I'll try it out once my tower case arrives so I can see which brightness level works well, and I'll report back.

UPDATE #3: D1 is redundant, as the LED inside the optocoupler can't be damaged by receiving a reverse voltage coming from the motherboard's HDD LED output.

Seems like it would be simpler to use only one optocoupler, and shunt it with a resistor for the (dim) power-on states.

I also think you need more than a 2:1 difference in current for it to be obvious (given the eye's logarithmic response), more like 10:1 for a modern bright LED. You may have to experiment a bit.

As one data point, car tail lights have about a 10:1 ~ 20:1 brightness difference between running and brake lights.

Seeing as there was no recommended answer ...I'm not sure if it would help in this regard but I did something similar that could be beneficial in your needs. It will also take account for any sleep states as well accordingly and is based off a single reverse-biased PnP transistor. I used a 0.15uf polyester capacitor for a more reactive change instead but an electrolytic works just as well if needed. VCC is either of the positive leads from the Power or HDD led from the motherboard header and bases off a negative pull from the ground leads.

From testing, the motherboard I used actually supplies a steady 5v power from the positive leads but instead pulls different voltages down the negative leads, which is what it was based on.

The whole end result is that it essentially 'turns off' the power LED during activity in favour of the HDD LED. It will not combine colours at all. A larger capacitor will result in a longer 'off time' for the power led and introduce a 'fading transition' with large enough cap between them instead but will also raise the cutoff limit for intermittent HDD activity.

Source: Combine HDD and PWR status LEDs into one. - Overclock.net

Edit: Being as I need 50 reputation to clarify the functionality of this. The method it works is based on current starvation. This circuit assumes you are using the current limited 5v input from one of the two HDD/PWR LED headers. Otherwise a 5v source with an inline 100-150ohm resistor works just as well such as powering the front panel through the 5v USB instead. When the HDD LED activates it pulls current from the transistor base and lets through the current that is otherwise going to the PWR LED through the collector. This essentially shuts off the POWER LED since there is little to no current going through it during such activity.

Not the answer you're looking for? Browse other questions tagged led opto-isolator computers or ask your own question.