Given an Op Amp where the output voltage is fed back into the negative terminal, why is the gain one? [duplicate]

Apparently, the gain of this Op Amp is one, but I can't see how I could figure that out. Can someone help?

For now, let's imagine a nice ideal opamp with 0 offset voltage, infinite gain, etc. Think of what would happen if the gain weren't 1. Let's say you drive Vin to 3.0 V. The opamp will then drive Vout to also be 3.0 V.

Now imagine what would happen if it didn't. Let's say the opamp only drove Vout to 2.9 V. That means the positive input of the opamp is 3.0 V and the negative input 2.9 V, for a total differential input signal of 100 mV. Multiply that by the gain of the opamp, and that's what it will try to drive its output to. Obviously it will try to drive Vout as high as it can in this case. However, eventually Vout gets to 3.0 V, the differential input to the opamp is then 0 and it no longer tries to drive Vout high. If Vout went a tiny bit higher, the differential input to the opamp would be a little negative, which would make it try to pull Vout low. Put another way, the opamp will try to pull Vout down if it is above Vin, and up if it is below Vin. Eventually, assuming nothing is externally holding Vout fixed, Vout converges to be the same as Vin.

This can be described mathematically quite easily too. What a opamp does is basically:

From how the circuit is wired, we get:

Substituting these into the first equation, we get:

Solving for Vo as a function of Vin yields:

Apply the basic rules of Op-Amps with negative feedback:

The op amp will try to match the voltage at the input terminals by adjusting the output voltage.

Assume Vin+ = Vin- (from the basic operation of an Op-Amp)

but I can't see how I could figure that out. Can someone help?

If you're not aware of this, below is the justification.

Assume the op-amp has finite voltage gain \$A\$

Now, connect the output of the op-amp to the inverting input with some attenuation \$b\$

Substitute into the previous equation

Now, take the limit as the gain \$A\$ goes to infinity

Thus, for an ideal op-amp (infinite gain) with negative feedback, we have the fundamental result

Negative Feedback can take a little bit of understanding. Consider this diagram: - 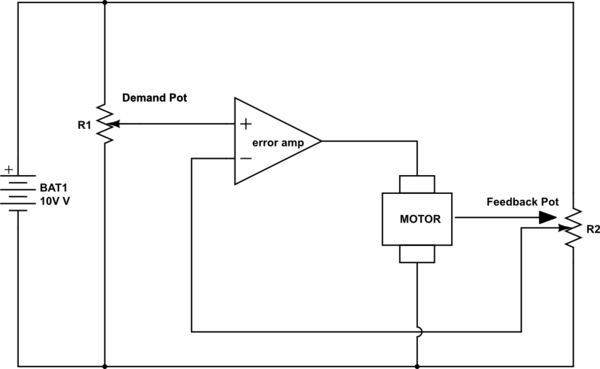 From left to right we have: -

If the error amp had low gain (output = difference between +input & -input), by the time the motor had moved the spindle in the right direction a bit, the output of the error amp might only be a volt and the motor would stall. This tells you that half a job has been done and the two pots are nearly at the same point - if the demand pot was set at 7V, the feedback pot will have moved to either 6V or 8V before the motor stalled.

This is a unity gain op-amp in all but name.

Not the answer you're looking for? Browse other questions tagged operational-amplifier gain or ask your own question.

3
Why are feedbacks connected to the negative terminal of op-amps? Example given
0
Findout output voltage of an opamp when given input voltage and open loop gain
2
Calculating the Gain in an Amplifier circuit
3
Op-amp voltage boost circuit : how does it work?
5
Understanding what is meant by the magnitude of an Op-Amp's gain?
0
How do you calculate the output voltage of an op-amp with DC voltage
0
Opamp Current Sink + FET circuit help
0
Audio being fed back into the circuit, beeping
2
Is it normal that with the same op amp but with a different voltage input, the amplifier gain is different?