How does one find the resonance frequency in a circuit?

Wikipedia and the like give some definitions that are not very useful in practice. I found somewhere(I think on this site but I cannot find it anymore) a definition that said that the resonance frequency is when the impedance is purely real. This made intuitively sense and worked in many cases but I ran into trouble with this circuit:

I found the impedance of this circuit to be:

So is that correct and if so how do you find the resonance in general?

EDIT: My question is

Since the above definition for resonance does NOT work in the circuit above, what is the correct one? and HOW do you find the resonance for a given circuit?

I am considering IDEAL elements only.

So I still don't know how to find the frequency in general.

Your calculation of the impedance seen by the source is correct.

Clearly, there is a 'special' (angular) frequency

Now, let's look at the dual of the circuit given:

For the dual circuit, the impedance seen by the source is

In both of these cases, the pole or zero is on the \$j \omega\$ axis. Generally, they are not.

so how do you find the resonance in general?

In this context (RLC), the resonance frequency is the frequency where the impedance of the inductor and capacitor are equal in magnitude and opposite in sign.

See the "Other configurations" section for your 2nd circuit.

Resonance frequency for sure will be

Your formula for Z must be wrong. You should end up with something like this:

Maybe forget complex numbers, it should be easier with reactances \$Xl\$ and \$Xc\$. We can do that because we considering this as ideal coil and capacitor (vector angles are -90 and +90).

Resonance happends when \$Xl = Xc\$. Impedance vectors for ideal coil and capacitor are opposite so they substract and that makes impedance vector equal zero.

so need to find f here:

with omega will be easier

... (I will short this, this syntax is not friendly to transform formulas "on the fly"

I've made a picture for better understanding of resonance: 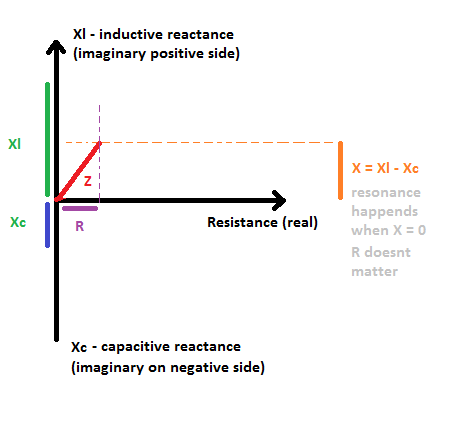 So if resonance happends - in hypotetical ideal LC circuit there are no power losses on reactance. Energy flows from coil (magnetic field) to capacitor (electric field) and it flows back and forth with resonance frequency.

In real life some current cause thermal losses on coil windings. In capacitor some electric field is discharged by resistance between capacitor electrodes. These losses are not affecting resonance frequency but there are some other parasitic losses (inductance in capacitor, capacity in coil etc.), capacity and inductance changes due changes to environment (temperature, magnetic permeability of coil neigbourhood and they may change resonance frequency a bit.

When you have an ideal inductor and an ideal capacitor in parallel, the resonant angular frequency is simply \$\frac{1}{\sqrt{LC}}\$. When there is resistance in series with the inductor or capacitor, it is as if these components are non ideal, and the above equation no longer gives the frequency of maximum amplitude.

You derived this correctly: -

Now what condition would arise that would make the impedance infinite?

It can only be when the denominator equals zero therefore: -

For the 2nd part of the question (non-ideal inductor) you have a formula for omega when the impedance of the RLC circuit is purely real i.e. no imaginary part to the impedance. I'll attempt to prove that: -

Multiplying out we get: -

If you were to calculate where the pole is (irrespective of the complexity of the impedance it's simpler - you need to equate the denominator to zero and use the solution to a quadratic equation to find the complex s value. Denominator is: -

To get the complex nature of s you negate the part under the square root sign and bring \$\sqrt{-1}\$ outside to form the "j" operator: -

This second part of the equation is on the jw axis and represents where the pole's co-ordinate would be along that axis. The first part of the above equation is the real part of s in the pole-zero diagram.

Conclusion - there are two important frequencies in the case of the lossy inductor parallel resonated with a capacitor - how do you learn to get from A to B. Sometimes it's a real battle and you just have to dig a little deeper. I say there's two frequencies but in fact there is another frequency that is important - the 3dB roll-off point but I'm not going there today.

This is a circuit in which the LC "antiresonates" -- at some frequency the combined impedance is infinite (or in a practical circuit, at least maximum). This configuration is used for tuning in AM radio and elsewhere-- as you noted the transfer function becomes 1 at the resonant frequency.

I had the same problem with the resonance freqency. When I asked someone for a general method of finding the resonance frequency of a cirquit, I was told to use the transfer function instead of the impedance accross the circuit.

If we want to use the transferr function, we need 4 nodes (2 for the input and 2 for the output). This makes sense, because the phase shift of a signal is equal to zero at resonance and a signal's phase shift can't be evaluated unless the original signal and the shifted (output) signal are known. 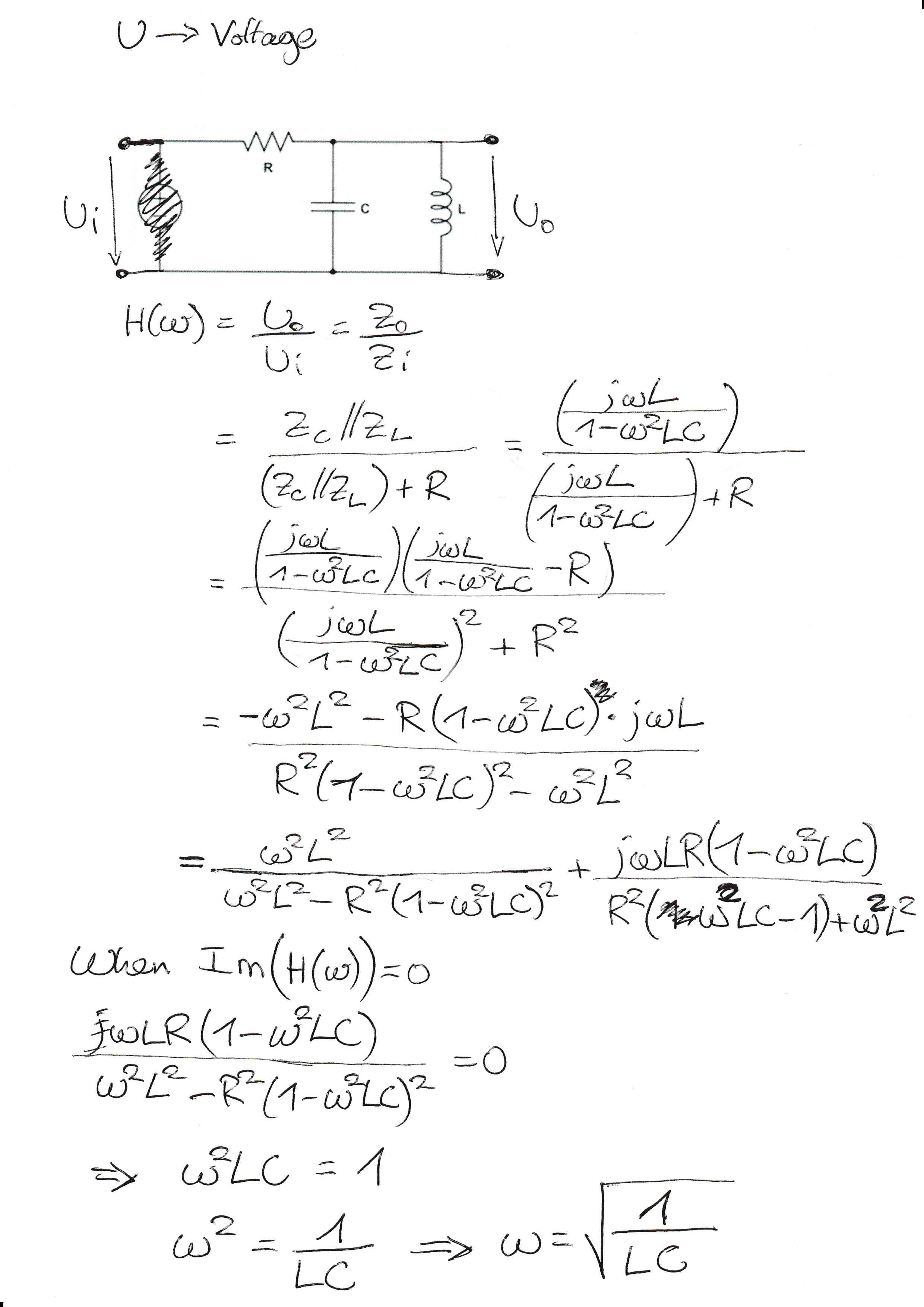 I hope this solves our problem. I haven't tested it on any other circuits yet so I can't guarantee that it always works, but for now I am happy with this method and I don't see any situation where it doesn't work. 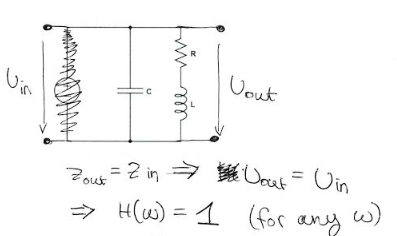 In this case there is no phase shift.

Not the answer you're looking for? Browse other questions tagged resonance or ask your own question.