I am trying to determine if it is safe to apply 24V across a 12V rated motor. I am working on a robot that weighs approximately 150lb and has a friction intensive drive system. I believe the motors are drawing >60A as my motor controller is giving an error.

If I switch to 24V would the current being drawn be cut in half?

Here is the spec sheet of the motor: http://files.andymark.com/CIM-motor-curve.pdf

Thank you for your help

EDIT: Also would it be possible to use two relays per motor instead of a motor controller to allow for the motor to draw higher currents?

Ok, a couple of things:

I would love to hear more about your project so I could better understand your issue.

If you re-wind the coils for the higher voltage (twice the turns), then yes, you would see lower current draw for the same load.

But if you simply apply higher voltage to the existing motor, it will simply force more current through it, not less.

In general, you shouldn't apply more than the rated voltage to a DC motor. First, it will not cut the current in half. But it won't, as the other answers said, double the current either. In a DC motor, current is proportional to torque and speed is proportional to voltage. So doubling the voltage will double the speed. If your load is something like a fan or a pump where torque increases with speed, then your current will increase. If the load has constant torque as the speed increases, then your current will stay the same. If your load is constant power as the speed increases, then your current will actually decrease as the speed goes up. So without more information, it is difficult to tell you how increasing voltage (and therefore speed) will affect current.

Now, all that is assuming you don't have a control. Assuming your control is rated for at least 24 V AND assuming that you dial the speed back down to your original speed using the control, then the current draw of the control (that is, the input current to the control) will decrease. But the current that the control outputs to the motor will stay the same (for the same reason I mentioned above - current is proportional to torque). This will not fix your problem.

You might find these two blogs to be helpful: Controlling Motors With The Talon SRX and FIRST Robotics (FRC) Motor Modeling

They show you how to model/simulate a CIM motor and the Talon SRX controller. You can see how the voltage, current, and mechanical loads all interact. You can see the impact of gearing and multiple motors. 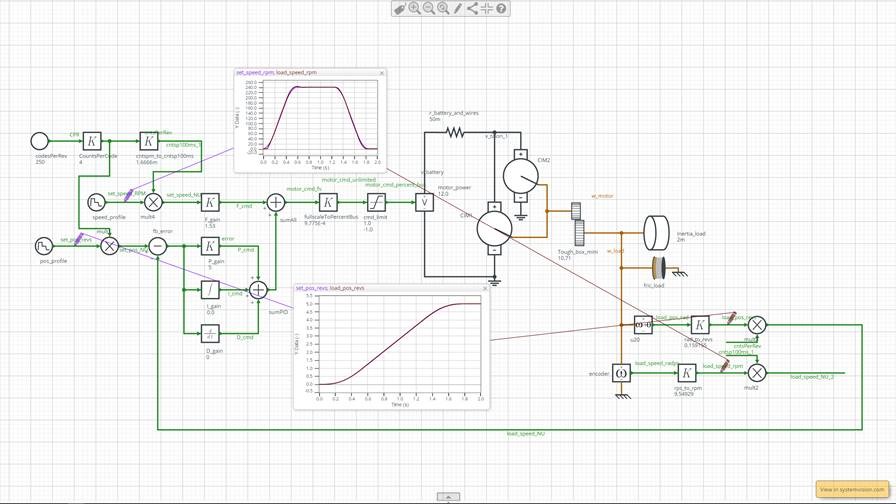 In general, DC motor ratings are based upon whichever of the above would cause failure first under "normal" operating conditions. If for a particular motor one knows which of the above factors was responsible for limiting the specified operating voltage, and knows that particular factor won't apply for some reason (e.g. the limiting factor was #1 but the motor will be operating at an ambient temperature of 4C, and will be operated for short enough intervals that it won't overheat) it may be possible to use the motor at a higher voltage without damage.

It's important to note, however, that even if one could ensure that the factor which had been limiting the voltage wouldn't be a problem, that would only raise the allowable voltage to the point where the next factor would come into play. A motor which is designed for 12V is unlikely to have insulation which is rated for 12,000V even if one could otherwise drive the motor with very short 12,000V pulses without exceeding any of its other ratings.

If the motor's insulation can handle it, driving the motor at 24V half the time and shorting it half the time, switching between the two operations fast enough that the inductance of the motor keeps the current fairly stable, would draw about half as much "average" current from the supply was would driving the motor at 12 volts, and the stress to parts of the motor other than the insulation would be similar to those resulting from 12-volt operation. Some motors would work just fine under such conditions, but others may not. A motor manufacturer should be able to offer guidance as to whether a higher-voltage pulse drive should be usable on any particular device.

Not the answer you're looking for? Browse other questions tagged current motor dc-motor robotics or ask your own question.

3
What is the difference between a 12V and 24V DC motor?
0
Vex 393 motor with 12V supply
2
12V motor running with 24V L293D H-bridge
0
Changing Motor Gearboxes to Reduce Current
0
Looking for extremely high power dc motor controller solution, 120 VAC to 90-180 VDC, 5-10hp range
2
What is the “safe” amount of current I can apply to a DC motor?
0
Issues with 2 motors in series
1
DC Motor and Relay in series with each other
2
Proper way of drawing a lot of current from a 12v Battery