this is my first post here. I’ll just dive in and hopefully learn something. I’m relatively new to electronics, and getting to grips with the terminology etc. Please correct me if I am describing things incorrectly, I want to learn. Thanks all in advance for reading/responding.

Here is a circuit I am looking at: 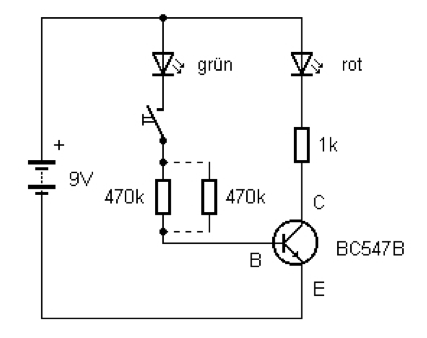 I’ve constructed it on a breadboard and indeed it works…. the description in the booklet I have here is:

ok. In general I understand it. But I have some questions.

I understand that the resistor in the load circuit is smaller, and as a consequence not slowing the current down much, so a higher amount of current could ‘potentially’ flow through the circuit (if sufficient current is applied to the base to enable electrons to move from emitter to collector ->1. am I correct in saying that electrons move from emitter to collector, when the base current is applied sufficiently?) I understand that up to a certain point, the amount of current applied to the base collector incrementally increases the amount of electrons that are allowed to pass from emitter to collector, and therefore the LED in this circuit becomes progressively brighter. It is ‘amplified’ according to the above description - although I find the word ‘amplified’ confusing, it seems more that a gate or door is made slightly open, permitting a greater degree of current to pass through - for me, using the term amplify seems misleading somehow, ->2. although it may just be my limited understanding at this point that causes this confusion?

Another thing I find confusing, is trying to visualise the flow of current/electrons within an NPN circuit such as this, by means of understanding electron flow (from - to +), not conventional flow. It is my elementary understanding at this point, ->4. however what is occurring, from an electron flow point of view, when I close the control circuit and apply base current? ->5. By closing this control circuit, electrons actually begin to move from emitter to base first? Sorry if this seems a ridiculous question, I seem to be stuck on something here and need to move past it before comprehending more on a deeper level.

->6. Finally I don’t understand this aspect of the description: “Between collector and emitter there is only a very small voltage drop of about 0.1 V. The collector current is already limited by the consumer and cannot increase anymore. Between base and emitter there is a voltage of about 0.6 V which changes only slightly with a change in current.”

Could someone please elaborate on this for me?

I have numbered and highlighted my questions to hopefully make it a bit easier to respond to my confusion.

Any assistance would be greatly appreciated. many thanks.

In cases 2 and 3 there is current flowing from the collector to the emitter.

You can saturate the BJT by attaching a smaller load (i.e. higher resistance) than the linear limit allows. Think of a pipe with a valve. If there's something clogging the pipe upstream, at a certain point no matter how much you open the valve you're not going to get any more fluid flowing through the valve.

Yes, the electrons do literally move to generate the current, though this isn't directly used for most electrical engineering analysis.

For most EE analysis we don't consider the motions of charged particles directly, instead relying completely on the abstract concept of current. This is an approximation of reality, but it turns out to be remarkably good in most cases.

Ironically, in my day-to-day work with plasma physics we do consider the motion of charged particles instead of relying on abstract currents because the analysis does differ depending on what species are moving and where/how fast they are moving.

An amplifier never creates power, it always limits it. The amount it is limited is the "gate door opening and closing". We call it an amplifier because the amount of electrons allowed through the door is much greater than the number of electrons controlling the door, so it is the control signal that is amplified, or appears to be amplified.

For instance the small signal of millivolts and milliamps entering the signal input of an audio amplifier controls an output of tens of volts and several amps at the speaker.

Not the answer you're looking for? Browse other questions tagged transistors amplifier npn or ask your own question.