Control 12 solenoids with a raspberry pi

I'm a musician and I'm working on a funny project : control solenoids with a midi keyboard.

So I have a MIDI keyboard connected to my raspberry pi connected to my breadboard. Until now everything is working correctly with 12 LEDs, every time I press a key, a different LED is turned on.

Where I'm stuck, mainly because I lack of electronic and electricity education, is where it come to control the solenoids, I don't really know how to power them, and how to prevent the raspberry from frying.

I've planned to use 12v solenoids using 1.4A

Here is what came out of my researches on the internet. Please warn me, correct me, (help me) if something is wrong...

I hope I was clear, thanks you very much for your time and answers :)

From the datasheet, the TIP120 has a minimum current gain of 1000 (probably a little more than this at 1.4A, see figure 1). This means that for a 1.4A solenoid current through the collector pin, at least 1.4mA must be supplied into the base pin by the Raspberry Pi. However, for this type of switching application the transistor should be turned on 'strongly', and this is done by putting more base current into the transistor - perhaps four times the minimum 1.4mA, or 5.6mA.

The Raspberry Pi's maximum output current across all GPIO pins is 50mA (see this question and links therein), with a maximum of 16mA per pin. This means that with the TIP120 transistor you would only be able to power a maximum of 8 solenoids simultaneously. If this is acceptable, (and you are enforcing this limit in software), then the following circuit should suffice. I think this is roughly what you are suggesting, but the LED has moved in order to minimise the current drain required from the Raspberry Pi. 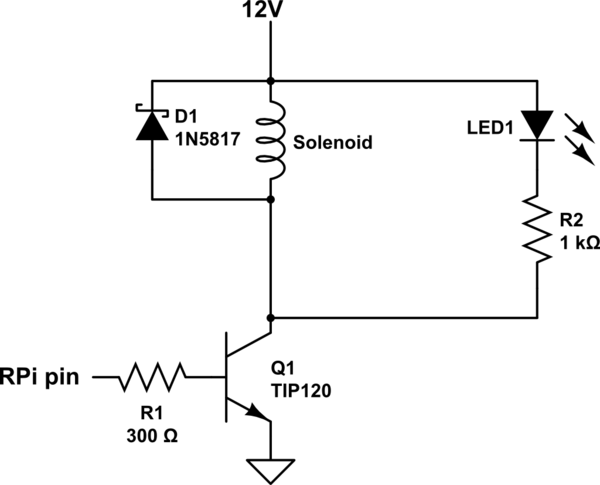 The voltage at the collector of the transistor when turned on is about 0.8V (datasheet figure 2, V_CE(sat) figure). Assuming a couple of volts drop across the LED, this means that a resistance of 1Kohm for R2 gives about 9mA through the LED - a value suitable for most LEDs, but check the datasheet for your particular LED.

The flyback diode conected across the solenoid could easily be a 1N4004 as suggested, but a fast Schottky type diode, as illustrated, is marginally preferable.

Since the voltage between the collector and the emitter of the transistor is about 0.8V, and the current is about 1.4A, the transistor is dissipating about a 0.8V*1.4A = 1.12 watt of power as heat when turned on. Though the datasheet lists 2W as the maximum power dissipation (when the device is in a 25°C ambient temperature), the device will probably get hot -- 100°C or more. I would advise putting a small heatsink on each transistor.

If you would like to run all 12 solenoid valves simultaneously, you will need to use a different transistor, and a MOSFET type is probably the best choice. There are MANY available, but something like the NXP PSMN017-30PL ( http://www.farnell.com/datasheets/1596019.pdf ) or PSMN022-30PL would work very well. It could replace the TIP120 in the circuit below without any other modifications to the circuit - and would not need a heatsink.

Seems good to me. The transistors used as a power switch may not be the best - their DC current gain means your R-Pi will have to output ALOT of base current into each Transistor (and with 12, that is far more than your R-PI Can or should put out at the same time), especially if you want the best (lowest) voltage drop over the transistor. I suggest you get a MOSFET with a very low turn-on voltage (1-2V VGS Threshold)

You can use a 3-cell Li-Po battery pack, with whatever Amp-hour capacity you need for approximate length of operation. If you are constantly pulling 1.4A, then a 5 Amp-hour battery pack will supply you for ~3 hours down to 11V when things probably will stop working, for 12V devices. Obviously if you only have the solenoids on average activated 10% of the time, you will get ~30 Hours out of the battery charge.

I suggest you put a 5Watt power resistor (maybe 8 Ohms, for 1.4A at 12V) just in case of short circuits but one that should not limit your device during normal operation.. I guess you should play with these values though!

Not the answer you're looking for? Browse other questions tagged power-supply transistors raspberry-pi solenoid or ask your own question.