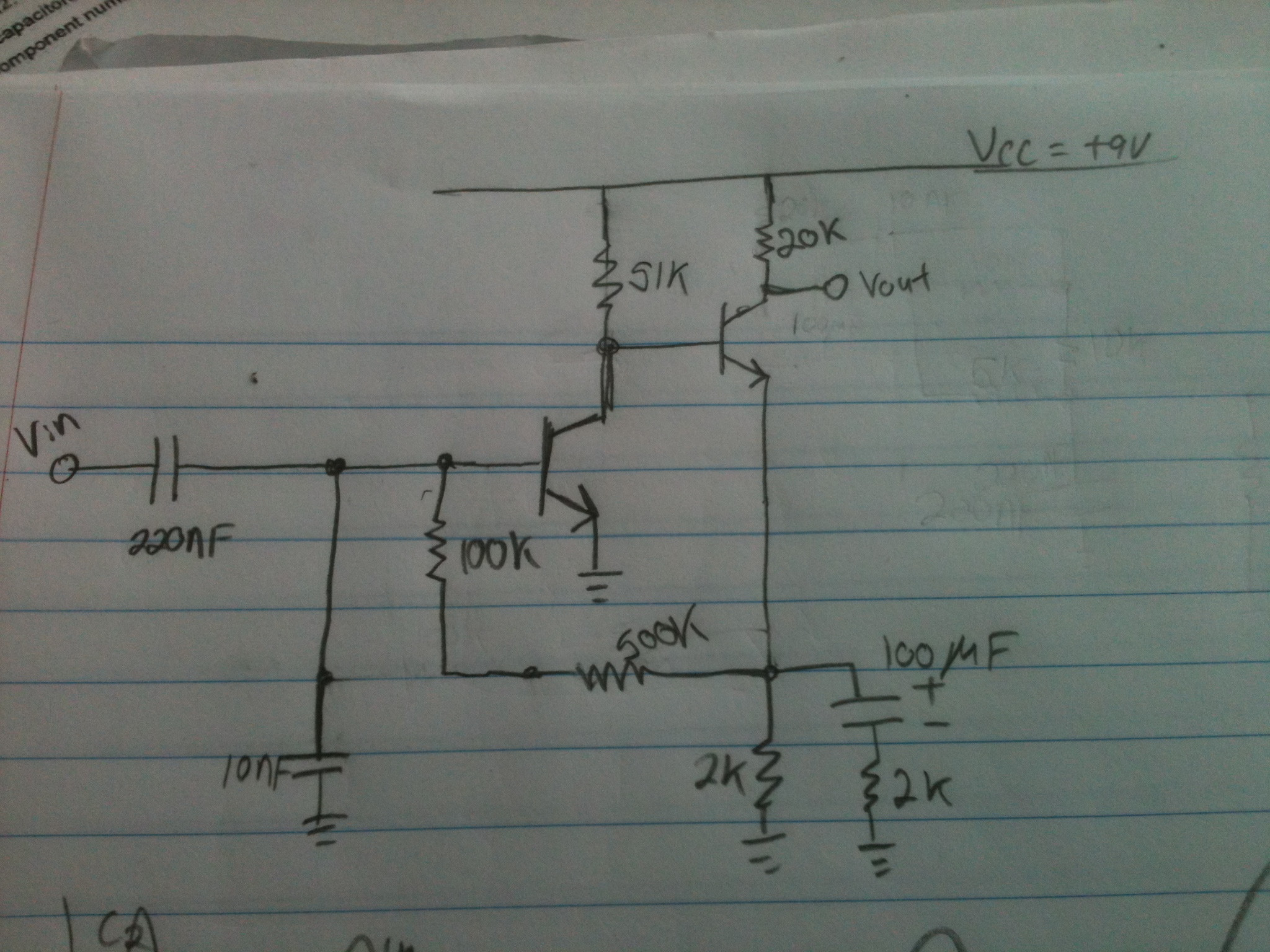 Im trying to analyze this piece of circuit and the feedback between the second transistors emitter to the base of the first transistor is confusing me. Does anyone have any ideas how to analyze the input/output characteristics and frequency response with it?

You need to find out the DC bias/operating point, i.e., DC steady. You can iterate or create the equations and solve directly. You will need to make assumptions for Beta, Vbe1 and Vbe2. Once you know the DC currents flowing in each transistor you can move on to AC small signal analysis. It's required that this circuit bias transistors into their active region. The design as it is will cause Q2 (the output transistor) to be in saturation. You need to reduce the 20kohm resistor or increase the 2kohm resistor. Using a 6k instead of 20kohm will bias at ~VCC/2.

Next you solve for the loop gain (T) which is gm1*51kohm*rpi1/(rpi1+600kohm). This will tell you the stability, bandwidth, and closed-loop input/output impedances. Once you know closed loop input/output impedances (using loop gain) you can solve for closed-loop transfer function. Note that Rpi and Gm will change based on how you DC bias the circuit and the transistor models.

Firstly there's the DC analysis and you know that the bias for the base of the input BJT has to come from the emitter of the output BJT. The bias voltage will be about 0.6V and the bias current is going to be determined by the Hfe of the input BJT and its collector current.

So, to roughly determine collector current, you can assume that under quiescent conditions, the collector voltage will be broadly half Vcc. This is a rough assumption but won't be far out as a first pass. So, Ic will be 4.5V/51k = 88uA. Assume the Hfe is about 200 (another assumption of course) and bias current into the input BJT's base will be about 0.5uA. This flows through 100k + 500k so the voltage on the output BJT's emitter will be: -

0.6V + 600k * 0.5uA = 0.86 volts. Immediately you can see that my initial assumption about where the quiescent operating point of the input BJT's collector is a little wrong - for only 0.86V on the output BJT's emitter, the base of that transistor (and hence the collector of the input BJT) will be about 1.5V. If you are interested in taking this thru another iteration go for it.

For AC stuff the analysis is more tricky and not knowing the source impedance of the signal means you can't realistically make any decent assumptions. Without the 100k+500k feedback, the "open-loop" gain will be several hundred due to the grounded emitter of the input BJT.

This then could be analysed by thinking of this like an op-amp - assuming your input source impedance is (say) 10 kohm, the voltage gain will be approximately 600k/10k = 60. If the source impedance is very much lower than 10k then, the AC gain becomes the open loop gain of the first BJT * 10 (gain of the output BJT circuit).

Not the answer you're looking for? Browse other questions tagged transistors amplifier bjt feedback or ask your own question.

2
When do which assumption for BJT