The general and simplified view of my circuit is something like that:

Using a microcontroller I want to select between two sound signal sources (S1 or S2). S1 is a signal that comes from a microphone (low voltage), S2 comes from an Arduino microcontroller (0-5v). When connected, the signals are aplified and transduced to sound waves by means of a speaker.

I've tried to use a conventional Relay but when switching it creates a spike that is amplified and can be heard. I want a silent switch.

The signals S1 and S2 are never simultaneoulsy "on", so another possibility would be something like that:

Where a device (triac) blocks (opens or closes the circuit), the triac could also be controlled by 5v from the microcontroller. A diode could be placed to block the signal and protect S2.

Looking to a device that could achieve that I found the Solid-State relays and the TRIACs. After trying to understand the differences between them and which could be the most suitable for this application I still have some doubts.

Which scheme and device would you use?

For this sort of application, you can use a simple SPDT analog switch such as the MAX4544: 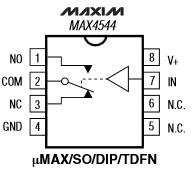 If the two signals are at a different potential then there will be switching noise when you switch, whether you use a relay or a solid state switching element.

If you already know that the two will not be active at the same time, you can probably just use a resister from each to the amplifier input. The resisters will mix the two signals at the amplifier and you will have no switching noise since both sources are always connected.

Not the answer you're looking for? Browse other questions tagged arduino relay signal triac or ask your own question.

3
Using a triac to switch audio signal for laser maze
5
Control AC load with microcontroller. TRIAC behaviour problem
2
Why does a triac trigger with gate current in either direction?
1
Triac(s) as SPDT switch in a DC environment
1
Triac misfires because of noise from inductive loads
0
Triac power dissipation
1
Can a triac work with MT1 and gate reversed?
1
Triac driving motor with limit switch, needs protection?